Going Rogue is the title of Sarah Palin's soon-to-be released memoir. It's cute, it's catchy and it will sell some books. The 400-page tome will hit the shelves on November 17th, with a massive first printing of 1.5 million copies. And each one of those book jackets is another jab at two of the many casualties of the Palin administration in Alaska.

Politico reports that the phrase has its roots in an Oct. 20 story by Slate's John Dickerson, with the lead: "Has Sarah Palin 'gone rogue'?"

But those of us who live in Alaska, and who have been following this story from the beginning, know the real root of that phrase, and will understand the ugly irony of Palin's title.

During the ethics investigation of Sarah Palin now known as "Troopergate," that phrase became seared into the collective consciousness of Alaskans. Palin's spokeswoman Meghan Stapleton used that word referring not to Palin, but to former Commissioner of Public Safety Walt Monegan. Palin had pressured Monegan to fire her ex-brother-in-law, Trooper Mike Wooten, whose nasty divorce from Palin's sister had left bitter feelings. Monegan refused to fire him, and was subsequently dismissed by the governor, leaving the Department of Public Safety without leadership and leaving many Alaskans with a bad taste in their mouths.

In a stinging press conference, Stapleton said that Monegan, a particularly well-liked and respected public servant, former police chief and ex-Marine had displayed "egregious rogue behavior." Stapleton, who had been a respected news anchor before her association with Palin, suffered withering criticism from Alaskans on both sides of the political spectrum. Alaska is a small town. Monegan was no "rogue," everyone knew it, and the use of the term disgraced her.

What had Monegan done, according to the governor, that earned him this brand? He had planned a trip to Washington D.C. to seek funding to help combat sexual assault in a state that leads the nation in that category. Rogue, indeed.

In September of 2008, Alaskans for Truth held a rally in downtown Anchorage. More than 1500 Alaskans showed up to protest the administration's handling of "Troopergate," the insinuation of the McCain campaign's attorneys into Alaska's Department of Law, and the outrageous behavior of Meg Stapleton, then Attorney General Talis Colberg, and Palin herself. One of the speakers at the rally was Betty Monegan, the mother of Walt Monegan, who carried a sign referencing the outrageous accusations made by the Palin administration. 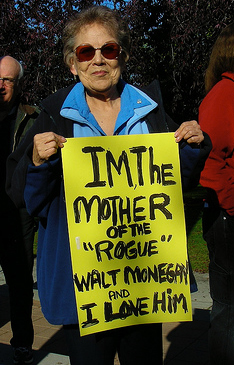 But Monegan was not the only one to stand accused of being a "rogue." Mike Wooten, the infamous ex-brother-in-law was called a "rogue trooper" and Palin said he was a danger to her family and to the public. She made it clear that in no uncertain terms that being a "rogue" was not a good thing. These accusations were soundly refuted by Steven Branchflower, an independent investigator hired by the bipartisan Legislative Council to investigate Troopergate.

"I conclude that such claims of fear were not bona fide and were offered to provide cover for the Palins' real motivation: to get Trooper Wooten fired for personal family reasons," Branchflower wrote.

The Branchflower report states Todd Palin used his wife's office and its resources to press for Wooten's removal, and the governor "failed to act" to stop it. But because Todd Palin is not a state employee, the report makes no finding regarding his conduct.

The bipartisan Legislative Council, which commissioned the investigation after Monegan was fired, unanimously adopted the 263-page public report...

The Branchflower Report was to find Governor Palin guilty of abusing her power as governor under the Alaska Executive Branch Ethics Act. Attorney General Talis Colberg would ultimately resign his position, and Todd Palin and several administration officials would be found guilty of contempt of the Legislature for ignoring subpoenas.

Trooper Mike Wooten ended up with a desk job because Palin's accusations that he was a "rogue" and a danger to the public had brought about threats that made it impossible for him to work out in the open as a trooper, despite the findings of the Branchflower Report.

Walt Monegan was denied a request for a due process hearing before the governor-appointed Alaska Personnel Board to address reputational harm because of the insults he endured from an administration who chose to call him a "rogue." That's the same board to which Palin filed a complaint against herself, and was subsequently cleared of wrongdoing.

And now Sarah Palin apparently hopes to make the term "rogue" impish and endearing, and hopes it will help her sell a lot of books. But that term is no such thing to many Alaskans. It wasn't "cute" when it was used as a finely sharpened tool in the Palin toolbox, used to malign the characters of those who stood in the way of her power scramble to become the Vice President of the United States.

She may have fooled her ghost writer, and the folks at Harper-Collins, and she may fool many of those in the Lower 48 who will wait on line for their copy of Going Rogue, but she will not fool Alaskans.