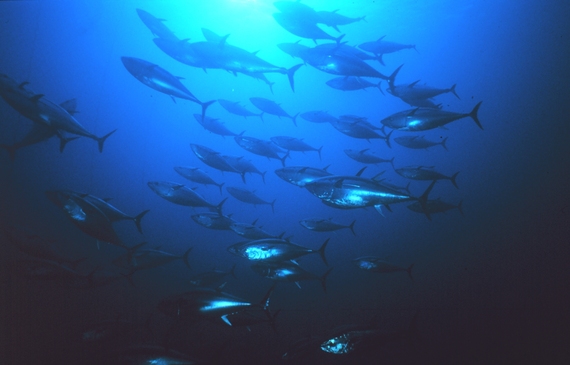 Today, on World Oceans Day, let's contemplate the state of our seas. Picture yourself perched on your favorite coastal bluff, surveying an endless expanse of blue-green water that stretches beyond the horizon and around the world, covering about three-quarters of the planet's surface. Now imagine what lies beneath the surface.

Humans have been depleting and polluting the oceans since the beginning of industrial times when we hunted whales nearly to extinction. But as our population soared and our technologies advanced, we're now doing damage on an unprecedented industrial scale. We've withdrawn about 90 percent of the large fish and deposited enough carbon, plastic and other pollutants to dangerously alter the chemistry of oceans that once seemed inexhaustibly vast and resilient.

The surface still shimmers, but down in the depths is where the truth lies. It's where the accounts are being kept, where Mother Earth is running our tab and preparing to send us the bill. Even the massive gillnets and thousand-hooked longlines of the modern fishing industry have passed the point of diminishing returns.

Overfishing is the most obvious indicator of the toll that we've taken from our oceans, written in cautionary tales such as Cape Cod and its disappeared namesake, the sardine fishery that recently collapsed off the coast of California's once-thriving Cannery Row, and bluefin tuna in both the Pacific and Atlantic Oceans that even the top-dollar prices paid by wealthy Japanese sushi-lovers can't convert into sustainable harvests.

I could go on and on, telling stories of overfishing in every language and sea in the world. Desperation over depleted fisheries drives slavery in Thailand and piracy down in the frozen waters off Antarctica. But the real story on World Oceans Day runs deeper than that. We've begun to grapple with overfishing, using science-based regulations to restore some once-depleted fisheries, but we can't seem to muster the political will to take on the bigger, longer-term, more fundamental issues.

Our over-reliance of fossil fuel is playing out in our oceans even more vividly than it does on land or in our atmosphere. The vast majority of the heat and carbon emissions created when we burn oil or coal gets trapped in our oceans, where it's causing acidification and dead zones that could destroy half of all aquatic life by the end of the century. The rising seas that accompany global warming could also displace billions of people around the world, adding social unrest to the ecological imbalances that we're creating.

The oceans are also accumulating vast amounts of plastics, a throwaway product created by fossil fuels. The latest studies estimate there are about 130 million metric tons of plastic in the world's oceans, and that more is accumulating at a rate of 5-13 million tons per year. Much of it comes from plastic bags and packaging and industry's insanely stupid idea of placing plastic microbeads in beauty products designed to go down the drain and out into the ocean. These plastic particles absorb toxins along the way to being consumed by fish and working their way up the food chain.

Much of this oil is pumped from or transported along the world's oceans, at great cost to the natural world and the prospects of future generations. The devastating recent oil spill along Santa Barbara's coastline was just the latest reminder that oil production is inherently risky and does lasting damage to the environment with predictable regularity. It's a lesson that we don't seem to learn from shocking "accidents" like the Exxon Valdez and the Deepwater Horizon, from whose spill the Gulf's porpoises and other creatures are still dying, five years later.

Now, the federal government is allowing Shell to drill in the Arctic this summer (unless the Center for Biological Diversity, where I work, and a coalition of 11 other conservation groups succeed in our lawsuit to block the project). Even the Department of the Interior acknowledges that spills are likely in such a harsh environment, and that they would be impossible to clean up. This is madness, and the oceans are paying the price for our folly.

So on World Oceans Day, I have a simple message: Leave it in the ground. Fossil fuels hurt our oceans during extraction, transportation, combustion and in collecting our waste. We must stop overexploiting our oceans and bring balance and sanity back to our relationship with the sea and the life it supports.