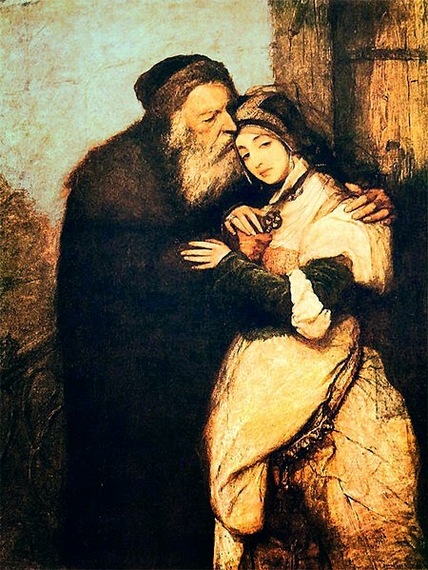 Most people think the title of The Merchant of Venice refers to Shylock, who is the most prominent character in Shakespeare's play. But the title page plainly identifies Antonio as "a merchant of Venice" and Shylock simply as "a Jew." This is, in some way, odd since Shylock is the one that Bassanio goes to when he needs the money. Antonio, who is the shipping business, doesn't have the dough. And therein lies the germ of at least one of the many conflicts the play illuminates. Shylock cannot be a real merchant since being a Jew he would have been excluded from many of the activities of the merchant class, of which Antonio is a member. He's condemned to the shadows of commerce, marginalized and made to feel as if any pretensions he might have to respectability were manifestations of a false self. Indeed Antonio looks down on Shylock for being a moneylender. And Shylock is in turn contemptuous of the Janus-faced individual who has no qualms about seeking help from someone he vilifies to others. Clearly Shylock is as much a merchant as Antonio. Only he's in what we now call finance. To take the racial element out of the mix, Shylock is a Venetian Warren Buffett while Antonio is the owner of one of the companies that would potentially comprise a proto-Berkshire Hathaway. Shylock wants his pound of flesh, but if he weren't suffering from loss aversion, a neuropsychological issue by which people make decisions that are emotionally rather than rationally driven, he might be willing to take a piece of Antonio's action rather than his flesh when his adversary's chickens (aka boats) come home to roost. Of course, for all the mixture of scholasticism and biblical scholarship that the play exudes (with its caskets, rings and bond), reason is hardly what's at work. In one of the most brilliant though not oft quoted passages, Shylock explains his seemingly "motiveless malignity" (to quote Coleridge's famous lines about Iago) thusly,

"So I can give no reason, nor I will not/ More than a lodged hate and a certain loathing/I bear Antonio, that I follow thus/A loosing suit against him."

And later he declaims,

"You have among you many a purchased slave/Which, like your asses and your dogs and mules/You use in abject and in slavish parts...Shall I say to you/ 'let them be free and marry them to your heirs/ Why sweat they under burdens?'...The pound of flesh which I demand of him/ Is dearly bought, 'tis mine, and I will have it."

Even though he's offered three times the amount of the loan, Shylock still refuses to allow it to be paid off. So he's hardly a Shylock, for what he's afraid of losing is not his money, rather the possibility of vengeance against the person who

"hates our sacred nation...my bargains and my well-won thrift/Which he calls interest"

and who called him a

When Portnoy's Complaint was published Philip Roth was criticized for his portrayal of a Jew who masturbated into a piece of liver. Shakespeare, of course, was not Jewish, but the criticism over the ages has been similar. The English critic John Gross wrote a book called Shylock: A Legend and Its Legacy about how Shakespeare's character was used for Nazi propaganda. We live in particularly litigious times where multivalent literary creations run afoul of identity politics. Clearly Shylock's humanity needs no apology. However, let's play the devil's advocate and make one. What would Shylock be today? Perhaps he'd be one of those money managers who refuse to invest in companies that produce fossil based fuels? After all, besides defaming Jews, Antonio's plainly a colonialist. Imagine the degree to which indigenous populations must have been exploited for the sake of the wealth merchants like him sought to accrue?

"Shylock and Jessica" by Maurycy Gottlieb (1876)