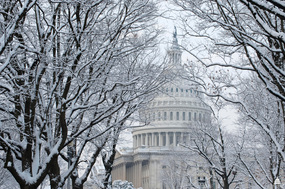 The War on Christmas is our newest holiday staple. Among the stockings and sleigh bells, Fox News and the religious right alike trot out the War on Christmas every year. They rail against the loss of the "reason for the season" and bemoan the absence of the Christ in Christmas. Instead of enjoying this season of reflection and hope that crosses cultures and encircles the globe, many in the tea party stir up controversy and flood the holiday airwaves with resentment and fear.

What those folks don't realize is that there actually is a war going on -- a war on the poor. Time and time again, tea party Republicans have voted to undermine our social safety net, cut vital food assistance programs for hungry children, and most recently, deny unemployment insurance to out-of-work Americans, just in time for Christmas.

As we are still recovering from the worst recession since the Great Depression, our economy has proven that it is not working for everyone. Pervasive unemployment persists, and while unemployment numbers for the country continue to drop, African Americans, Latinos, and young people still have unemployment rates that are unacceptably high.

To cut off this lifeline for struggling families is not only morally wrong, it is economically foolish. Most will say that in lean budget times, we need to tighten our belts and prioritize spending. But, for every dollar we spend on unemployment insurance, $2 is generated by economic activity! Extending this lifeline is not only essential to families across the country, but it's also essential to our nation's fiscal health.

I know firsthand how important this type of assistance can be to families on the edge. In the 1970s, when I was a student trying to raise two boys as a single mother, I was on public assistance. I know I would not be where I am today as a member of Congress if it were not for the generosity that the American people. That assistance was a bridge over troubled water, and it helped me get through tough times. Stories like mine can be found in every state and every city in this country, red, blue, Democrat, or Republican, families in need are coming out of poverty thanks to programs like the Supplemental Nutrition Assistance Program (SNAP), the Women, Infants, and Children, which supports low-income new mothers, and the Earned Income Tax Credit. Not only must we support these programs, but we must provide good jobs that pay a living wage so that anyone with a full time job in this country can provide for their families.

For too long, members of Congress and most elected officials have focused only on the middle class, and of course we must strengthen and support the middle class, but we have families who are low income, poor, and the working poor who are on the brink. We cannot push these families aside, we must protect them and make them a policy priority.

To lay out how our country can care for these families, President Obama recently gave a magnificent speech on poverty, inequality, and opportunity and said, "The idea that a child may never be able to escape that poverty because she lacks a decent education or health care, or a community that views her future as their own, that should offend all of us and it should compel us to action. We are a better country than this." And we are.

Another president believed this as well -- and did something about it. It was 1964, and President Lyndon Johnson announced the War on Poverty, a comprehensive, multi-tiered, national effort focused on tackling poverty. It included programs like Job Corps, Head Starts, The Civil Rights Act, the Food Stamp Act, Medicare/Medicaid, the creation of the Department of Housing and Urban Development, and even the Voting Rights Act.

January 8 will be the 50th anniversary of the War on Poverty, and it's time for us to redouble our efforts to lift everyone out of poverty: children, elderly, new immigrants, communities of color, and those struggling to find a job. That's my hope this Christmas season.