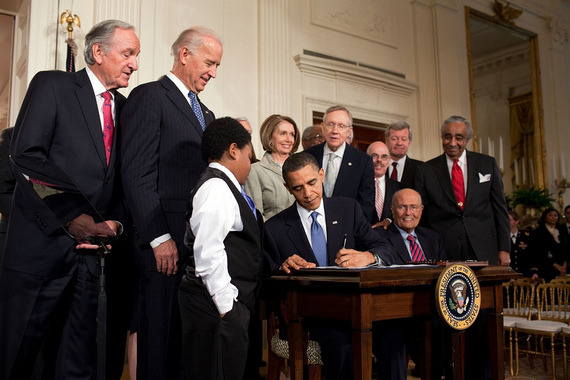 Did you support passage of the Affordable Care Act (Obamacare)? So did the health insurance industry and Big PhRMA, after they cut deals with the authors of the bill.

Why would President Obama and progressive Democrats in Congress (or you, for that matter) support a bill endorsed by these trade groups? Because it was necessary to get something done -- and the result has been health insurance for more than 11 million people who need it, wider access to reproductive care and critical protections for all Americans.

So sometimes doing something really good means becoming temporarily aligned with people you oppose on nearly everything else.

That's also the story of a new bill to fix our broken, forty-year-old chemical safety system. Everyone agrees the old system fails to protect our families, giving EPA almost no power to control or ban toxic chemicals that are sold in products that end up in our homes and our bodies.

The new bill is called the Frank R. Lautenberg Chemical Safety for the 21st Century Act, named for the late progressive champion who spent his Senate career fighting Big Tobacco.

After years of failed attempts and bills that looked great on paper, some Democratic senators decided it was time to do what's necessary to get something done. They started negotiations with the chemical industry and their Republican allies in Congress, who now control Congress.

Over the last couple of decades activists have succeeded in passing a patchwork of state laws and cajoling product manufacturers and retail stores to block certain chemicals -- creating a national headache for the chemical industry and finally pushing them to make major concessions in order to get a more uniform national system.

The state laws only cover a small percentage of the chemicals in use and most states have not acted -- so most Americans are hardly protected at all -- but they have been effective in creating the necessary pressure.

The new bill would:

• Require a safety review for all chemicals in use today.
• Ensure all new chemicals pass a safety check before they can be sold on the market.
• Explicitly require protection for those most at risk from toxic chemicals, such as children and pregnant women.
• Give the EPA new authority to require companies to test new and existing chemicals for safety.
• Keep all prior state actions on chemicals in place, and only supplant state authority when EPA takes the lead on a specific chemical.

Of course, the bill is not perfect. To get the chemical industry to agree to these new powers for EPA, the authors agreed that when EPA takes up a "high priority chemical," its national action freezes new state laws on that chemical. (Though, as mentioned, all prior state actions stay in place.)

So we're left with a dilemma. Support a big improvement over current law even though it's imperfect, or say we won't stand for the shortcomings and forgo any change.

For me, the choice isn't hard. No major environmental law in history has passed without significant bi-partisan support. In fact, all major progressive laws were incomplete compromises -- from the original Social Security Act to the Affordable Care Act.

So holding out for a bill that isn't the result of a compromise means living with the terrible current chemical safety law forever.

(I should also mention that fixing this law didn't happen when Democrats had control of Congress either. So waiting a few years in hopes that they take over isn't a good strategy. And you'll note that the Affordable Care Act passed when there were large Democratic majorities and it still required this kind of negotiation with powerful interest groups.)

What makes all this harder is that, as a result of the negotiations, the chemical industry and some conservative senators now support the compromise. These are names I NEVER expected to see on a bill I support.

And if you take the easy way out and decide whether you support or oppose something based on who's for it and who's against it, rather than looking closely at the content of the legislation, you might draw the wrong conclusion about this one.

I just hope everyone will take a look beyond the strange bedfellows and compare the new bill to the really bad current law. Because doing what's necessary to produce change can't be a disqualifying mark on a piece of legislation, or we'll never get anything done.

Here's some more information on the new bill.