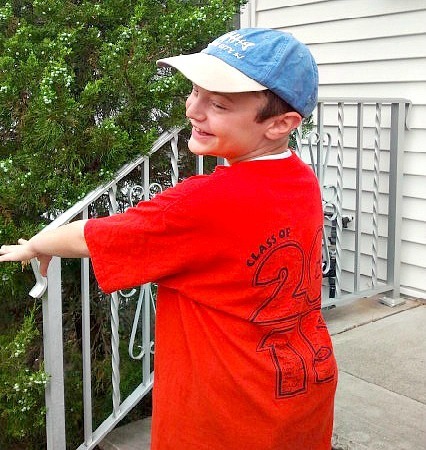 My son will be graduating elementary school later this week. For many parents, this type of event is s a sure fire way of bringing on nostalgia. Maybe some baby pictures will be whipped out and a series of 'remember when' conversations will ensue. I get it. I'm there too.

Many parents will also wax on about how proud they are about their child on this momentous day. But is it really such an accomplishment? Does it warrant a parent feeling pride that their child has finished the 5th grade (or 6th grade - depending on the school). After all, education is compulsory till at least 16 in every state.

Well in my son's case, the answer is simply, yes.

And it's all because of third grade.

Third grade was the year from hell. Any parent whose child has "the school year from hell" can surely relate.
Horrible teacher, calls home, time spent in the dean's office, poor behavior, and loss of confidence. BR was falling apart. And it felt like, despite numerous efforts, there was nothing my wife or I could do about it.

I'd like to say it's all a blur and forgotten. But it's not.

That first day you leave your baby with strangers is a scary day. It doesn't matter if it's a highly recommended preschool, wonderfully referenced babysitter, or a friend of a friend. It's simply uncomfortable. However, if things go okay as time passes, you settle down. Eventually. But there is still a sense of unease. That feeling in your stomach of, "Am I doing the right thing by leaving my defenseless baby with these people?" That's how my wife and I felt during BR's third grade school year. Was our child in a good place? Did the school have his best interest at heart? It surely did not feel that way as many meetings and discussions brought little change.

We considered our options but ultimately decided to wait for the school year to end. And when the calendar mercifully turned June, we had already decided our son would be leaving the private school he was in and attend the public school near our home the following September.

After a number of therapy sessions, BR was making progress. My wife and I, however, were still frayed. So, when September rolled around, we were nervous.

Would it go better in this school? How would they deal with his anxiety? Would he make friends? Would the faculty see how smart he is or be taken in by his challenges and odd behaviors?

Those first days were all worry. The bar for success was low. No phone calls and a full day in a classroom were all we could hope for. If BR talked to someone, learned something, or smiled - well, we'd be way ahead of the game.
I attended open school night. I went in hoping to stand innocuously in the back. I didn't care what they were teaching him as long as he was fitting in and being treated decently. Before I left the classroom, the teacher asked, "Who is your child?" When I answered, she smiled and said "Welcome." No judgement, no concerns. Just a warm smile.
Maybe, this school would be the right place for my bright but challenging son.

By the end of the school year, BR had a good friend. He had a birthday party and a number of boys came. He was upset when he had to miss a day of school because he would miss his friends. And we had gotten reports from teachers of progress. He was participating in the lessons, engaging with the other students, and displaying impressive academic results.

It wasn't perfect or even close to it. Challenges remained. He showed defiance towards teachers. He refused to participate in the school holiday show. But the challenges never felt overwhelming. The teachers, administration, and other school personnel showed a sensitivity to the challenges BR faced that his previous school never did. My wife and I weren't bombarded with phone calls, given a litany of all the problems our son was making, or made to feel as if we had done a poor job of parenting. The teachers worked within his confines and made things as better for him as they could. They partnered with us and said what they were going to do to help BR and what we could do as his parents. We were part of a team whose goal was to bring out the best in BR.How refreshing!

When fifth grade began, BR was ready. He would be having the same resource room teacher whom he (and we) liked so much. He would have class with his two best friends from the previous school year. The continuity was refreshing, and we hoped for growth.

But it wasn't simple or linear. There have been steps in the right direction. BR ran for class representative. When he lost, he was determined to try again next year. BR volunteered to have lunch with autistic children once a week. He willingly did an independent study project and presented it to the school. He participated in the school holiday show (lip syncing). He struggled to adjust to the new relationships between boys and girls. He rebelled against standardized testing. Again, no challenge seem overwhelming. In fact, they seem normal, typical. I know the school will work with BR. I know he will figure these things out and move forward.

The confidence he is gaining in himself. The social skills he is developing. The knowledge he is picking up. I couldn't be prouder.

So, when they announce BR's name at graduation, I won't just be proud of the fact he is moving on to middle school. I'll be proud of the journey he has navigated and the growth he has shown. He went through "the school year from hell" and came out stronger.