In the barrage of issues surrounding the personal character of Donald J. Trump -- his derision of ethnic and religious minorities, his public mocking of the disabled and prisoners of war, his boasts of sexual assaults corroborated by the accusations of his victims, and his general unfitness for the presidency -- it would be natural to overlook yet another deficiency: his warped understanding of economics. Put simply, Donald Trump doesn't seem to understand even the most basic principles of what makes an economy work. And if he were to take office, it is not his myriad character flaws, but his vast ignorance of economics that could most impact you personally. 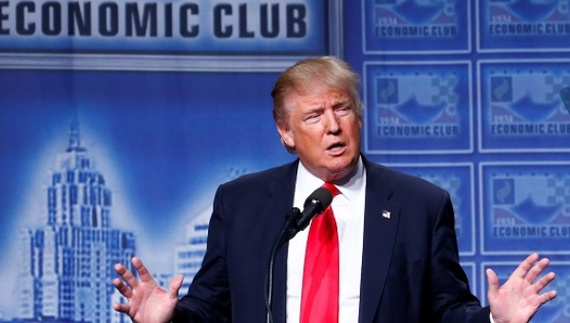 Some may view this as surprising. Hasn't he understood enough economics to amass billions of dollars as a real estate baron? There is no doubt that Trump entered the right industry at the right time, and that his aggressive real estate dealing has paid off handsomely for him. But rather ironically, some of his grossest misconceptions about economics appear to originate from his experience as a businessman, such that he seems unable to distinguish the economic difference between a firm and a country. This misunderstanding seems to underpin nearly every misguided understanding Trump has about economics, and how a Trump presidency could cost many millions of Americans their jobs and financial security.

One of the earliest indications of Trump's confusion was in comments he made about government debt and default. Trump has declared bankruptcy six times, and has obviously learned how to make the U.S. bankruptcy laws work for him. He boasted to CBS This Morning in June of using his expertise in this area to threaten a default on U.S. government debt: "Nobody knows debt better than me. I've made a fortune by using the debt. If things don't work out, I renegotiate the debt. That's a smart thing, not a stupid thing."

But behind this brazen approach to debt lies a gross misunderstanding between the implications of default for a firm and for a country. If Trump's company defaults, it affects mainly his company's credit rating and its creditors. In contrast to Trump's company debt obligations, U.S. government securities form a critical financial underpinning of the world financial system. A U.S. default on its sovereign debt, or even a credible rumor to give a "haircut" to holders of U.S. debt instruments, would send U.S. interest rates skyrocketing, resulting in trillions of dollars in added interest payments on our burgeoning national debt, and catastrophic worldwide economic instability. Was your job threatened in the last recession? Then consider it lost under the catastrophe that would ensue under a President Trump debt plan.

Trump's ignorance about financial macroeconomics extends to his (mis)understanding about the nature of international trade. Fundamentally, Trump understands economic life (and maybe all life) as a zero-sum game. In the Trumpian worldview, economic transactions create winners and losers, where the goal of course is to become a winner like Trump. The problem is that this is not how the economy works. Economic transactions are motivated by mutual gain; economic life is rarely zero-sum. When I take my kids to buy ice cream, it is not that the ice cream man is a winner and we are losers. (Just ask my kids). We both win because I am willing to pay more for the ice cream than the price for which the ice cream man is willing to sell it. It is the same in international trade, although trade is a little more complicated. Trump perpetually complains "We always lose in international trade..." "The Chinese are killing us..." And that "NAFTA was the worst trade deal in history."

Let's break this down. First, we import products from countries like China and Mexico because they offer consumers a better value for their money than the same product produced domestically. That we are able to pay, say, only $40 for a decent pair of shoes dramatically increases the real income of American consumers, the range of goods our salaries allow us to afford. Benefiting most from these low prices are the poor in our country and working-class folks with modest incomes. We do not place 45% tariffs on Chinese goods of the kind Trump advocates because this would be equivalent to reducing the real income of Americans, virtually the same effect as finding out your boss just decided to significantly reduce your paycheck for the same amount of work.

Trade surpluses are not the same as company profits. Trade deficits are not the same as company losses. To view them this way (as Trump does) is to display a complete ignorance of international economics. Moreover, international accounts always need to balance. Of the dollars used to pay for the goods we import from China, the Chinese use most of these dollars to buy things that we produce (which typically pay a greater wage than one gets making shoes), and the rest of it comes back in investment. Now if we don't like the Chinese using some of those dollars to buy American treasury bills, then we need to reduce our government deficit. But the deficit is a problem made in the good old USA; it is not a Chinese problem or the result of Chinese anything. If we issue fewer IOUs, then those dollars held by China will either come back as direct investment in our economy or in buying more of the stuff we produce.

Trump's solution, rather than to make hard choices in reducing the deficit, is to increase the deficit by cutting taxes on the wealthy (giving the Chinese more U.S. bonds to buy with their dollars rather than American products) and to institute a massive tariff on Chinese goods. Of course, this would create a trade war and lead to retaliatory tariffs on American export goods, where a recent economic model forecasted 640,000 job losses under this scenario in California alone. Was your job one of the 6.3 million added during the great recession recovery during the Obama administration? Well, because you are a new hire, you'll be one of the first laid off as a casualty of Trump's trade war.

Donald Trump's moral depravity should not distract voters from his less outrageous characteristics that make him unfit for the presidency. You are unlikely to be groped by Donald Trump if he is elected president. But he may cost you your job.