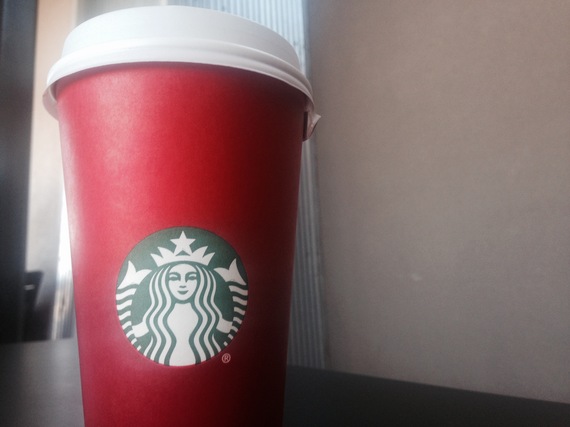 I signed onto Facebook this morning and, to my shock, the trending subject was that Starbucks has decided to have plain red holiday cups, instead of their more traditional Christmas-themed and decorated cups. People are outraged. Christians are horrified. World War III is starting and it's Christians versus first world coffee cups.

Which one is it?

As Christians in America, most of us feel that the movement for political correctness is a huge persecution to us, similar to Stephen getting stoned in the Bible. We fight through tears and prayer as people all around start to say "Happy Holidays" instead of "Merry Christmas," and incorporate things like gay couples in bank commercials.

News flash: This is not persecution.

Starbucks is a business. In a fallen world. A world that we live in and that Jesus lived in. So what do you expect? For Starbucks to honor your unpopular Christianity? Is that really why you signed up to be a Christian? So that everyone will honor you and make sure not to offend you?

Do you really think Jesus would become outraged at a business deciding not to put His birthday celebrations on their cup?

"I love everyone, because I'm Jesus, but see I don't really love you, because you're trying too hard to be politically correct and it is quite offensive to me and I feel brutally persecuted."

Get over it people. It's not persecution. It never was. Stop looking for ways to be offended.

Starbucks is allowed to do whatever the heck they want to. It doesn't make you Satan to purchase coffee from a place that doesn't celebrate Christmas, if that's even the point they are trying to make. It makes you a person who lives in a fallen world that does not feel it's a priority to honor your Christianity.

How about we decide to love the crap out of the Starbucks employee? How about we, as Christians, have a different response and instead think, "Wow, Starbucks needs Jesus. Let's love them till they know what Jesus' love feels like instead of boycotting them and demanding their respect."

So that's my thoughts on this apparent problem. Starbucks has not lost my vote and I will continue to purchase their evil red cups.