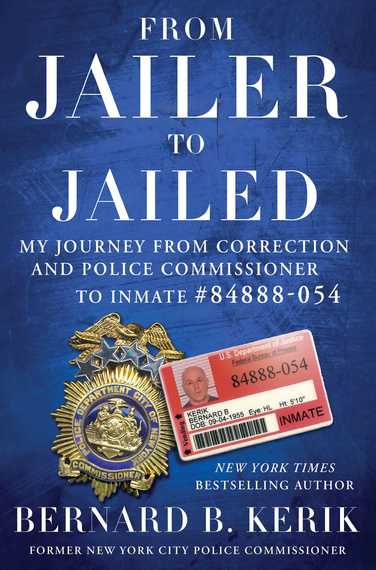 On November 6, 2009 Bernard Kerik agreed to plead guilty to failing to list either his daughter's nanny or his home renovations on his tax filings, for failing to disclose on his mortgage application that he had borrowed money from a friend to make the down payment on an apartment, and for failing to inform White House officials of these issues when he was being vetted for the Homeland Security position. He was sentenced to four years in federal prison.

The reclamation and public redemption of Bernard Kerik has just begun with his new book. He recounts in clearly written and eminently readable prose -- liberally laced with expletives -- how he was beaten by the very system in which he had played such an integral part. As a former Commissioner of both the New York City Department of Correction and the New York City Police Department, his public excoriation combined with the draconian sentence he received for relatively minor transgressions make him the perfect person to articulate the insanities of the federal criminal justice system.

Even though I am a lifelong criminal defense attorney, I was shocked by the prosecution, nay, persecution of Bernard Kerik. It is uncontroverted that as Commissioner, he completely reformed Rikers Island, one of the world's largest and most violent penal colonies, His stewardship of the NYPD during the aftermath of the attacks on America on September 11, 2001 brought him international acclaim and ultimately nomination to be Director of Homeland Security.

As the author readily admits, he is far from an angel. He failed to pay taxes on his nanny, and apartment renovations to the tune of about $220,000 and baldly lied in his application to become Director of Homeland Security under President George W. Bush. He served three years and eleven days -- some of it in solitary confinement -- merely because he is a "public figure" and the jail wanted to avoid trouble with keeping him in general population during several months of his incarceration.

Presiding Judge Stephen Robinson -- an appointee by Democrat power player Senator Chuck Schumer -- turned his courtroom into a comedy club as can be seen on the certified court record transcripts. Far worse than his judicial temperament or lack thereof, was his sentencing of Bernie to fifteen months more than even the relentlessly over zealous prosecutors requested pursuant to the federal sentencing guidelines.

Bernie is paradigmatic of a General who lost his army due to civilian blunders. Although his haters may deny this, it is his and many people's opinion that he was selectively prosecuted as part of a clear political agenda to excoriate Mayor Rudy Guiliani and the Mayor's perceived henchman Commissioner Bernie Kerik.

Upon being released from prison to an awaiting family and two young teenaged daughters and an adult police officer son, he is actively devoting the third act of his life to reforming the criminal justice system in America. He is as serious as cancer in his battle for prison reform. Say what you will about Bernard Kerik, but it is uncontroverted that every job he takes, he succeeds thereon. We are fervently hoping that he succeeds in helping to mend the apparently intractably broken justice and correctional systems.

A reading of this heart-wrenching memoir leaves little doubt that Bernie is not bragging when he avers that as "the old saying goes, A conservative is a liberal who's been mugged, and a liberal is a conservative who's been indicted. There's truth in this. But the best insight comes from being able to see things from both perspectives. Fortunately and unfortunately, no one else in our country's history has both had the experience and success in criminal justice and jail and prison management and also spent years in federal prison, as I have. I aim to use my insight to spur reform."

Not only should you read this book if you are interested in Bernard Kerik, you must read the book if you care about reforming the federal wasteland known as the United States Bureau of Prisons.

It is our fervent hope that the book will add greatly to the burgeoning movement for sentence and prison reform. Human beings should not be caged unless they hurt someone. Our great nation incarcerates more men and women per capita than any other nation on earth.

This insanity in incarcerating non-violent offenders for long periods of time must stop. From Jailer to Jailed is not only a riveting read but a unique and insightful rallying cry to forestall what the author dubs "the erosion of the very fabric of our society."