"We welcome the end of the union of blood and tears," says a small banner hanging between two lampposts. We are not in Southern Sudan, where the separation party is taking place, but right across the street from the National Assembly in Khartoum. 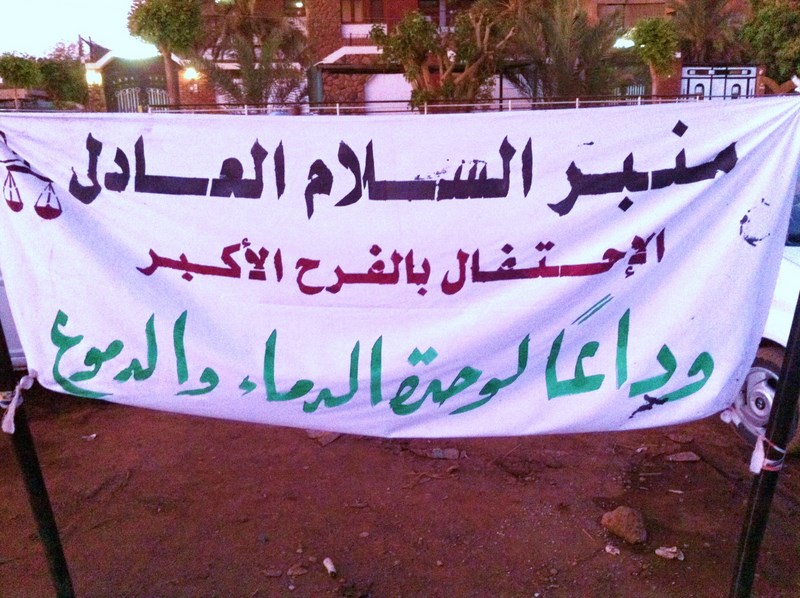 As all eyes turn to Juba and its jubilant euphoria as the Southern Sudanese have taken part in a weeklong vote for their self determination, the mood in Khartoum is significantly different, more subtle.

As results favourable to separation start to trickle in weeks before the final results are announced, the mood, overall, is that of a terminal patient who just received bad lab results -- nothing unexpected, but with a twinge of disappointment, as if waiting for a miracle they knew would never come.

Practically, the loss of the oil revenue is one thing, which appeared in a few of my discussions here in the past week, especially when juxtaposed with price increases in a few staple goods and gas earlier this month. But it's a sincere feeling of loss, of amputation, that seems to permeate a resigned Khartoum these days.

But it would be foolish to assume this is everyone's opinion in the Northern region.

"Let them go. We don't want them", says Mohammad, a retired police officer. "Just the other day, did you see how they welcomed President Bashir? He's the president of the entire nation, and they welcomed him like a foreign dignitary."

That was an understatement -- while officially given what amounted to a clumsy state visit welcome, Bashir was greeted in Juba on January 4th by flags with the word 'Secession', alongside an open hand -- the symbol of secession on the referendum ballots, but also a symbolic wave goodbye.

Sudan's national independence from the British, in 1956, is celebrated every January first. The few posters and banners remaining in Khartoum from the commemoration earlier this month, hailing the "Glorious Independence" make for an interesting, if not uncomfortable, juxtaposition to the jubilant billboards and countdown clocks hailing Southern independence from the nation -- but one can wonder if not, too, some in the North aren't seeing this referendum as a chance for "Northern Sudan" to redefine itself.

A fringe but vocal group, 'the Forum for Just Peace', is rejoicing at the prospect of separation -- and is the owner of the banner mentioned at the beginning of this article.

The group found a mouthpiece in incendiary daily newspaper Intibaha, whose call for separation stems from a desire for Sudan to redefine its identity, underlined with a sometimes not-so-subtle air of superiority.

"I was actually in favour of separation. The Southerners have been nothing but a burden to the North since they started moving here," says Tamer, a labourer. The "burden" theme is a fairly recurrent one in Intibaha, actually, and plays upon tensions in poorer areas, where some find an explanation for the absence of economic opportunities in the arrival of hundreds of thousands of Southerners in the North, displaced by the war or simply searching for better economic and educational conditions.

Another banner by the same extremist group reads "towards the end of our identity crisis". True, without its ten southern States, Sudan may find itself to be a relatively more homogenous country religiously, but it will remain a highly tribally and ethnically diverse country. Sudan is far more complex than a simple Arab North/African South.

Fadl from Darfur finds the thought of an "Arab Sudan" simply laughable. "Even if you don't count the Southerners, the North is still not Arab. Arabic-speaking, perhaps, but surely not Arab. Darfuris? Not Arabs. The Beja in the East, the Nubians, the Kordofanis". He laughs. "Actually, when you think of it, we're so mixed -- no one in this country is an Arab. It's all African".

In a time when the political discussion and media debate focuses on the oil resources and the future relations of the two states, the morphing cultural identity of the Sudan that will probably bear the first hit. With the massive exodus of Southern Sudanese leaving the North, the face of Khartoum will unavoidably never be the same again. And many are greatly saddened.

"Many of the village residents are leaving. It's... different now that they're gone," says Ibrahim, a car reseller in a village on the outskirts of Omdurman. "I don't wish they'd leave. I am deeply pro-unity, and I really think it's the politicians who want separation, not the peoples. But if they chose to go, I'll respect that," he adds.

His colleague Abdel Rahman joins the conversation. "You know, there are many families that are mixed, northern and southern. I say that any differences that a family can get through, so can we as a country."

The Sudanese government has also been considering the cultural and political outlines of the country post-referendum, and they don't look very promising. A speech in December 2010 from President Omar El Bashir told supporters that the government "will change the constitution and at that time there will be no time to speak of diversity of culture and ethnicity", adding that Sharia -- one of the main points of disagreement with the South -- will be more closely followed, a position he reiterated on January 14th in another rally east of Khartoum, as he added that "there will be no secular or civil state in Sudan". His statements promptly condemned by the Sudanese opposition figures at home and abroad -- as well as large segments of the Sudanese population, fearful that the few liberties they had carved for themselves would be squashed.

It is no secret that President Bashir hopes that letting the South go will be met by the US relaxing pressure on Khartoum -- from crippling economic sanctions that have left Sudan outside of the international financial system (it is impossible to make international transfers or to use an international credit card in Sudan, for instance) as the dropping the International Criminal Court charges against him -- and possibly giving him more leeway in applying the policies of his choice.

How Sudan will reconfigure itself after the loss of the Southern states remains unknown. But even if they were not invited to vote last week, the Northern Sudanese, too, face the challenge of defining their country's identity. Choosing the status quo is in itself a choice; but the challenge is too great, and so are the opportunities.

It is unlikely Bashir will find his hopes met by the United States. Nevertheless, smothering the country in sanctions can only be counterproductive, and if the international community's intentions are to assist the people of Sudan -- all of it -- then it should assist its economic, political and social growth, not corner it and leave it to the hands of an authoritarian regime.