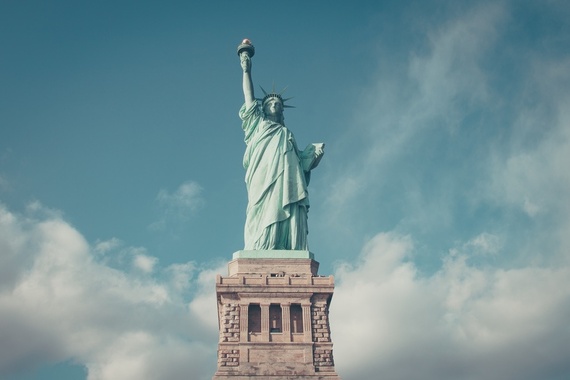 I want to whack certain people with a Bible verse. When ostentatiously "Christian" politicians malign Muslims or play into racist fears of Syrian or Latino refugees, I want to bash them with the biblical teachings they are ignoring.

But scripture is not a munitions dump. It's wrong to weaponize a Bible verse. We can't confront Christian fundamentalists by abusing scripture exactly as they do--no matter how tempting that is at times.

Furthermore, it's wrong to make policy arguments by citing texts that are sacred only to some of us. Christian humanists who want to argue the issue must speak in a public way on the public square to all of our fellow citizens.

Here's how to do that.

The first step is simple logic. The Preamble to our Constitution proclaims that all people everywhere have "inalienable" rights to physical safety and essential freedoms--rights that cannot be lost, nor given away, nor ignored by the powerful when it's convenient to do so. Refugees have these rights too, whether they are fleeing ISIS or drug lords in Latin America. How compassionately we respond is the measure of our own commitment to human rights. And a commitment to human rights is the conceptual foundation of democracy as a political system. Do we believe in human rights or not? That's the real question here.

Our commitment to human rights depends not upon the Preamble to the Constitution but upon the moral imagination. That is, are we capable of recognizing a relationship to people who are desperately seeking our help and our protection? It seems to me that there are two different ways to explain and defend this imaginative recognition.

The first option is a metaphysical claim that such relationship is undeniable. Global religions and secular moral traditions alike affirm that all human beings must be treated humanely. But secular and religious traditions support that claim in different theoretical ways. I contend that these differences should not obscure pragmatic consensus on the issue at hand.

Global religious traditions argue metaphorically that there exists an indelible bond uniting all people everywhere. These metaphors derive from the dense symbolism and complex narrative traditions of sacred texts that are thousands of years old. Jews, Christians, and Muslims proclaim that "the image of God" dwells in everyone; on this basis, all of humanity counts as "children of God." "Buddha-nature" in everyone, Buddhists say. Hindus--theological ancestors of Buddhism--insist that we are one with everything and thus with everyone. Our sense of separate, individual existence is an illusion that we must overcome. And so forth. Each tradition in its own poetic way insists that our moral obligation to the well-being of others reflects an indelible and pre-existing relationship uniting us.

There are equally vigorous secular arguments defining the same moral obligation. In the 1700s, Kant argued that it's logically self-evident that we should behave as we wish others would behave. Philosophers after Kant have offered myriad arguments endeavoring in different ways to ground moral obligation to others in rigorous logic rather than ancient narratives. Animal ethnologists like Frans de Waal attribute our innate pro-sociality to our complex brains, thus opening out an array of scientific and social-scientific arguments that concern for others is hard-wired into us.

Bottom line: you can derive our obligation to the well-being of others philosophically, scientifically, or religiously, as you choose. But it is both irrational and immoral to deny this obligation.

There is a second way to argue this point. It's a challenge that's direct, vivid, and immediate. Do we have the moral imagination that diversity demands? Can we recognize ourselves in the faces of those who are culturally different? What if they don't look like us? What if they don't speak our language or dress as we dress? What if the fragrance of the food they are cooking for dinner is unfamiliar as it seeps into the hallway? Do such differences make them a threat?

Xenophobes on the far Right are deeply threatened by cultural differences. They yearn for a Eurocentric racism and a theocratic tyranny in which Christians in a very limited, theologically radical, puritanical tradition dictate policy across the board. For decades now they have been collaborating with televangelists and other media figures to co-opt the symbolic capital of Christianity. Powered by the best PR talent money can buy, they have redefined "Christianity" as a brand. Christian humanists across the spectrum of denominations are now fighting back. We've had it. We want our religion back. We want our God back.

Religious humanists and secular humanists alike possess the moral imagination necessary to welcome diversity as a source of flexible strength, economic innovation, and cultural vitality. We have dramatically different reasons for advocating this inclusivity, but that's okay. Our conceptual differences must not blind us to the bottom line that we share: we do not condemn the dissimilar as a disaster waiting to happen.

What about the rest of us? If secular and religious humanists can recognize how much we have in common with one another, perhaps we can make a difference in public debates about refugee policy. We can make that difference by insisting, from multiple angles all at once, that America is obligated to care for those who are so desperately hoping that Americans mean what we so proudly say about the land of the free and the home of the brave.

If we lack that moral imagination--and the courage it requires--then the West has already been defeated by ISIS and its ilk. Our moral ideals and conceptual foundations have been challenged, and in that dark night we failed to defend democracy.