BRUSSELS -- European leaders may differ about how to respond to the asylum-seekers and migrants surging their way, but they seem to agree they face a crisis of enormous proportions. Germany's Angela Merkel has called it "the biggest challenge I have seen in European affairs in my time as chancellor." Italian Foreign Minister Paolo Gentiloni has warned that the migrant crisis could pose a major threat to the "soul" of Europe. But before we get carried away by such apocalyptic rhetoric, we should recognize that if there is a crisis, it is one of politics, not capacity.

There is no shortage of drama in thousands of desperate people risking life and limb to reach Europe by crossing the Mediterranean in rickety boats or enduring the hazards of land journeys through the Balkans. The available numbers suggest that most of these people are refugees from deadly conflict in Syria, Afghanistan, Iraq and Somalia. Eritreans -- another large group -- fled a brutally repressive government. The largest group -- the Syrians -- fled the dreadful combination of their government's indiscriminate attacks, including by barrel bombs and suffocating sieges, and atrocities by ISIS and other extremist groups. Only a minority of migrants arriving in Europe, these numbers suggest, were motivated solely by economic betterment.

This "wave of people" is more like a trickle when considered against the pool that must absorb it. The European Union's population is roughly 500 million. The latest estimate of the numbers of people using irregular means to enter Europe this year via the Mediterranean or the Balkans is approximately 340,000. In other words, the influx this year is only 0.068 percent of the EU's population. Considering the EU's wealth and advanced economy, it is hard to argue that Europe lacks the means to absorb these newcomers.

This 'wave of people' is more like a trickle when considered against the pool that must absorb it.... The influx this year is only 0.068 percent of the EU's population.

To put this in perspective, the U.S., with a population of 320 million, has some 11 million undocumented immigrants. They make up about 3.5 percent of the U.S. population. The EU, by contrast, had between 1.9 and 3.8 million undocumented immigrants in 2008 (the latest available figures), or less than one percent of its population, according to a study sponsored by the European Commission. Put another way, nearly 13 percent of the U.S. population (some 41 million residents) are foreign-born -- twice the proportion of non-EU foreign-born people living in Europe.

The U.S. government is hardly exemplary in its treatment of asylum-seekers, and the country has had its share of Donald Trumps who float wild ideas about expelling America's 11 million undocumented immigrants, but polls show nearly three quarters of Americans think that undocumented immigrants who reside in the U.S. should be given a way to stay legally. Indeed, the U.S. has arguably built its economy around these migrants doing work that most Americans won't.

So why the European panic? As in the U.S., an influx of foreigners provides plenty of material for demagogues. Some contend the new arrivals will steal jobs or lower wages. With rapidly diminishing unemployment in the U.S., that doesn't seem to have been true, but European unemployment remains stubbornly high. Yet many European countries also face a worsening demographic problem, with too few young workers increasingly asked to support too many pensioners. An influx of people with the proven perseverance and wit to escape war and repression back home and navigate the deadly hazards along the route to Europe would seem to provide an injection of energy and drive that Europe arguably needs. 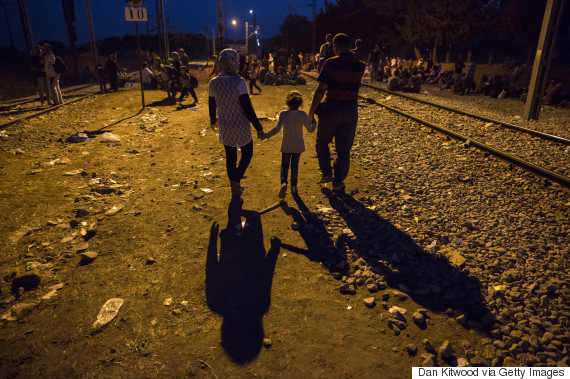 A family walks along the train tracks at dusk at the Greek Macedonian border on September 2, 2015 in Idomeni Greece.

There are concerns about terrorism. Many of the refugees are fleeing the likes of ISIS in Syria or al-Shabab in Somalia, but no one can preclude the possibility that terrorists have secreted themselves in the flow of humanity. Yet terrorist groups have already shown themselves quite capable of sending agents to Europe -- or recruiting them there -- through more conventional means. Just as no refugee would brave crossing the Mediterranean or negotiating the land route through the Balkans if easier options were available, so these routes would hardly seem to be major avenues for well-financed terrorist groups. There is no evidence that any has used it.

The biggest concern among the hawkers of crisis seems to be fears about culture. The U.S. has many more undocumented immigrants than the EU and has always been a nation of immigrants. America's vitality is in large part due to the energy and ideas that waves of immigrants have brought to its shores. While anti-immigrant policies occasionally flare up in the U.S. -- including Chinese exclusion in the 1880s, Japanese-American internment in the 1940s, Haitian interdiction in the 1990s and detention of mothers and small children fleeing harm in Central America today -- many Americans recognize that their life is enriched by diversity. But most European countries do not think of themselves as immigrant nations. Many Europeans fear that an influx of foreigners will undermine their comfortable cultures. Research suggests this concern is a major factor in support for populist extremist parties in many EU countries. That fear is accentuated in largely Christian Europe by the Muslim religion of most of the new arrivals. Some governments -- Poland, Bulgaria, Slovakia -- have expressed a strong preference for only Christian refugees.

The U.S. has many more undocumented immigrants than the EU. America's vitality is in large part due to the energy and ideas that immigrants have brought to its shores.

This disquiet has been building for decades as Europe's population has slowly changed. Predictably, the UKIP party in Britain and politicians such as Marine Le Pen in France, Geert Wilders in the Netherlands, Matteo Salvini of Italy, Milos Zeman in the Czech Republic are now using the refugee surge to accentuate these fears.

This is a political challenge, requiring political leadership in response -- not a question of capacity to absorb the recent immigrants. Some politicians have risen to the occasion. Merkel, French Foreign Minister Laurent Fabius and European Commission President Jean-Claude Juncker, among others, have spoken out against the demagogues and affirmed the European values that they jeopardize. Yet there is more to be said, and more leaders who need to say it.

Europeans leaders should publicly recall how others responded generously during World War II, when Europeans were the ones facing persecution and even becoming refugees. After the war, European nations embraced international law requiring them to welcome any asylum-seekers who could demonstrate they fled persecution. True to that principle, Germany and Sweden have already said they would accept all Syrian refugees who arrive within their borders and not send them back to the first EU country they entered under the bloc's problematic "Dublin" asylum rules. Other European nations should follow suit, and the EU should recognize a larger list of refugee-producing countries and revise the Dublin rules, which can trap asylum-seekers in EU countries that lack capacity to protect them and compel asylum-seekers to pay smugglers to escape those countries.

Europeans leaders should publicly recall how others responded generously during World War II, when Europeans were the ones facing persecution and even becoming refugees.

As for those not yet in Europe, it is unconscionable to use the risk of drowning at sea or mistreatment by a smuggler as a mechanism to deter further asylum-seekers. Not providing safe and legal routes empowers illegal smugglers who are making money as children drown fleeing conflict. Asylum-seekers who arrive in Greece -- an EU member -- should be given organized transportation to northern parts of the EU that are more capable of processing their claims under humane conditions rather than be forced to endure the risks of smuggling networks just to cross the Balkans.

More needs to be done to address the causes of refugee flows at the source. European and other leaders need to exert more pressure to stop the Syrian military's barrel bombing of civilians. Because barrel bombs are used to target civilians throughout opposition-held territory, they render ineffective the usual survival strategy of moving away from the front lines and thus encourage more Syrians to flee the country altogether. These leaders need to do more for Syria's neighbors, such as Lebanon, whose population is now a whopping 20 percent Syrian refugees -- vastly greater than in any European country.

Political leaders should not let the demagogues change the subject by fear mongering about asylum-seekers and migrants. Those moving toward Europe, though numerous, are manageable. The real question confronting Europe's political leadership is what Europe stands for. What are the values that will guide Europe in a world whose people are not standing still? The more European leaders who answer this question by reaffirming European values -- such as those enshrined in the treaty protecting refugees, the safer European culture will be, even in this period of migration and turmoil. 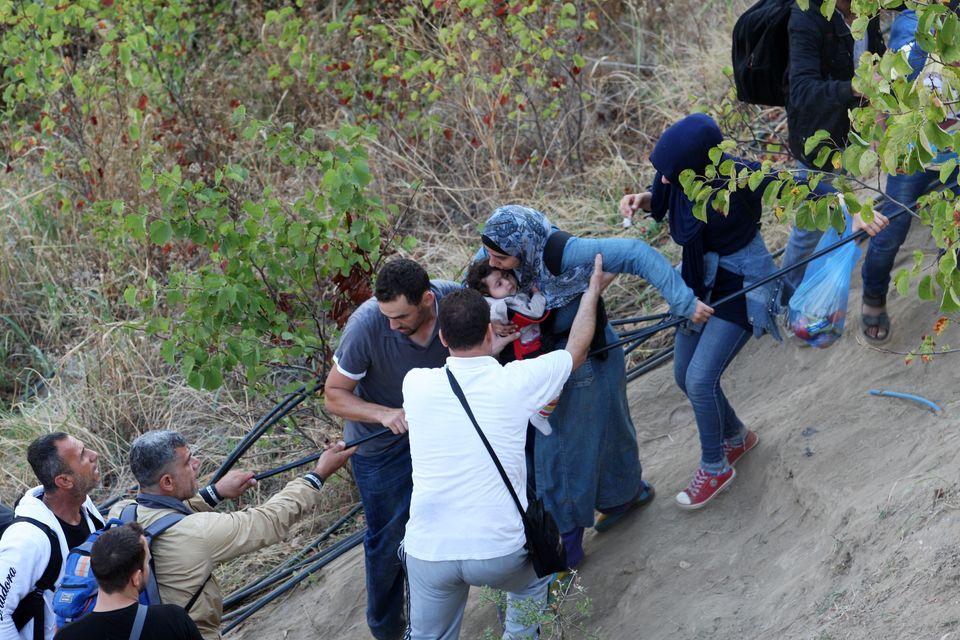