We're back to the daily grind at SCDP, and I'm grateful that the writers decided to put the characters back in the office without the holiday sentimentality. Now we can find the significance within the mundane.

This week focuses on Pete and Peggy's developing lives and diverging trajectories. I enjoy when an episode story focuses on Peggy as she has the most complex storylines -- the Catholic girl who had a baby out of wedlock but still has the gumption to work til the wee hours to break through the patriarchal ceiling. In the elevator, she meets Joyce, an editor at Life Magazine, who's carrying a folder full of photos of nude women. Across the front of this folder is a big red "REJECTED" stamp. Hello symbolism.

Peggy enters a world where she doesn't have to fake virginity to win a man's attention. All that's needed is an open mind and, lo and behold, that attracts Abe. When the cops break up the party, he leads her through a dark labyrinthine hallway where they find a hiding spot... and a kiss. 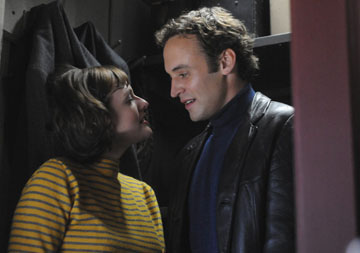 As I watch the scene where Peggy steps out of her day job and into the beatnik nightlife, I wonder what it must have been like to experience a revolutionary culture in New York City. Now marked by an ever-inflating cost of living (Metrocards about to increase again!) and an increasingly overworked population, it seems impossible that this city could again be so integral and receptive to cultural change. Young, revolutionary types in search of affordable space would be spread across the boroughs instead of congregating in the downtown area... imagine the energetic synthesis and impassioned conflict of so many idealists converging into one locale! A world where people leave work to discuss art and literature (and not work), where they're unafraid to state a unique opinion, where individuality is esteemed over fitting in with the group.

Moving on to Pete, whose changing status at home grants him success in the office. His impending fatherhood places him on the same plateau from which his father-in-law had so often sneered upon him. Pete tells the man that his Clearasil account is small potatoes and conflict of interest to the more profitable Ponds Cold Cream, and then backs him into a corner -- it's $6 million worth of business or none at all. I like that he's no longer trying to whine his way to the top, but instead using his brain for it.

Meanwhile, back at SCDP, young and single secretaries are corralled together as the sycophantic Dr. Faye leads a focus group for Ponds Cold Cream. But this quickly spirals into a group therapy weep fest, with women lamenting their rejections from men, Allison included. Eventually, Allison becomes so overwhelmed from Don's brushoff that she flees the circle. When another girl inquires as to how she's doing, Faye asks 'Who?' Dressed all in blue, she coldly directs this emotional tailspin, indifferent to the suffering she's causing in the name of consumerism. This woman is a sociopath. 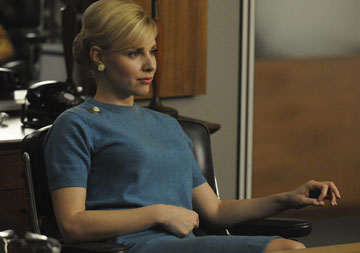 Alas, the episode lags a bit in this scene, and it's a good chunk of time spent on a theme already explored in Episode 2 -- do women run their lives in the quest for matrimony? However, it does show that Don is more progressive than Faye, who concludes from the focus group that women just want to find husbands. "Hello 1925," Don responds and then rejects her opinion.

Don's still stuck in his woe-is-me whirlpool, unable to bring himself to type a professional letter of recommendation for his humped and dumped secretary. "Type up whatever you want, and I'll sign it," he says, which causes her to throw a paperweight and shatter framed advertisements. Last week I nearly threw my Amstel Light at the TV when he said that he never revealed his true identity to Betty because he knew she'd leave him after that. Right, it had nothing to do with the lying and cheating that preceded it. Granted, Betty's got her own set of unlikable issues, but Don was just a crap husband. He begins a two-sentence apologetic letter to Allison, but cannot finish the thought: "Right now my life is very..." Part of me wants him to discover accountability and end the shenanigans... but that would strip the show of its most enigmatic and complex character.

Back to Peggy and Pete. When she learns of Pete's impending (legitimate) fatherhood, memories of carrying and giving up his lovechild resurface, and she's unable to sign the card. When she walks into his office to congratulate him, the moment is weighted with memories of their past and she retreats to her office to bang her head on her desk.

This leads to one of the more poignant scenes of the show -- Peggy joins her new beatnik friends in the lobby while Pete stays behind with the SCDP partners to relish in his newly captured $6 million account. As they embark on their opposite trajectories, the camera lingers on their knowing glances. Here is where we find emotional truth in this installment. (We have John Slattery to thank for that one -- he directed this episode.)

Peggy discovers a world divorced from her pragmatism. Now that she's realizing that people write for reasons other than getting paid, perhaps she'll channel her workaholic ethic into creative endeavors. She will be the one to embrace the 60s counter culture as she remains unattached to man or family. Unlike the secretaries living their lives for a man's approval, Peggy steps out and finds herself... and her man.