Among Nebraska's best farm exports may be one of the country's most important agriculture officials, California's Secretary of Food and Agriculture Karen Ross. Raised on a Nebraska farm, Ross knows her way around fields and barns, but has spent much of her adult life focused on farm policy, including stints working for a US Senator and the current US Secretary of Agriculture before accepting her current post.

With water such an essential part of every farmer's life and well-being, and with water wars being waged in drought-ravaged California, calm, even-handed Ross is in a perfect place to ensure that farmers get what they need today while water resources are marshalled and preserved for the future.

I first met Ross at an all-day seminar earlier this year hosted by former Secretary of State George Shultz at the Hoover Institution on Stanford University's campus. The seminar was focused on Israeli solutions to the California water crisis. Ross and I were both presenters.

More recently, I invited her to be a guest on my Let There Be Water Podcast. She was a delightful interview, with our conversation ranging over California's agriculture, her philosophy on water, the challenged state of her adoptive state's aquifers, and the unfortunate demonization of farmers, in general, and almond growers, in particular. 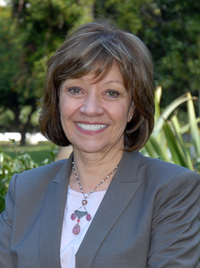 California not only produces $54 billion in agricultural products, but those products also include specialty crops of the kind best grown in California, like wine and table grapes, tree nuts, leafy greens - and even about 90% of the tomatoes processed in the US for the tomato sauce found on pizzas.

With water supplies pinched, environmentalists, city dwellers and farmers have gotten into a pushing match. But Ross points out that "it takes a lot of water to grow everything that we eat" and notes that nearly 80% of the water used in California is used for agriculture.

"Farmers grow food for people," Ross says in the podcast. "The ultimate user of all of that water is the person who eats the food grown by the farmer. We are all in this together."

One of the stakeholders of interest to Ross is generations not yet born. Ross looks at the over-taxing of aquifers and notes that the status quo can't endure for long. Because of the drought and because of restrictions on surface water preserved for the environment, farmers have been pushed to pump ever deeper into aquifers, with 60% of the water that farmers now using coming from groundwater supplies.

Clearly, such over-use of aquifers isn't sustainable. "If we don't do something today," Ross says, "every year we continue to pump so much, we are putting ourselves into an ever greater deficit [of groundwater], and that isn't a wise thing to do for the generations that will follow us."

Ross and state officials have some hard decisions to make. If the preservation of the delta smelt, an endangered species, continues to keep large amounts of river water off limits to farmers, if over-pumping of aquifers isn't sustainable, and if we want California agriculture to continue to grow, the only solution is in lots of new technology. This includes more drip irrigation to more use of treated wastewater to the development of desalination plants dotting the state. Is there the appetite for an investment in all of that?

To hear Karen Ross discuss all of this, listen to her on the Let There Be Water Podcast. Click here to listen.

Businessman, Activist and Writer. Author of the New York Times bestseller Let There Be Water: Israel's Solution For A Water-Starved World