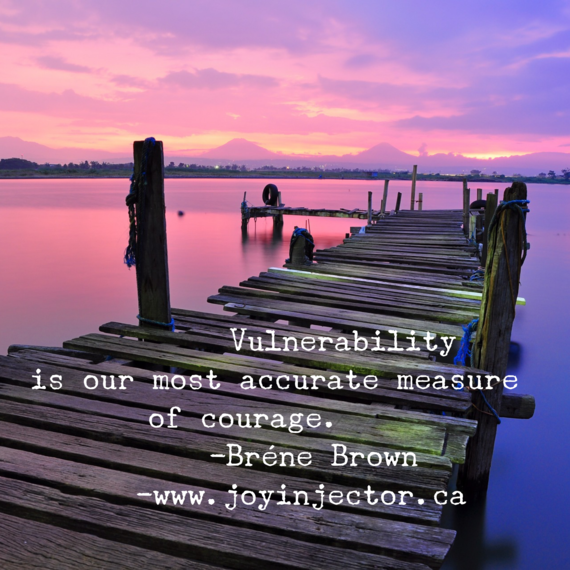 Courage, Fear and Vulnerability walk into a bar.

They sit down and order a drink, Fear orders two doubles.

They start to discuss an upcoming event and they talk about what's going on for each of them.

Vulnerability says "I don't like the looks of this, we're going to be exposed, people will really 'see' us; feels risky."

Fear says with such eloquence, "Are you KIDDING me?! There's no freakin' way I'm doing this!"

Fear and Vulnerability are cousins -- they've grown up together, they've grown closer over the years and they whisper back and forth A LOT, especially in stressful circumstances.

Fear's the less complex of the two -- it sniffs out what it perceives to be dangerous from miles away and tries to get the group to turn back.

Fear's not dynamic, he doesn't explore. He says and sometimes screams "RUUUN!"

Vulnerability has some of Fear's DNA, they're related after all. Vulnerability knows Fear, but checks things out and sees that if one is to forge ahead, try something out, or create something, that it's risky.

Courage is aware of all that Vulnerability and Fear have noticed, but knows, "if we don't do this we risk staying small, not truly connecting or creating anything new or being innovative." The cousins gulp audibly in response.

Courage allowed pioneers to settle new places, allows artists to paint, sing and dance, people to fall in love and run races (make you nervous just thinking about those things -- that's Vulnerability and Fear dancing). For those artists, pioneers and lovers it was not for lack of the warning shouts informing them of their possible demise, it was the courage to move ahead in spite of them.

It's risking really and truly being seen, trying something out, reaching out -- whatever it might be.
It's risking flat out butt-baring nakedness, of someone seeing the truth, unhidden and that's scary, even terrifying at times.

Courage is not the lack of fear or feeling vulnerable, but it goes on to say to his "buddies," "I know you two, but let's do this anyways." GULP (Fear orders another double).

Courage doesn't wipe out fear.
True courage allows us to be vulnerable and despite of fear's Armageddon messages, to recognize it and even embrace it to say, "this feels awful, but I'm going to do this, not without you, but with you both."

When one mentions how courageous someone is, the comeback is 99.9 percent of the time, "I don't feel courageous, I feel terrified, or afraid or sad, overwhelmed..."

The truth is vulnerability is the birthplace of intimacy, true connection, creativity, and innovation.

Vulnerability allows us to create something: launch a new business, perform a song in front of a live audience, publish a blog, tell someone you love them or put a boundary in place, deal with your declining health, hold someone's hand when they're suffering... that also takes flat out, unbridled courage.

Sometimes courage is facing the cards that we've been dealt: a parent dying, a child with cancer, a car accident, recovering from an assault...

Courage might be a simple and as hard as putting one foot in front of the other, when the load seems too much to bear.

Courage is going on a first date after your marriage ended.

Courage is reaching out for help and letting others know that you're terrified at the recent health diagnosis.

Courage is applying for a new job after being recently laid off from what one you thought had security and at the same time telling your friends that this feels scary.

That's where courage and vulnerability "hook up."

Courage is not about bucking up and moving ahead without help or strong emotion, real courage isn't as simple as that.

Courage is complex and beautiful... courage is admirable and breathtaking.

You have it in you to allow yourself to be seen; to really show up in all areas of your life and to truly live brave.

What are you afraid of, right now?

What would you do if you weren't having drinks with Fear?

What would you ask for?

What boundary would you put in place?

What part of your "story" would you embrace?

What would you love to create and put into the world?

Buy Fear and Vulnerability a drink but be sure to take Courage by the hand and create a life worth living -- you've got this.

Leona deVinne
Coach, Consultant and Speaker that helps people create lives and businesses that are rich in meaning and purpose. The results are game changing. One of the greatest bi products is Joy-that's what we're all made for.