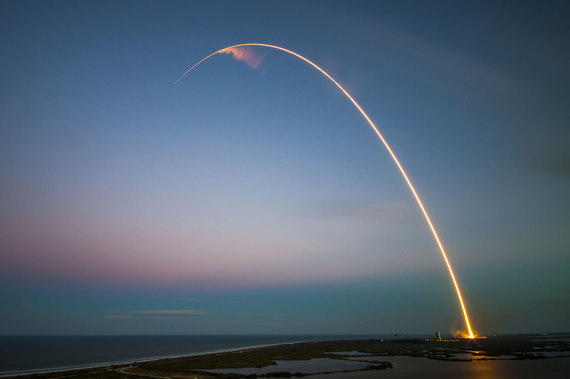 The picture froze, reviving moments later to a few frames showing a bright ball of light hurtling towards the platform. And then, the screen cut to color bars.

Did the rocket land?

Yesterday Elon Musk's Space X fired the Falcon 9 rocket on a mission to send the SES-9 telecommunications satellite into space. Catapulting the payload into orbit was the mission's main purpose but aerospace enthusiasts around the world tuned in to see if the reusable rocket could complete its experimental secondary mission: attempting to make the first landing on a drone ship in the ocean.

Musk, who is also the founder of electric car company Tesla Motors, later confirmed that the rocket crash-landed on the drone ship. This came as no surprise to Musk himself, who was saying well before the mission that he expected the landing to fail. Announcing failure before the mission even launched is an uncomfortable brand of rhetoric, one that illuminates Musk's preference of logic and probability over faith in the thousands of Space X employees working around the clock for him.

But it's this robotic determinism - which in his case literally involves shooting to the stars - that makes Musk one of the great inventors of our time. It also helps that he's deeply involved in a space race with Amazon founder Jeff Bezos, who successfully launched and landed the reusable New Shepherd rocket in January under his space exploration company, Blue Origin.

Comparing the two programs is comparing apples to oranges; the much smaller New Shepherd project is being designed to take people to the edge of space while the Falcon 9 is commercially sending satellites into orbit. But the independent successes of Blue Origin and SpaceX aren't solely attributed to the two CEOs' competitive fire. It's the result of their ability to efficiently invest their resources to transform their objectives into realities. In addition to making investments in newspapers and solar power, Bezos and Musk have mastered the art of detail-oriented allocation of human capital, a valuable asset in an aerospace industry where small errors in detail have explosive consequences.

But applying airtight calculus to management isn't always a popular human resources strategy. In August the New York Times ran a lengthy article ripping into Amazon's employee practices, profiling white-collar workers who had to sacrifice their time and relationships with co-workers and families to accommodate the data-driven and competitive corporate culture.

The controversial article spurred a defensive response from Bezos, who argued his company was nothing like the "soulless, dystopian workplace" described in the piece. But even if true, the anecdotes in the New York Times article fall in line with Bezos's view that hardship is the secret to solution.

"I think frugality drives innovation, just like other constraints do. One of the only ways to get out of a tight box is to invent your way out," Bezos said in a 2008 interview with Bloomberg.

Musk is of a similar managing style, even calling himself a "nano-manager" in the way he pushes his employees to perfect even the smallest details. This isn't a characteristic that most employees would like to see in their bosses, a sentiment shared by an anonymous Quora user online claiming to have worked at SpaceX.

"He won't hesitate to throw out six months of work because it's not pretty enough or it's not 'badass' enough. But in so doing he doesn't change the schedule," the user posted.

There have been several lawsuits filed against SpaceX, alleging that the company violated state labor laws by regularly expecting employees to work overtime without proper compensation and even denying workers breaks.

Whether or not you agree with their managerial styles, it would be hard to discredit the achievements that Bezos and Musk have reached under their guidance. And if history is any indicator, people will gloss over their controlling attitude towards employees.

That was the case for Thomas Edison, remembered as the prolific inventor of the phonograph, the incandescent light bulb and early motion picture cameras instead of a demanding manager over the chemists, engineers and other employees at his laboratory in Menlo Park, New Jersey. Much like Bezos and Musk, his employees were aware of how strenuous the working conditions were.

One worker under Edison recalled that employees "worked long night hours during the week, frequently to the limit of human endurance." Nikola Tesla, an apprentice under Edison, slaved away for months on two to three hours of sleep a night to help improve Edison's direct current generation plants. When Tesla asked to be paid after completing the job, Edison clarified that he was joking when he promised Tesla a $50,000 commission.

The relentless work ethic pushed forth by Bezos, Musk and Edison is two-pronged in nature; the stress encourages employees to struggle to innovative solutions while also testing their loyalty to their leaders' powerful visions.

"The psychological atmosphere of the place partook of the inspirational as a sort of reflex from Edison's genius," Edison's worker later explained.

It's too early to tell, but if Bezos and Musk can prove themselves to be the great creators of our generation, these undeniably demanding work environments will be validated as their own innovations, ones independent of the ingenuity that gave us online shopping, electric cars and rockets to outer space.

Brian Cheung is a freelance writer interested in socioeconomics, finance, and media analysis. He graduated from Syracuse University majoring in finance and broadcast and digital journalism. Brian's work can be seen at brian-cheung.com.