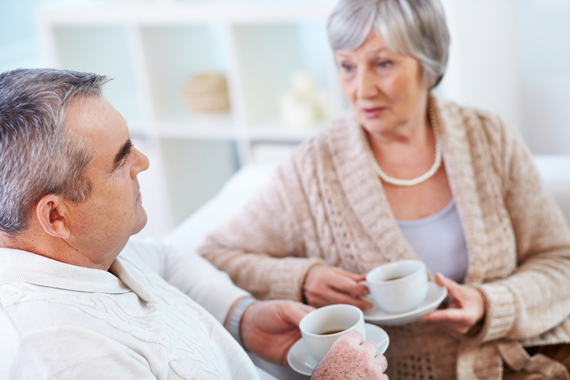 The dreaded, difficult "relationship talk." By now, we've all had them, and they're still hard to navigate. Whether they're about money, sex or family issues, these talks make problems at the office look like a walk in the park.

The problem is eating you alive and you obsess about it everywhere -- in the shower, in the car, at work. Even songs on the radio sound as if they're about you.

Just last week, my friend Eleanor had "the big talk" with the man she'd been dating for four years. She told me, "I thought I wouldn't be doing this at 61. My dream of a relationship with him is just simply over.

"When I got in the car and heard that old Carole King song, 'It's too late baby, now it's too late, though we really did try to make it,' I sobbed like a baby."

Your talk may not be about breaking up, as my friend's was. But you know in your gut when it's time for the talk. You can no longer pretend that it will disappear by itself.

Here are two pieces of good news: First, there is a technique for the talk. Second, you're not alone. You're one of millions who've faced that wrenching anxiety and who've made it to the other side intact, relieved and better able to move on.

From all my years as a specialist in sexuality, relationships and focusing on divorce, these are my seven top tips for preparing for "The Tough Talk."

1. Give your partner a heads-up that you would like to carve out time for a serious talk. The four words men hate most are We Need To Talk. If a woman says that to a guy, he dreads it, and he may balk, but the conversation needs to happen.

Just the opposite is true for most women. When a guy says that to a woman, she may be anxious, but she is likely to welcome the opportunity for discussion. Recognize that you're coming from completely different corners.

2. Create three talking points (and only three!) and memorize them. Be able to make each point in one sentence. If you say nothing else, these are the points you need to make. Now you have a skeleton outline to help you return to the issues at hand if you get sidetracked.

3. Be concise. We tend to say too much. Say it once. Let silence happen while your partner processes your points.

4. Don't be in it to win it. Be in it to discover how your partner sees it. In fact, ask, "How do you see it?" This attitude shift is critical. It's not a fight. It's a discussion.

5. Stay in the present! Do not bring up past transgressions no matter how tempting it is to zap him with old atrocities. That's hitting below the belt. Defensiveness and anger will follow, and your talk will dissolve into an argument no one can win.

6. After you've covered your three talking points, ask, "Where do we go from here?" Be prepared with your own suggestions, but listen to your partner's ideas, too. He or she may suggest alternatives that never crossed your mind.

7. If you're reduced to shouting, be confident enough to end the discussion. Suggest you both think about what happened and set a time to talk within three days when both of you have calmed down.

Following these seven rules make it fair to everyone with the added plus of controlling runaway emotions. If it doesn't go like clockwork, don't beat yourself up. You did your best.

They won't eliminate all the angst, but once you've said your truth, you'll notice a lightness where there used to be a hard knot. John Mayer said it so well in "Say What You Need To Say."

So go ahead. Be brave. Do it before you lose your mind. No more excuses. Do it now.

If you have a tough talk coming up or if you need help concerning your own personal challenges, contact me personally.

Need upbeat energy first thing in the morning? Get my morning inspirations to get you energized for the day ahead. Go here for my 30-day audio download of inspirational (and often funny) 4 minute messages to kick start your day for 30 days.