It's not over. Far from it. The economic and political establishment, which includes the Democratic National Committee (DNC), its Wall Street and corporate backers, and the major media, most of it now owned by a half dozen big corporations, have worked feverishly to turn the Democratic primary process into a coronation for Hillary Clinton.

Bottom line, they wanted to declare it over before actual voters could vote, but their carefully crafted strategy began to #FeelTheBern.

Here are 10 ways that establishment has sought to orchestrate the results, and why the race has a long ways to go.

When Sanders began his campaign, as he often recounts, he had virtually no national name recognition (compared to Clinton's universal recognition) and trailed her by 60 to 70 points in national polls.

The major media barely breathed his name, even when he began drawing crowds of 20,000 or more to summer rallies. Partly the result of the obsession with Trump, but also because the conglomerates controlling the media hardly wanted to promote such a fierce critic of Wall Street and the 1 percent. 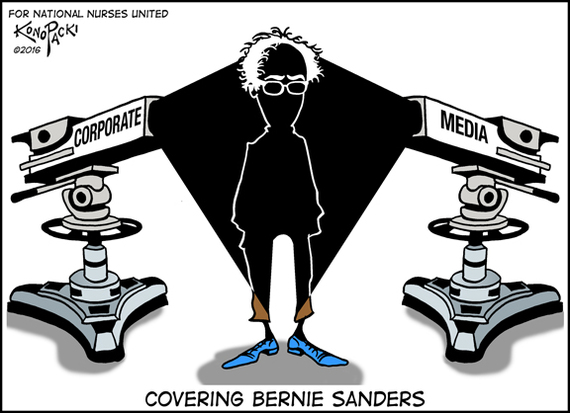 In December the nightly news networks had allotted Trump 23 times more coverage than Sanders, on ABC alone 81 minutes to Trump for the year, compared to only 20 seconds for Sanders.

Even though while Sanders was holding extensive campaign events and press availabilities for months, Clinton was mostly avoiding public events and media avails, with the media largely ignoring its rebuff. (Even today you rarely see it pointed out that Clinton continues to dodge press conferences.)

Ironically unlike the Republican National Committee, the DNC manipulated its debate schedule to have the fewest number of debates at the worst times, intended to minimize voter viewing, including setting them on holiday weekends and the Saturday night before Christmas.

The goal was to restrict voter exposure and side-by-side comparison with other candidates who offered a significant alternative to Clinton, which served to keep name recognition of Sanders and his prescription for change artificially low. Additional debates were only added much later after widespread condemnation of the DNC.

As the votes began coming in for Bernie, especially with his tie in Iowa followed by the big win in New Hampshire, Clinton surrogates were given extra time as TV analysts to downplay the results, and the media narrative shifted. 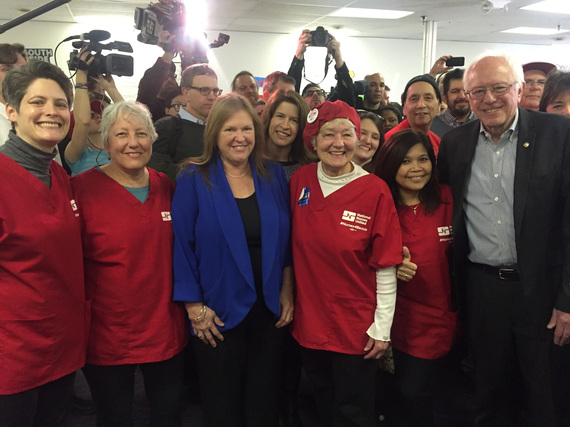 NNU members with Bernie and Jane Sanders in Iowa

The media paradigm typically is crafted inside the Washington Beltway and New York boardrooms, with other reporters compelled by their own editors or self-censorship to follow along, a practice also known as pack journalism.

A parade of big name liberal columnists, editorial writers, and TV analysts vilified Sanders' visionary program, especially Medicare for all and free college tuition, while promoting Clinton's "pragmatic" (lower your expectations) message that minimized the ongoing crisis felt by the millions left behind without health care, unemployed or stuck in low paying jobs, facing mountains of student debt, and all the other pervasive disparities Sanders described.

The next story line depicted Sanders as a narrow candidate because the majority of his support came from students, working class white voters, independents, and low to moderate income voters - largely ignoring that Clinton's own base failed to include any of those groups who would be critical to winning a general election in November. Or that Clinton continues to fail to move support among those constituencies.

After Sanders' sweeping win in New Hampshire, the DNC went into hyper drive to break his momentum, starting in the next voting state Nevada.

Concerned Sanders would win Nevada, Sen. Harry Reid, the former Senate Majority Leader and most powerful elected official in Nevada, as it later emerged, arranged a plan with owners of Las Vegas casinos, where many caucuses were being held, and other employers, to ensure Clinton would win. The Nevada caucuses were then rigged with massive voting irregularities such as casino owners orchestrating which workers would be allowed to vote and, in clear intimidation, openly monitoring how they voted.

Vote tampering also occurred in other states, most recently in Arizona where on election day, polling locations were sharply cut forcing many voters to stand in line for up to five hours in the heat, with some leaving before casting a vote.

Voter suppression laws, rampant now across the country, disproportionately disenfranchise students and young voters, a group that has voted for Sanders by margins of up to 80 percent. The laws, passed by rightwing legislatures and governors, also target African-Americans and Latinos, which will ultimately harm any Democratic nominee in November.

Desperate for attack lines against Sanders, the Clinton camp and her adherents have tried to paint him as a sexist, employing the same tactic of exaggerated small slights they used against Barack Obama in 2008 (remember "you're likeable enough"). Add in the clumsy effort of Clinton surrogates Gloria Steinem and Madeleine Albright to mock and vilify young women who vote for Sanders.

Memo to Clinton and company. Bernie Sanders is not Donald Trump. He has a near perfect voting record on such issues as women's reproductive rights and pay equity, and most of his proposals, especially Medicare for all, free college tuition, and expanding Social Security would disproportionately help women. 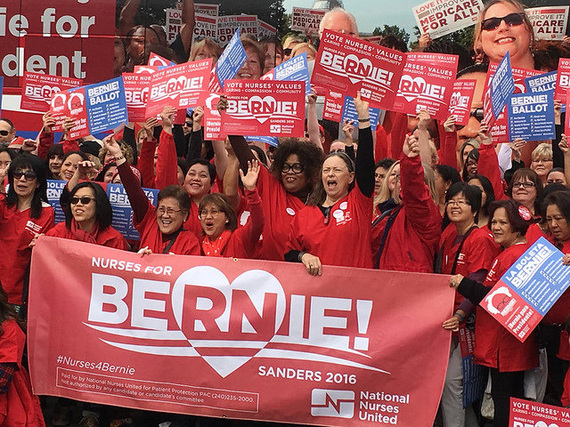 As the 90 percent female organization of nurses NNU has stated, we would love to break the glass ceiling, but this election is unprecedented in its opportunity to shatter the class ceiling.

Sanders has won the overwhelming majority of independent voters in "open" primaries or caucuses that allow them to vote.

Many Clinton surrogates have fulminated that any independent voters are allowed to participate in the Democratic Party nominating process. As if only the two major parties should be allowed to decide who can run for office while a record 43 percent of U.S. voters are now independents in a corrupted system. Winning the independents' votes is decisive in general elections, suggesting they should have a voice in determining who are the strongest candidates.

Because of the media blackout, many voters do not gain sufficient information about Sanders until shortly before election day. Early voting reflects lower name recognition for Sanders, benefiting Clinton and enabling her to win some close races.

That contributes to the meme of her "inevitability," but does not indicate she is the stronger candidate. In competitive states, Sanders has won a majority of those who voted on election day. When voters have more time to compare candidates based on sufficient information, they tend to choose Bernie.

Enormous pressure was brought to bear on the some 700 super delegates, mostly Democratic elected officials and other high-profile DNC members, to fall in line behind Clinton, facing intimidation or promises well honed by a Clinton machine that has had 25 years of practice.

An additional factor is the DNC decision to step up raking in cash from Wall Street and other corporate donors, and their implicit pledge to use those funds only for Democratic candidates who play ball by supporting Clinton.

These officials believe that the way to win elections is through big donor fundraising and shape shifting positions. The Sanders' truth telling campaign, supported by millions of small donors engaged in a movement mobilization, is foreign in their eyes and threatening to their donor base.

The overwhelming tilt of super delegates for Clinton has fueled the narrative that Sanders can't win, a line that the super delegates, who have a wider audience as members of Congress and often as supposedly neutral TV analysts, parrot relentlessly, along with the other Clinton/DNC/major media attacks.

The DNC created the undemocratic super delegate system to confer the power on the Democratic Party hierarchy to handpick their preference and blunt the ability of insurgents to win the nomination after outsiders George McGovern and Jimmy Carter shocked the party establishment by winning nominations in the 1970s.

8. Who's most electable, who is not

It's repeated over and over by her super delegates and the media - Clinton is the most electable candidate, and Democrats must rally behind her to beat Trump. The line has been so drummed into the narrative that many voters in exit polls cite it as the reason they voted for Clinton.

One problem, it's not true. Virtually every poll for months has shown Sanders faring better against Trump, Cruz, and Kasich than Clinton, often by a wide margin, even as the media has already played out the attack lines Republicans would use against Sanders.

Additionally, the media largely ignores the salient point that Clinton has nearly the highest unfavorable ratings of any leading Democrat to run for President. By contrast, Sanders, widely praised by voters as the most honest and trustworthy candidate most have ever seen, has among the lowest unfavorable ratings, despite the media shock that anyone would trust, much less vote for, a democratic socialist. 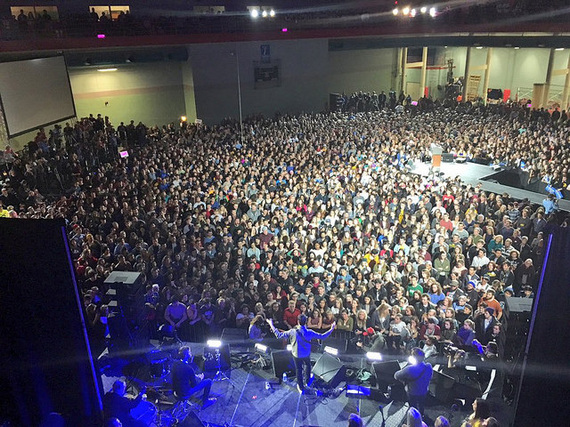 And the media consistently downplays a key Sanders point, how the enthusiasm that he generates - evident in the now 1 million who have packed his campaign rallies - that is largely absent from Clinton's campaign is critical for the nominee to win, as well as to help in down ballot races for Democrats.

The final defense for the Clinton camp and the major media, spinning out from the Eastern media centers to local news outlets, is that Clinton is too far ahead in delegates so the race is over.

To make the case even more heavy-handed, Clinton's big margin among super delegates is added to the total of delegates won in primaries and caucuses. Even though unlike pledged delegates, super delegates are not committed to their position. They can flip at will, as they did from Clinton to Obama in 2008.

Next time you hear a pundit say, Sanders needs to win 60 percent of the remaining delegates, "and that just can't happen," consider his 80 percent victories in Idaho, Utah, and Alaska, and over 70 percent in Washington and Hawaii.

In state after state, especially that are not closed to independents, where Sanders has had time to campaign so voters get to know him, his platform, consistent record and unimpeachable character, and when the voting process is allowed to move forward without open rigging, Sanders does increasingly well.

The result often is wins, as in Michigan and recent caucus states, or effective ties in votes and delegates, as in Iowa, Missouri and Illinois. Even in states where Clinton ultimately won because of voters who voted early by mail, Sanders increasingly won the majority of those who turn out on election day.

Sanders himself says the path to his nomination is challenging, but still within range. States that were the biggest hurdle, in the South where the Clinton's have a long history and Sanders was a complete unknown, are all past.

The remaining states, including the two largest, California and New York, which have a base more favorable to Sanders, can be won with lots of delegates to be awarded. National polls have already shown substantial movement toward Sanders the past two months, and his edge over Clinton in head to head matchups with the remaining Republicans continues to grow.

The challenge, of course, is not just to Clinton, but to the movement, including nurses and the activist army that has shattered all records in campaign contributions to Sanders and creates the overflow crowds at his rallies.

Enthusiasm for the Sanders campaign, the transformative program that he presents, which is really the program NNU and grassroots activists have long championed, is off the charts, and continuing to grow.

It's on to California, and what promises to be an explosive convention in Philadelphia.