One summer vacation, my husband and I were visiting historical sites on Maryland's eastern shore. Armed with a list from the Internet of historic houses, graveyards, and churches, we followed back roads and traveled by ferry to little-remembered locations of early American history. The Maryland counties between the Chesapeake Bay and the Atlantic Ocean are among the oldest settled parts of the United States. Once home to the Choptank Indians, they are marked by tiny Colonial towns and made famous by James Michener in his novel Chesapeake.

After exploring an old Episcopal church, my husband asked, "What next?"

"There's a Quaker meetinghouse not far from here," I replied. "Outside of Easton. Let's go there."

We drove up a country road toward Easton. Before we entered its historic downtown, a modest sign pointed off the road: "Third Haven Meeting House." We turned into the property, bounded by an aged brick wall, onto a rough driveway lined with even older trees. The summer sunlight fell through the foliage upon a white clapboard building with green trim, neat and simple. 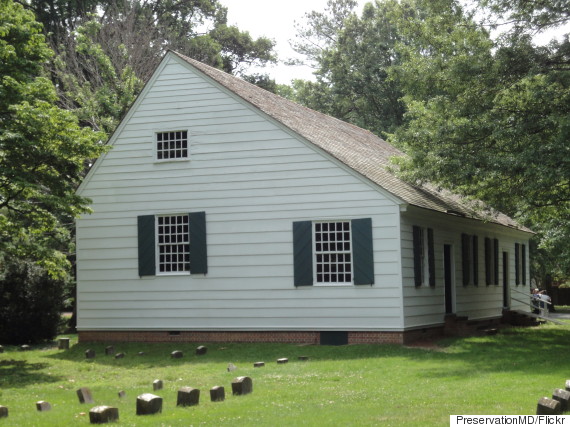 We were the only people on the property, and a sort of profound quiet engulfed us. If it had been a Catholic church, monks would have been chanting. But it was a meetinghouse for the Society of Friends, also known as the Quakers, the most radical of seventeenth-century Protestants, those who eschewed all outward ritual and religious hierarchy in favor of silence and finding the inner light within.

"It is old," I said. We parked and walked up to the front porch. "I wonder if it is open."

My husband looked through the window, not the smooth modern kind, but glass pocked with imperfections and rippled patterns. "Pretty," he said. He tried the latch.

The door swung open to reveal a cathedral of simplicity. The scent of old wood overtook me; the vision of light falling across rows of plain benches made me gasp. The building was both empty and full at the same time, inviting all seekers to come and sit and listen. Surely, if God spoke, God spoke within these walls.

We stayed for more than an hour, perhaps longer, exploring every corner of the place. Climbing stairs to the loft, sitting on the elders' bench, running our figures over the glazed windowpanes. We read the history pamphlet provided to visitors, "Old Third Haven Meeting House 1684," and learned that George Fox himself, founder of the Friends, had visited Quakers in this area about ten years before the meetinghouse had been constructed. Those who met here, initially in houses as "meetings" and then in this building, had been among the first English settlers to oppose slavery, championed complete equality in God, and contributed to making religious toleration a reality in the colony.

I did not want to leave. I wanted to stay forever, embraced by the spare holiness. I sensed a connection with the place, the strange sensation of once having been there, even though I had never even entered a Quaker meetinghouse before.

"Do you want to go?" my husband asked.

We left reluctantly, placing a donation in a small box by the door. We walked around the large churchyard, peeked in the "new" building (dating from Victorian times), and then departed.

"Do you want to go somewhere else?" he asked.

"Where could we possibility go after that?" I said. "What a remarkable place."

Three years later, I was doing genealogical research into my mother's family. I had tried many times to trace her roots on Ancestry.com, but had failed. After abandoning the project for a year, I returned to the website to look at added information, a new family tree. The line reached back in history: my mother, her father, her grandfather, his father . . . to one Andrew Orem, who was born in Scotland, came to Maryland, and married a woman named Eleanor Morris at the Third Haven Quaker Meeting in 1678.

The Easton Quakers were my ancestors. Those who began my family in the New World had left behind their familial Anglicanism or Presbyterianism to join the ranks of the Friends in Maryland, where they listened to George Fox preach on the inner light. They were the very people who formed that society, constructed that building, fell in love and formed families, listened to God within, and learned to follow Jesus's way sheltered by those clapboard walls. Hidden by layers of history, now recovered to sight. I found them.

But, of course, I already had. Three summers before in the silence of an old meetinghouse. I may never have been there before, but they had been. And I recognized it in my bones. I found my roots.

Excerpted from GROUNDED: Finding God in the World, A Spiritual Revolution by Diana Butler Bass