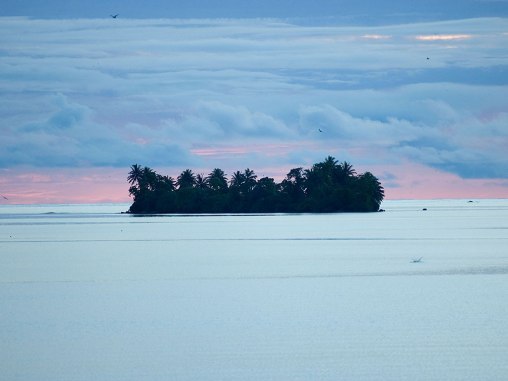 In 1787, before the Constitution was even ratified, Congress passed an act called the Northwest Ordinance, creating a new American territory stretching from Ohio all the way south to Illinois and west to Minnesota. The Northwest Territory was the first organized incorporated territory of the U.S., but it wouldn't be the last. As the nation expanded westward, Congress continued to organize new territories that would eventually become states: the Oregon Territory, the Nebraska Territory, the Oklahoma Territory, and so on. When Alaska and Hawaii gained statehood in 1959, the era of the incorporated territory ended -- except in one place. A tiny Pacific island called Palmyra Atoll has, for the past 55 years, been America's last incorporated territory.

See Also: How Not to Look Like a Tourist in Paris

Palmyra Atoll is one of the most remote places on Earth. Located about 1,000 miles south of Hawaii, it's a tiny collection of 50 islets and acres of coral reefs surrounding three beautiful lagoons. In 1798, it was discovered by an American merchant ship, the Betsy. The Betsy's captain slept so fitfully one night that he ordered the ship to heave anchor, worried that his bad dreams were a premonition. Sure enough, in the morning the Betsy was just a mile off the uncharted reefs of Palmyra. If it had continued its voyage at night, the ship would have sunk.

The island passed through a series of owners before being annexed as part of Hawaii in 1898. The Fullard-Leo family bought it in 1922, but the atoll was seized by the Department of the Navy during World War II, and the Fullard-Leos had to take their case to the Supreme Court to get the island back. Over the years they turned down offers to sell the island as a casino or a nuclear waste disposal site, but in 2005 they finally sold Palmyra Atoll to The Nature Conservancy, which now maintains a research station there studying coral reef conservation.

The territory made its biggest headlines in 1974, when an ex-convict named Buck Walker set up shop on Palmyra to grow cannabis there. Walker murdered a couple yachting from San Diego, stole their boat, and sailed it to Honolulu where he repainted it. He was arrested for yacht theft but escaped to California; years later, when some of his victims' body parts washed ashore, he was arrested and convicted for murder. The case was adapted as a best-selling Vincent Bugliosi book and a CBS mini-series starring James Brolin!

So Palmyra Atoll has had one more high-profile murder than it's ever had permanent inhabitants. (There are now barracks for as many as 20 scientists and staff working on the island.) But that's the kind of excitement you'd expect in America's last frontier, I guess. When Hawaii became a state in 1959, Palmyra Atoll was specifically excepted, and to this day it's America's lone incorporated territory. U.S. territories like Puerto Rico are legally "unincorporated," meaning that not all constitutional rights necessary apply there. By comparison, residents of Palmyra -- if there were any -- are legally part of the United States proper.