Danielle Crittenden's 1905 house in Washington, D.C. has been undergoing a major renovation for the past year (and off and on for over a decade). In this weekly summer series, Danielle records what it has been like for her and her family to live through the construction with their builders, Virginia-natives Brent and John. 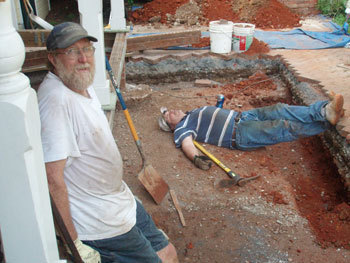 Brent and John digging the foundation for the breakfast room. John is the one lying down with the beer on his belly (a true beer belly?).

I should have seen where the relationship was going when John told me he had to leave for Cape Cod.

We'd been living together for more than a year. It had taken me many months to learn to decipher his sentences. Or rather, his half-sentences. Or, as was more often the case, a mumbled word or two followed by a muddy stream of tobacco juice aimed at the nearest container (John was not choosy about his containers: at best it was a disposable coffee cup or beer can; at worst, one of my wine glasses). I prided myself on having learned "to speak John."
I sat down upon one of his overturned paint buckets, absorbing his news. 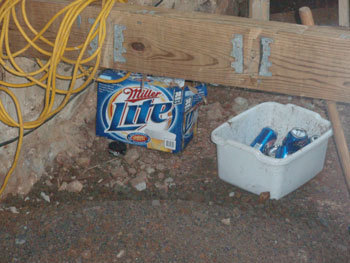 What I think fondly of as one of John's "beer installations." He prefers Bud, but he's not choosy.

He cleared his bit (the kitchen sink was nearest this time), and managed to squeeze out an explanation.

"Family place. You know. The Cape. Needs a new roof. Insurance won't'---and here followed some groupings of words I couldn't translate (like anyone who has recently learned a new language, I still found it difficult to follow a native speaker when he went too quickly); but I got the gist of them.

"So you're leaving us then."

"No. Yes. No. Not really." Again his gaze returned to his sneakers. John had warned me against tugging on his Catholic sense of guilt. I could see his conscience flapping madly now under the unruly thatch of black hair. He patted his head, as if trying to settle his mind, but the gesture only produced a little puff of drywall dust.

He opened a can of Budweiser. The familiar spprisish of the can exhaling was, I realized, something I was already going to miss.

"How are we going to get by without you?"

"I'll get things in order. You know. Before I go."

I nodded. This was some consolation.

I rose to pour myself a drink--something a little stronger than a Bud. Four o'clock was our designated cocktail hour, the time of day when we reviewed where everything stood between us. To be honest, John was not always standing at this hour but weaving slightly. To say beer was in his blood would be a quaint way of suggesting that as a Southerner, he liked to drink. In his case I think his blood was, quite literally, 99-percent beer.

"I guess there's nothing I can say. You have to go."

"We're all going to miss you."

"But we still have some time left."

I joined him with my gin in our nearly finished breakfast room; the stickers on the new windows partially obscured the early spring view of cherry blossoms in the backyard.

He nodded. We stood together thoughtfully, appreciating the room's fine joints.

And that, I realize, was the beginning of the end of my relationship with my builder, John.