Danielle Crittenden's 1905 house in Washington, D.C. has been undergoing a major renovation for the past year (and off and on for over a decade). In the final installment of this weekly HuufPo series, Danielle records what it has been like for her and her family to live through the construction with their builders, Virginia-natives Brent and John. To read previous installments, click here. 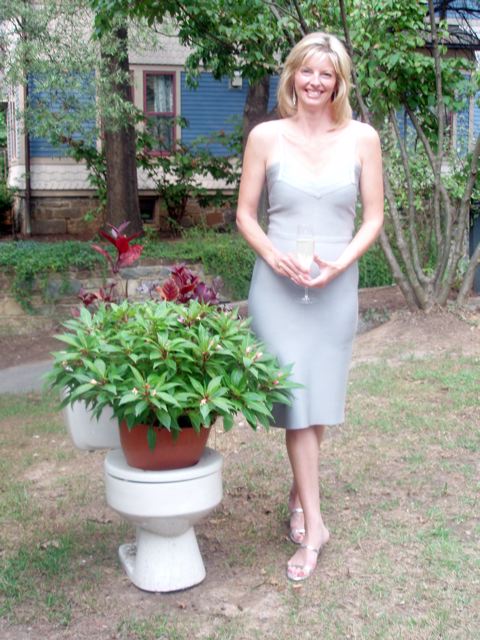 As Brent and John had hauled out the last bits of trash, I'd asked them to keep the old toilet in the front yard. A pot of flowers in the bowl, some ornamental grasses popping out of the tank--yes, I could work with this.

They shook their heads. Clearly, we'd reached a state of maximum absurdity. We were all punch drunk with exhaustion, preparing for the arrival of 24 dinner guests to what had been, that morning, a full construction site. All of the builders' equipment had been stashed in the unfinished study behind closed doors. The dining room and living room were scrubbed of construction dust. John and I were still hanging curtains an hour before the guests arrived. When I couldn't find the harp for one of the table lamps, John's teenage son, Gus, ingeniously bent a piece of coathanger to hold the shade.

"I think it nicely announces the theme of the evening," I said proudly, pointing to my toilet "installation."

Brent and John waved goodbye. I'd barely dressed when the doorbell rang with the arrival of the first guests. They entered onto our front hall's unfinished floor.

"Plywood, huh? I hear it's the new thing." And then the party started.

The whole thing turned out to be a blast. After my husband and I fell onto our bed late that night, we agreed that despite all the stress of getting the house ready, it had certainly expedited the renovation. Without the pressure of the deadline, my kitchen would still be a bombsite. Our dining room would not have been painted. The living room would still be draped in dropcloths rather than new curtains. The job would have trickled on for weeks, maybe months. Instead, the next morning, we could wake up to a largely finished house.

Now that the end of the construction is in sight, I can offer some more tips to those of you insane enough to consider a major renovation. These are not the conventional ones ("plan your budget carefully, get references, etc."), which are important but obvious. These ones are less obvious--but maybe equally important.

Tip No. 1: Live through the construction if you possibly can. In otherwords, don't move out of your house. This is a very personal decision, of course--maybe your marriage or mental health won't withstand it. But honestly, I don't know how people do move out and still get the renovation they hoped and paid for. Being on site certainly slowed down our renovation. The builders had to work around us. But being around also meant we were here to make decisions on the spot: Where do you want your light switches? Should this door swing out or in? How high do you want the kitchen backsplash? Etc. etc. Tiny decisions perhaps, but important ones. Only you know how you'll want your house to function when it's finished--and it will be you who is left to curse the stupidly placed counter outlet long after the builders have moved on.

Tip No. 2: Do not hesistate to express your views or ask questions--no matter how ignorant or simple they seem. Builders and subcontractors hate this. I only had to begin a sentence with, "Maybe we should...?" to cause Brent and John to flinch. Oh no, they think. Another "helpful suggestion from the homeowner." But in fact you are the homeowner. You are spending more money than you thought possible to get things just the way you want them. You may not have an architectural degree, but you can see if a ceiling light is going to be off-center--or that something that looked good on a plan does not work in reality. That's another reason to be around as much as you can. I found I could state some directions six times--even write them down--and they would still be ignored or forgotten about. That's okay. That's construction. Everyone is busy with a million things. But since you are the one who will have to live with the final product--or pay to correct it--you shouldn't feel intimidated from raising concerns.

Tip no. 3: Maintain a happy worksite. Yes, you are stressed. Yes, it was supposed to be done months ago. Yes, you are nearing bankruptcy. Yelling and screaming at your contractors won't make it better (although there are times for yelling and screaming: see next tip). Good builders want to make everything right. They are not comfortable doing shoddy work. If they know you appreciate their attitude and artisanship, they will work harder to solve problems and make you happy. Compliments are nice; a beer at the end of the day is better. And if it's a long project like ours, throw a holiday party for the crew; celebrate their birthdays, etc. You are all living together now. Why not make it pleasant?

Tip no. 4. Okay, this is an embarrassing one: Ladies, sometimes you have to act like a total *byotch.* Construction is a highly sexist business. That's just the way it is. No point in organizing a protest march. It's remains a guy world run along guy rules. Countless women have complained to me that when they asked a workman to do something, it wouldn't get done--or they'd be told it couldn't be done--but when their husband asked for the same thing, it was done right away. However, as John observed, most guys are terrified of their wives (actually he said all men are terrified of their wives)--thus sometimes the only way for a woman to get anything out of a workman is to behave like a shrew. John and I referred to this as "launching the nuclear codes." On the (many) occasions when John's calls were going unanswered by a sub, I'd say, "Is it time to launch the nuclear codes?" If yes, I'd leave a screaming message on the sub's cell phone--and funnily enough, the call would be returned. Immediately. And more often than not, the sub would be on the job the next day, if not that very afternoon. When all else failed, I had to swallow my modern girl pride further and [cough] ask my husband to step in.

Tip no. 5: Create "oases of civilization." You may be reduced to cooking out of a microwave or George Foreman grill for months on end. Just make sure you always have somewhere to sit down to a civilized meal in the evenings. Follow the example of British explorers in the African jungle: An old table with a cloth thrown on it; some folding chairs; china plates and wine glasses--these make all the difference between sanity and insanity. Also: enough tea lights can transform even a very nasty space into something quite magical.

Tip no. 6: Last one. Drink. Or medicate. Or both. No elaboration needed. 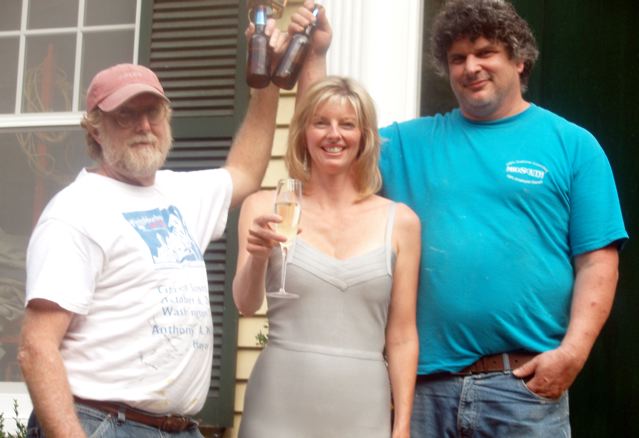