I was born and raised on the island of Lefkada, on the western coast of Greece, amidst the turquoise-blue waters of the Ionian Sea. My memories are decorated by the luscious green olive groves that surround the town, by the vineyards that adorn the Lefkadian hills and, foremost, by the famed lentil fields that dominate my father's hamlet of Englouvi. 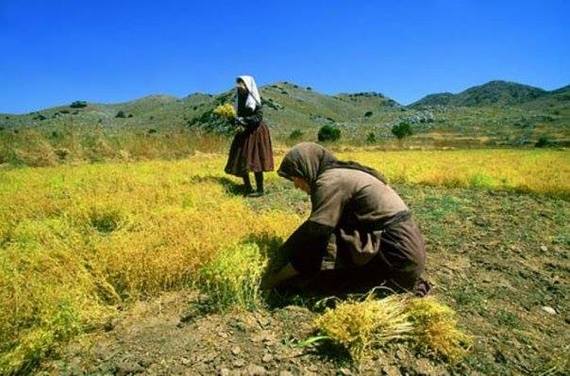 Englouvi, a small, stunning village located right in the center of the island at a height of 900 meters, was long forgotten, distant and isolated as it was on top of the Stauroton mountain range. Its beauty lies in that it is built on a slope overlooking the fields, offering dramatic views from many levels. The houses, made of stone and sporting wooden shutters painted in dark colors, were once equipped with outdoor ovens.

The central square of Englouvi is reminiscent of an oasis, with a gigantic old maple tree casting its shadow over the cafes where locals gather to sip ouzo or coffee, play French Tarot and, of course, to talk about lentils.

Yes, indeed, the main topic of conversation in Englouvi is the cultivation of that divine legume that grows on the small mount of Vouni. The fields, most of which belong to their original families, are extremely valuable as the composition of the soil of Vouni produces a unique type of lentil that does not exist anywhere else in Greece. 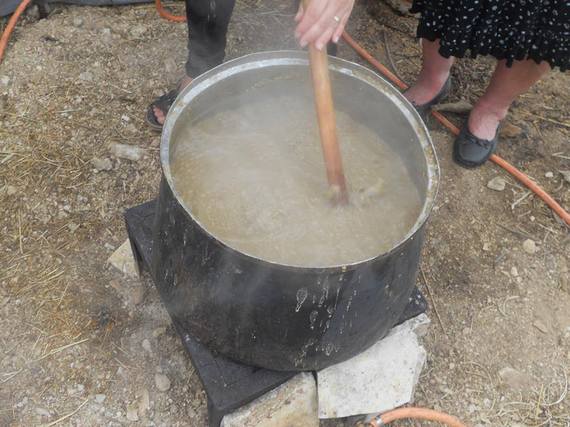 The Englouvi lentil stands out for its whitish color and its round, small shape. When it is boiled, it not only forms a heavenly, thick soup, but the beans, themselves, do not break apart, holding their round body. The Englouvi lentil soup is unique in that it becomes creamy, like a veloute, while the fruit remains intact. The taste is exceptional, renowned the world over.

The site of Vouni is a spectacle of great natural beauty with its stone retaining walls and the lentil fields that cover its hillside. The hill encompasses numerous small, round vaults made of stone from Byzantine times as well as the chapel of Saint Donatos, the patron saint of the lentil.

The seeds are sown from January to March and are closely monitored for three or four months until they are ripe. A huge effort is required to eradicate the troubling weeds that abound and persist throughout the growing process. Weeding is necessary if the delicate plants are to survive and, as a rule, this difficult task is the responsibility of the women of the village.
If all is right, the plants will grow and bloom and be left to slowly dry. Around June, the harvest begins, kicked off by a ritual feast where the locals once tilled their fields with plow horses that have since been replaced by modern machinery.

The inhabitants of Englouvi are very proud of their lentils and the younger generations are slowly becoming more and more involved with the growing, packing and marketing of the town's storied delicacy.

On the 7th of August, the villagers celebrate in honor of Saint Donatos. The day before, in the courtyard of the chapel, women cook huge cauldrons of lentils from the new harvest to offer them, accompanied by dried sardines, to the many visitors that swarm to the town. It is a memorable time, with locals and tourists alike partaking in the joyous festivities.

Traditionally, the Greeks cook lentils throughout the period of lent, before Easter.
The steps to cooking a perfect soup, as I learned from my adoring grandmother, Constance, in the confines of Englouvi, are as follows:

1) clean and wash the lentils thoroughly to remove any stones and soil;
2) in a pot, to each cup of lentils, add 7 cups of water, 1/2 cup of olive oil, 1 whole onion,
5 cloves of garlic, some dried bay leaves and 1 tablespoon of salt;
3) slowly stir the simmering soup until it thickens and becomes creamy;
4) add 4 tablespoons of balsamic vinegar to taste;
5) serve the lentils in a deep dish, adding a dash of olive oil as garnish.
The renowned lentil soup of Englouvi is purely divine! 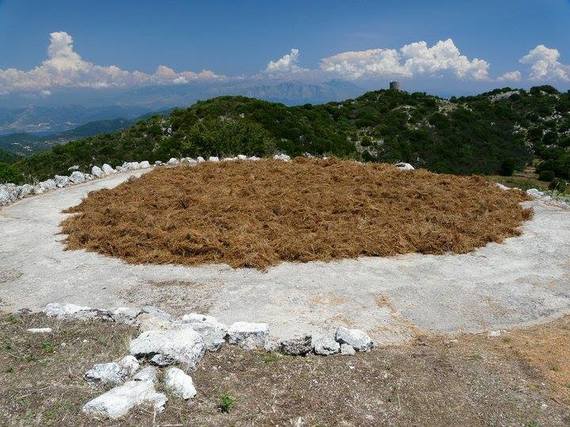