By Steve Lombardo and Jackie Cooper

It was one month ago that President Obama defeated Mitt Romney, garnering nearly 51 percent of the vote and more than 330 electoral votes. While it wasn't a landslide, it was certainly a solid victory. To be sure, some of blame for the Republican loss can be attributed to a fundamentally flawed candidate who a) emerged from the primaries in a weakened condition and b) had to deal with an improving economy. But a larger share of the loss may have been the result of a tarnished Republican brand. In fact, the Republican brand has become so blemished that it can no longer sustain its most important product: a presidential candidate.

As we know, brands are important. In the marketing world, brands give consumers shorthand codes about the character and identity of products and companies. Brands tell consumers how these products or companies are different, or how they are better. Whether it's the Nike swoosh or the Coke polar bears, brand images and logos are a product's core values. The best brands in the world find a way of both making consumers want to be part of their community and differentiating the product from their competitors. The 2012 Republican Party did neither. We know from our work in developing global communications campaigns that promoting brands requires addressing their emotional and rational sides. Doing so helps to ensure that our efforts will have the maximum impact with consumers and, in effect, win their votes.

In his book The Literary Mind Professor Mark Turner notes that there are three major pathways to the subconscious mind -- habits, beliefs and emotions. Storytelling can tap into all three paths.

Unfortunately for the Republican party, the voter habits, beliefs and emotions are all moving in the wrong direction. This is because their storytelling has been terrible. Brands are symbols that provide consumers with signals about a product's identity. For the Republican party, those signals are almost uniformly negative and, for that reason, every Republican presidential candidate is facing an uphill battle before he/she even begins to campaign. This isn't a guess on our part. We have the data to prove it.

We did a survey of more than 1,200 U.S. voters (conducted by our research arm, Edelman Berland) showing them a series of 14 words and phrases (positive brand attributes) and asking them to tell us which party -- Democrat or Republican -- the phrases better described. The results are stunning. As you can see from the chart below, the Democratic Party "won" on 13 of 14 attributes. Even more importantly, they won 12 of 14 among Independents. And on some of the attributes it wasn't all that close. The Democratic party emerges as far stronger than the GOP on several key attributes, including: "offers a hopeful vision of the future," "cares about people like me," "clearly explains how its actions will benefit me," "understands issues facing the middle class," "works to bring about change," "honest and ethical" and "smart and innovative ." 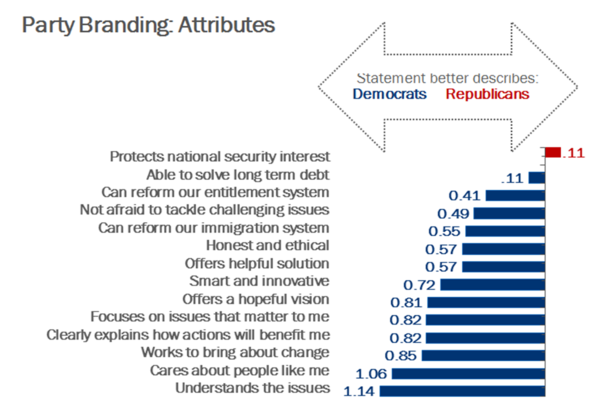 Note the bold words in each of these phrases. It would take a brand planner two minutes to conjure up a creative brief for the Democratic brand using these key words: hopeful, caring, beneficial, understanding, changing (for better), ethical and innovative. These are the brand signals that are currently owned by the Democratic party. They form the core of its brand identity. And thinking about what we said earlier about the types of attributes, our data shows that the GOP scores much better on the rational attributes we tested, while it fares far worse on the emotional ones.

Importantly, women thought that all 14 positive attributes better described the Democratic Party. It was the same result for young voters (those 18-34). In fact, for both women and young voters, the Republican party is barely in the consideration set. This helps explain exit poll data showing President Obama beating Governor Romney handily among these two important demographic subgroups.

We also asked voters to tell us which of the 14 attributes was most important. As you can see from the chart below, "honest and ethical" and "tackling the most challenging issues" are considered most important by voters. Interestingly, "protecting our national security interests" was tied for the least important of the 14. This was also the only attribute "won" by the Republican Party. In other words, the only positive attribute that forms the core of the GOP brand identity is the one that was LEAST important to voters. This would be akin to Nike doing best on a "has the prettiest colors" attribute and having that turn out to be the least important factor to consumers buying running shoes. 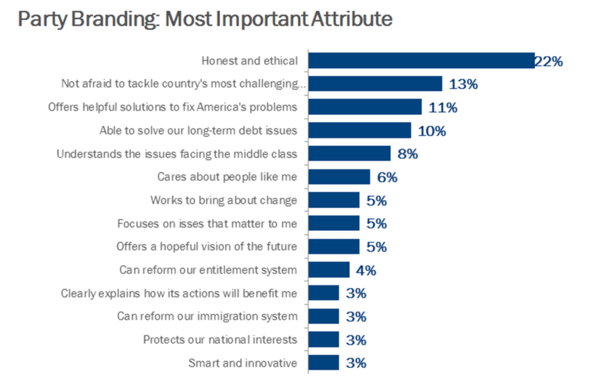 All of that being said, the Republican Party is not in a death spiral. But it does have a significant brand problem. And while the demographic challenges facing Republicans have gotten more post-election play, the party's brand image issue may be more central to its recovery.

The good news for the Republican party is that it is correctable. But it requires immediate action. Complicating things is that the Republican Party is not a single entity; it is, instead, a disparate group of actors and factions. But it can begin to demonstrate its vision in a better way. Like any brand that has lost its way, the GOP needs to clearly establish who it is and what it stands for. It needs to better relate to its consumer on those things that matter deeply. It needs to differentiate itself from the Democratic Party and communicate those differences in ways that are simple and easy to understand.

Most of all, it needs a leader who reflects those core attributes. And as we have noted above, it must address the emotional as well as the rational side of its brand by tapping into the habits, beliefs and emotions of the voter.

This will not be accomplished in the near term, but one thing is pretty certain: if the Republican Party does not do the above... it will not be winning elections at the presidential level for a long time to come.