We all know the story: Republican candidates, seeking to unseat their Democratic opponents in the midterm elections, run an anti-Obama platform in order to push their argument for a change in Washington. The campaign plan was elementary, basic and sidestepped some of the big issues that Americans care about, but the plan ultimately worked with flying colors. Nine Democratic senators lost their seats; Mitch McConnell kept his seat by killing his Democratic challenger by an unexpected margin; Democratic aides quietly blamed Obama for not campaigning for the party enough; and Republicans rolled into the next legislative session with a bigger majority in the House and a majority in the Senate for the first time in eight years.

Starting Tuesday, January 6, 2014, a new story will be written, and it revolves around a central question that some in the party's own rank-and-file are asking: Can the Republican Party transform itself from a party of obstruction to a party of governing? To date, we simply don't know whether Republican lawmakers will be able to make that transformation.

To his credit, there is one man in the Republican leadership who fully understands what the party needs to do over the next two years. In an exclusive sit down with Paul Kane of The Washington Post in his Capitol Hill office during the holiday break, incoming Senate Majority Leader Mitch McConnell stated flatly and without hesitation that his party needs to do a far better job in assuring the American people (despite winning last November's midterm elections) that Republicans are a responsible, serious group of legislators who deeply care about where the United States is going as a country -- and what needs to be done to make sure that the country is going in the right direction. Or, as McConnell said, "I want the American people to be comfortable with the fact that the Republican House and Senate is a responsible, right-of-center, governing majority." 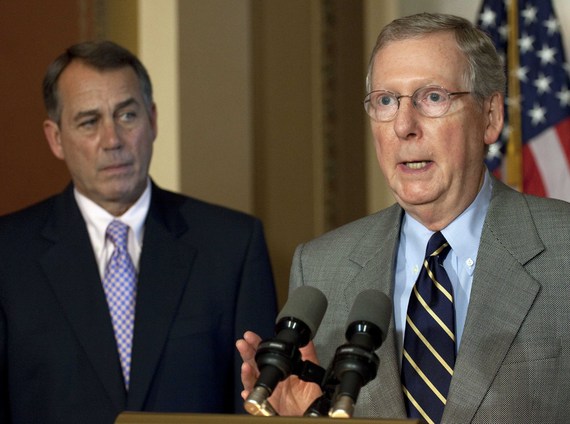 It's a great goal for the Republican Party to have, particularly two years before Americans go back to the polls to vote for their next president. But just as John Boehner has learned the hard way during his four years as House Speaker, Sen. McConnell will have to find some way to balance the competing goals of showing the American people that pragmatism is part of the Republican Party's vocabulary and allowing their more rambunctious and rabbe-rousing members (Ted Cruz, Mike Lee... pretty much anyone considered part of the Tea Party faction) to meaningfully express themselves through legislation on the Senate floor. It took Speaker Boehner a while to find the right balance, and he's under a constant microscope from the Republican hard-right that a conservative agenda for the country is being pursued. McConnell will have a similar microscope beaming down on him as the new majority leader -- a post that brings with it constant national media attention.

Despite what the pundits are saying (no, I'm not a political pundit, just an amateur), the opening few weeks of the Republican-controlled Congress will not determine how Republicans will choose to use their newfound power over the next two years. The opening weeks of the 114th Congress seem reserved for the more controversial, divisive, principle-oriented fights that congressional Republicans are stereotypically known for. Votes on the KeystoneXL pipeline, President Obama's executive action on immigration, parts of the president's healthcare law, President Obama's overtures towards Cuba, and Iran sanctions are all included on that list. Each and every one of these subjects will set the stage for an early Obama-Republican showdown and a round of veto's that will understandably bring Americans to the conclusion that Washington is in the same old gridlock.

If the strategy is to force President Obama to use his veto pen on issues that have broad, bipartisan American support (like the KeystoneXL pipeline), then Republicans are doing the right thing. But if the goal is to show that a Republican Congress is about more than confrontation, then it won't be enough to simply put Obama on the defensive.

Here's to hoping that the 114th Congress is better than the last.