I am not a registered Democrat. I vote based on who I believe will put forward initiatives that are best for me, my daughters, my community and this country.

This type of presidential race would have forced the American people to vote based on the issues and their belief in the candidate's ability to be the best Commander-in-Chief of the United States of America.

But this type of issue-focused, bias-minimized and party-crossing race is only in my dreams. The reality is, we are in a new era of presidential campaigning and debating. It is shocking, disturbing and, yet, wildly entertaining. I watch each debate with popcorn and a bottle of red wine.

The Democratic candidates, Hillary Clinton and Bernie Sanders, have maintained a level of decorum expected of one vying for the most powerful and respected position in the world. They've each thrown punches, but nothing below the belt and definitely, no biting of the opponent's ear.

The Republican party has rightfully and wrongfully been characterized as the party of the elite, the dignified, the suit, tie and pearls. The conservative ideology of the party very often mimics the posture and etiquette of many of its members, until now! In 2016, the GOP is a H.A.M. -- a hot ass mess! The Republican Party and its candidates are so conniving and classless -- ergo -- GHETTO! 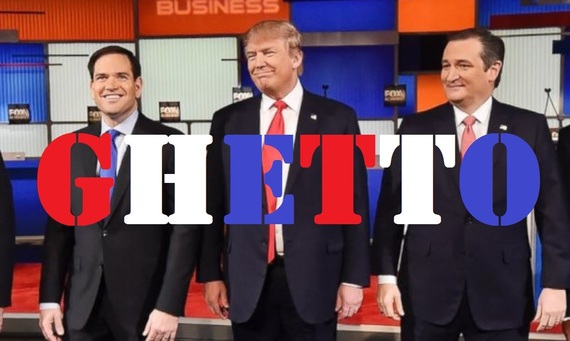 The Republican primary looks like a ghetto reality show, where we are one debate away from water being thrown in Marco Rubio's face and smearing his caked-on make-up. It's only a matter of time before Donald Trump's weave is pulled out and holier-than-thou Ted Cruz breaks down and storms off the stage in dramatic Kardashian fashion. We are only moments away from "Yo' Momma" jokes being scripted for the campaign trail rallies.

This Republican primary has been so ghetto and embarrassing to the GOP. I can only see it getting worse before it gets better. As Bette Davis famously warned in All About Eve, "Fasten your seat belts, it's going to be a bumpy night."

You know the Republican Party is Ghetto when: