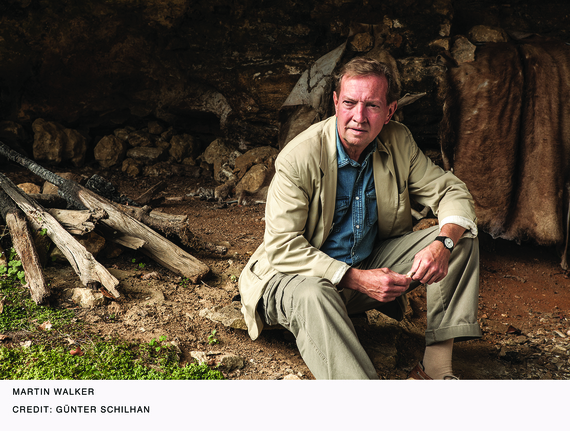 Martin Walker is a senior fellow of a private think tank for CEOs of major corporations. He is also editor-in-chief emeritus and international affairs columnist for UPI, and for many years has been a journalist for the Guardian. He has written five previous novels -- all international best sellers -- in the Bruno, Chief of Police mystery series. He lives in Washington, D.C. and the Dordogne region of France. His most recent Bruno novel is The Resistance Man.

Tell us about Bruno Courreges, chief of police of the small town of St. Denis in the Dordogne region of France.
For about fifteen years, we've had a house in the Perigord region of France. One of my great chums, Pierrot, is the village policeman for our small town. He's a hunter, a wonderful cook and a very decent man with an idiosyncratic method of law enforcement. He's also my tennis partner. He's very much the inspiration for Bruno.

Bruno, a former soldier, is the village policeman. He built his own house, cooks, loves his horse and his basset hound, Balzac, and has two very attractive and strong women in his life. In The Resistance Man, he must deal with a sudden crime wave leading to revelations about his country's past, and his own, as well. The Dordogne is a lovely region with great food and wine, a beautiful landscape, and incredible history. It struck me as an almost inescapable opportunity to write about Pierrot and the area, in a fictional way, of course.

Bruno is certainly an expert cook and oenophile. How much of you does he represent?
I wish I was as good a cook or had such knowledge of wine as does my friend. Or, played tennis as well as he does. There's a certain wistfulness about any writer of mystery stories, if there's an attractive hero. These days, particularly with Scandinavian noir, the idea seems to be to have an alcoholic protagonist who can't get along with women, and never speaks to his children. I prefer a likable, even admirable hero, someone like Bruno.

And, the women Bruno finds attractive are extremely independent and strong-minded. One, Isabelle, is passionate about her career and determined to let nothing stand in its way. She wants to live in Paris, which Bruno would hate. The other, Pamela, is a divorcee who has no intention of marrying, though she's quite happy to share her bed with Bruno from time to time. Bruno is desperate to become a father, yet he keeps falling for women who don't want to marry and have children.

Your novels tap deeply into French history. They're almost historical mysteries.
I studied history at Oxford. My earlier non-fiction books were historical. I wrote one about Gorbachev and Perestroika. Another involved the history of the United States in the Twentieth Century, while another was about the Cold War. History has always been a passion for me. As a foreign correspondent, I would dive into a new culture and read its history.

I've always been fascinated by French history in particular because of its grand divisions -- pro and anti-revolution of 1789; or pro-republic or anti-republic after 1870. There's still a division between those who were Vichy collaborationists in 1940, and those aligned with De Gaulle and the Resistance. In my village, there are still families who will not speak to each other because one was collaborationist and the other was with the Resistance. Some of this friction is reflected in the Bruno novels.

You've been a journalist and a non-fiction author. How did you make the transition to writing fiction -- specifically mysteries?
When we bought a home in the Perigord region, I felt a compulsion to write about the area, but not in a non-fiction venue. I wanted to convey something about the extraordinary local lifestyle and culture, landscape and the region's wealth of history. The area's human past extends back to pre-historic days and the famous caves of Lascaux are just up the river from our home. There are more than a thousand medieval castles in the Dordogne valley. The region is drenched in history.

About twelve years ago, I wrote my first novel, The Caves of Perigord. But that didn't really scratch my itch. I had this idea of writing about a policeman. I never took any writing courses. It just seemed to come naturally as an outgrowth of journalism, of simply writing. So Bruno, the chief of police of our little town was born, and I've been writing about him ever since.

With your busy schedule, do you write every day?
Before beginning a novel, I write a thirty page synopsis. Then, I set myself a target of a thousand words a day. Whether I'm on a plane or away from home attending a conference, I take out my laptop and get my 1,000 words written. It's part of my daily routine.

What do you do when you aren't writing?
I read a huge amount. I travel quite a lot -- even more so these days because the Bruno books have had success and impacted tourism for the Perigord. When they have museum exhibitions for the Lascaux caves, whether in Houston, Montreal or elsewhere, I help do the presentations with a team from the regional tourist board. I do the same for the international wine fairs for the wines of Bergerac. I was made chevalier of fois gras and became an honorary ambassador for the Perigord region. And, there are book tours keeping me busy.

Do you read other writers in your genre while writing a novel?
Sometimes. It depends on how much I'm travelling. If a new novel by Alan Furst comes out, I'll read it immediately. I read a great deal of history, biography, and a bit of science fiction as well.

When reading another author's prose, are you tempted to emulate that author?
Not really. If I go to a Shakespeare play, I don't start writing in verse. (Laughter). I think having been a journalist for a daily paper for so long affected my style; it's rather workmanlike. It's really quite well set. I think I write naturally. I write the way I think and speak.

Who are the writers you admire?
My hero is Sherlock Holmes. That was the first time I came across the mystery genre as a boy. I enjoy reading Donna Leon and Peter Robinson. I very much enjoy the art mysteries of Iain Pears, and really liked the first of the Stieg Larsson trilogy, The Girl with the Dragon Tattoo. I enjoy reading novels by Ian Rankin. I very much like science fiction and was struck when I read Robert Heinlein's The Moon is a Harsh Mistress. As for non-fiction, I recently read The Man who Changed China by Robert Kuhn. I also read Bourgeois Dignity by Deirdre McCloskey.

If you could have dinner with 5 people, either writers or historical figures -- living or dead -- who would they be?
First would be Eleanor of Aquitaine, the wonderful Twelfth Century woman who married two kings. Another would be Queen Elizabeth the 1st. She'd have to bring Shakespeare along with her. (Laughter). Then I'd invite Lord Byron. A fifth would be Abe Lincoln who I think would get along very well with Eleanor of Aquitaine.

If you could invite some contemporary people, who would they be?
Bill Clinton would be one. We were together at Oxford. Later, as a journalist, I covered him a lot; and from time to time, he graciously invited me to join him on Air Force One. Another would be Mikhail Gorbachev. Then, I'd invite someone I've never really understood -- Angela Merkel. I find her rather shrouded in mystery, but obviously, she's very accomplished. As for contemporary writers, I'd love to have Eric Flint at dinner. His mind is so very interesting. He began a series called Ring of Fire, which is a wonderful historical creation. I would like to have C.J. Samson at the table; he's written several marvelous books about an English lawyer living during the Sixteenth Century. I wouldn't mind having Ian Rankin there, too.

Where would you dine and what would you eat?
I would take them all to my home and cook them a grand Perigord meal. We'd start with a soup made from a duck's carcass. We'd then go on to an omelette au touffe with eggs from my own chickens and truffles from the hillside near our home. I would cook Aiguillette de canard, using a thin strip of meat just below the breast. I would cook it with mustard seeds and honey. I would add to that, pommes sarladaise, which are potatoes thinly sliced and cooked in duck fat, with garlic, parsley and truffles. It would all be done in the Perigord style.

And the wines?
The white wine would be a Bergerac sec from Chateau Jaubertie. Then I would offer everyone a deeply robust 2005 Chateau de Tiregand. It's made by a friend of mine in the village.

Would Bruno be there?
Absolutely, as would Pierrot. We've had this particular meal on several occasions. Oh, and I'd also serve some fois gras. I would serve it with a glass of chilled sweet wine, Monbazillac from Chateau de Tirecul. It's something akin to Sauternes. I would finish it off with some cheese, of course.

What's next for Martin Walker?
I've finished number seven in the Bruno mystery series. It's called Children of War. I'm about to go off on a U.S. book tour. Then, I'll return to France where I'll be working away on Bruno number eight. I'll also be judging a fois gras competition. Then, for one month, I'm off on a book tour in Germany. I'm starting a futurology project about what Germany may look like in the future. It will all keep me happily busy. And, when I get back to France, I'll be planting my vegetable garden.