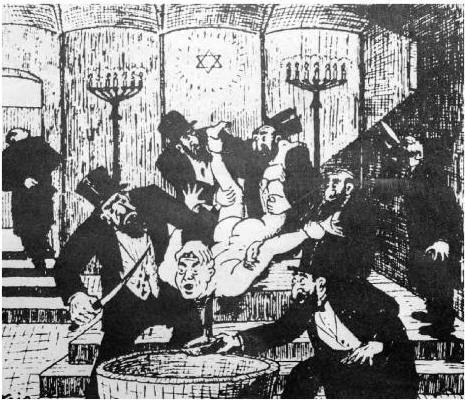 From the Nazi newspaper Westdeutchen Beobachter of Cologne (public domain).

One of the most bizarre accusations against Jews dates back to the Middle Ages and continued well into the nineteenth century. The Nazi propaganda machine revived the myth in the 1930s. Jews were charged with engaging in ritual murders of Christian children and using their blood in the preparation of Passover matzos. There are at least 150 recorded persecutions of Jews for this ritual murder charge -- and probably many others that were not recorded.

A particularly notorious occurrence took place in Hungary in 1882. One day in the village of Tiszaezlara, a young Christian peasant girl, Eszter Solymosi, did not return from an errand. After she had been missing for a few days, local Jews were charged with ritual murder. Violence and pogroms erupted and quickly spread throughout the region. A number of Jews were imprisoned, some for more than a year.

Two months after the girl's disappearance, a body was found in the local river. The authorities identified it as that of the fourteen-year-old Eszter, but her mother denied that it was her daughter, although clothing on the corpse was later identified as Eszter's. Forensic examination of the body revealed that there was no neck incision, thus ruling out a ritual killing. Eventually the thirteen accused Jews were acquitted.

You might shake your head at this grim piece of history and then be comforted that those hate-driven persecutions were rooted in a primitive bygone era. But think again. To this day, the girl's gravesite draws anti-Semitic pilgrimages. In April, 2012, many news sources reported that Zsolt Barath of the extreme-right Hungarian Jobbik party sought to reopen the 1882 blood libel case. He questioned the acquittal in a speech in Parliament: "The Jewry and the leadership of the country were severely implicated in the case." Barath attributed the acquittal to "outside pressure."

Despite a reported Jewish revival in Hungary and a forthright statement by the Deputy Prime Minister of a commitment to fight anti-Semitism, the rise of the far right, with its anti-Semitic platform, is troubling. That's what inspired Ivan Fischer, conductor of the Budapest Festival Orchestra, to compose his opera, The Red Heifer, which premiered in Budapest in October, 2013. It tells the story of the 1882 blood libel case and exposes the irrationality and anti-Semitism of the ugly episode. For Fischer, the opera represented the artistic expression of an idea that had been percolating in his mind for 25 years.

In one scene, as a raging crowd calls for retribution against the Jews, the bass-baritone playing Lajos Kossuth, the nineteenth-century Hungarian statesman, performs a passionate aria, crying out, "I am ashamed by the anti-Semitic agitation; as a Hungarian, I feel repentant toward it, as a patriot, I scorn it."

While some Jews may be reluctant to resurrect an ancient source of pain and suffering -- thus fanning the fires of hatred -- Fischer, a Hungarian Jew who lives in Berlin, is committed to confronting anti-Semitism head-on.

"Blood libel" has deep historic roots in the antagonism between Christianity and Judaism that began in the first century when the emerging Christianity struggled to separate from Judaism and establish an independent identity.

At first Paul, the recognized founder of Christianity, sought to make his brand of Judaism the new world Judaism, with Jesus at the helm. He hoped that it would be easily available to everyone. That didn't happen, and divorce became the dedicated path. Still, Christianity faced a bumpy road, since it was founded on Jewish prophesy, and there was the pesky fact, documented in the Gospels, that Jesus remained a dedicated Jew throughout his life.

As late as the fourth century, even after the Council of Nicaea established a unified Catholic Church, much of the Jewish/Christian populace didn't grasp the difference between the two religions. Many Christians continued to worship in synagogues, as evidenced by the homilies of St. John of Chrysostom, which castigated Christians for continuing to embrace Jewish practices. Several Church policies helped to finalize the divorce: the charge that Jews collectively were responsible for killing Jesus, the promotion of the idea that Jesus rejected Judaism, implying that he was a Christian from birth or that he later converted to Christianity, and the popularization of the blood libel charge that demonized Jews.

At the same time, Christian art, perhaps inadvertently, reinforced the distance between Christianity and Judaism by virtually eliminating any Jewish connection or identity for Jesus, his family, and close followers. Throughout the Middle Ages and the Renaissance, wealthy patrons and Church officials thirsted for art that was thoroughly and exclusively Christian Images are powerful in framing the way we see reality. In this case, the Christianized images of Jesus strengthened the illusion that Jesus and Jews were of different ethnicities and religions. This is particularly evident in artworks that depict Jews -- the "others" -- as dark and menacing. In contrast, they pictured Jesus and his family and followers as blond and fair-skinned Northern Europeans, immersed in regal settings and surrounded by Medieval and Renaissance saints and Christian artifacts. Further protecting these distortions, which could not be substantiated in the Gospel accounts of Jesus' life and ministry, the Church discouraged Christians from reading the New Testament on their own for a thousand years -- and forbade the bible being translated into native languages.

It's regrettable that many forces converged to obfuscate the common ground of Christianity and Judaism. Perception of similarities or historic ties can have dramatic impact, as Hungarian politician Csanad Szegedi discovered. In 2012 Szegedi, sometimes attired in a fascist uniform, espoused virulent ant-Semitism as the number-two official in Hungary's notorious far-right Jobbik party. Then he discovered his Jewish roots. His mother and maternal grandparents, he learned, were Jewish. In a stunning transformation, Szegedi is now a practicing Jew. Not only does he celebrate Shabbat and attend synagogue, he is studying the Talmud and is making an effort to follow Jewish dietary laws and the 613 commandments in the Torah. For religious instruction he connected with the orthodox Jewish Hasidic Chabad sect in Hungary; with the Chabad he visited the Yad Vashem Holocaust Memorial and the Western Wall in Jerusalem.

Stories like this make us wonder what would happen if Christians and Jews would recognize the firm common foundation that both religions stand on. What if Jews would look at Jesus and see a faithful Jew (even if not accepted as Messiah) and Christians would look at an orthodox Jew and see Jesus? Would this shift in perception spawn a significant step toward the reconciliation and mutual respect that Pope Francis recently endorsed?

Toward this end, I am organizing an important art exhibit -- "Putting Judaism Back in the Picture: Toward Healing the Christian/ Jewish Divide" -- that embraces the two sides of the Jesus story: Jesus the dedicated Jew and Jesus whose life and teachings inspired a new religion. The exhibit will feature new renditions of Medieval and Renaissance paintings that portray Jesus' Jewish heritage and place him and his followers in their natural habitat and dress (see examples at the exhibit website). To illustrate the two sides of the Jesus story, it will also include works that integrate Christian and Jewish elements--for example, as in Mark Chagall's crucifixion paintings.

Artists are invited to contribute, proposals, and renditions for this exhibit, the goal of which is to put Judaism back in the picture. The artworks are not confined to any one method or style as long as they offer a new and more historically accurate vision of the story of Jesus.

If art can help heal ancient wounds perhaps Ivan Fischer would then compose an opera of celebration rather than shame.