A few years ago, I scored my first bottle of genuine absinthe from a French company called Jade Liqueurs. You may not know much about absinthe, because it was banned in the USA in 1912. Sometimes called "the green fairy," absinthe was said to cause hallucinations and drive drinkers of the stuff to insanity and murder. Needless to say, I was intrigued. It took weeks, and a ridiculous shipping price, for the bottle to arrive. After all, the stuff had to be virtually smuggled into the States. But even though its sinister reputation had since been scientifically disproven, everyone I know still wanted to try some. So I decided to throw an absinthe party. 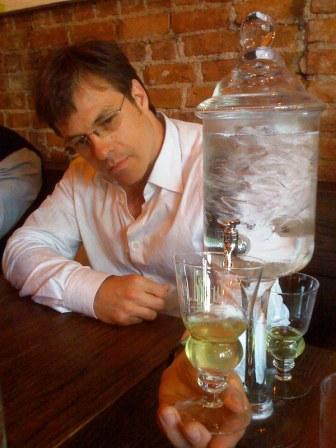 Now, absinthe is a strange little spirit. It's distilled entirely from herbs, including anise, fennel, and artemis absinthia, a type of wormwood that gives absinthe its name. Its powerful flavor makes it difficult to mix into cocktails. You can't do absinthe shots, or simply pour it into a glass with ice. The ideal way of preparing it for human consumption is a meticulous, time-consuming task involving cold water, sugar cubes, and slotted spoons. The process is called louching, and it has to be done just right. Add too much water and the drink tastes flat. Too little, and the high alcohol content will singe your taste buds.

In a nutshell, absinthe is not a ready-made party beverage, even if my apartment was filled with would-be Toulouse-Lautrecs ready and eager to sample the contraband hooch from across the pond. After a couple of bouts of louching with no hallucinations (and thankfully, no murders), most of my guests were ready to move on to more simple and traditional methods of intoxication. As one imbiber said, "It tastes... weird." That's true -- if you've been weaned on whiskey, tequila, vodka and the like, a spirit distilled from medicinal herbs won't taste like anything you're familiar with.

Not long after my party, the ban on genuine absinthe was lifted in the U.S. thanks largely to the efforts of Ted Breaux, the founder of Jade Liqueurs. Breaux almost single-handedly proved through modern chemical analysis that absinthe, consumed responsibly, will only affect your sobriety, not your sanity. And in 2007, Breaux, along with Viridian Spirits, introduced Lucid, the first genuine, unadulterated absinthe to be legally sold Stateside since the Taft presidency.

The challenge in bringing a formerly-verboten potion to the masses is twofold. First, thrill-seekers and purists need to be convinced that Lucid is the real deal, and not some watered-down absinthe substitute like Pernod or Absente. And second, the imbibing public has to be persuaded to try a liquor with flavors and aromas unfamiliar to the American palate -- and which won't even make you hallucinate or generally drive you 'round the bend.

That's why today, Breaux considers his job "15% distillation and 85% education." He's spreading the word about Lucid, and absinthe in general, to almost anyone who'll hear him out. "Basically," he says, "the whole future of the category depends on education. And that's the biggest challenge right now. Seasoned enthusiasts, cocktailians, mixologists, spirits tasters, judges -- all became novices in the world of absinthe. Because, who has tasted vintage absinthe? And until you do, it's hard to get a basis of perception. Modern Pernod isn't even close. I mean, what's a bottle of Thunderbird compared to a cabernet sauvignon?"

It's pretty cool to talk with someone who almost unquestionably knows more about a given subject than anyone in the world. And it's even more cool when that subject is something as interesting and fun as absinthe. It's somewhat surprising, then, to find out that fifteen years ago, Breaux didn't even know what absinthe was. "Back in '93, I was a chemist, working in a research lab, and a colleague of mine mentioned absinthe in a passing comment. I said, 'Yeah, what exactly was that?' And he said, 'It's that green liquor that makes you crazy.'"

Breaux was intrigued -- hell, who wouldn't be? So he did what any good chemist would do, and consulted the Merck Index to find out more about absinthe's notorious side effects. "It just had a few generalities about it," he says, "and then it had this note. Verbatim, it says, 'Caution: ingestion of the liquor absinthe can cause hallucinations, convulsions, death.' And it just goes to show you just how widespread the misconceptions about absinthe are. I mean, even the most intelligent and educated and credible among us were not spared."

Breaux read everything he could on the subject, but still had lots of questions that no living soul could answer. So he began an odyssey that led him to France -- which was Absinthe Central back in the 19th century -- where he tracked down bottles of vintage, pre-ban absinthe and chemically analyzed them for evidence of thujone, the substance allegedly responsible for absinthe's mind-altering effects. "The technology to do that didn't exist until maybe the 1960s, 1970s," says Breaux. "By that time, [absinthe] was long gone." The analyses turned up only trace amounts of thujone, and nothing else deleterious. So absinthe didn't make generations of European and American drinkers crazy, it just made them drunk -- absinthe has a very high alcohol content.

At the same time Breaux was making his chemical revelations, a new wave of absinthes was emerging out of Eastern Europe. "I saw the whole resurgence of interest in absinthe unfold, and I saw it unfold badly, with all these products from the Czech Republic that don't bear any resemblance to real absinthe. These products are alcohol with a little bit of flavoring and green dye added to it, and sold at ridiculous prices, because they realized that tourists would buy it. Because who knows any better?

And thus was born Jade Liqueurs, one of the geekiest-yet-coolest endeavors in beverage history. By recreating specific vintage absinthes to the letter, Breaux created a time machine for the taste buds. He grew the herbs on the same terroir. He found a 175-year-old distillery, with the original equipment, in which to make the stuff. He had a special base spirit prepared the same way it had been 100 years ago. He distilled every batch himself, by hand, in very limited quantities. He even created vintage-style labels for the bottles.

Breaux and Jade Liqueurs were the catalysts for an absinthe renaissance. Breaux was featured in countless magazine articles and TV shows, and his absinthes started making their way into the States -- no easy task considering the stuff was still illegal here. That's where the lawyers who were to form Viridian Spirits came in. "They approached me," says Breaux, "and said 'Look, with the science that you have and the credibility you have in this field, we have a very good legal mechanism, and we feel very confident that together, we could make an effort to overturn this silly ban that's been here in the US since 1912.' I told them, 'I'll tell you what. I've got the product for you, and if you can do it, then we'll do it together.'" The rest is alcoholic history.

On March 5, 2007, Lucid hit American watering holes and liquor store shelves. While it's not a by-the-book recreation of a specific vintage absinthe, it's definitely in the ballpark. "If you went to a French bistro or café in the 19th century and ordered absinthe -- I mean a decent place -- you would've gotten something like Lucid," he says. And even though 21st century palates are no longer accustomed to the stuff, if you've got an open mind and a taste for adventure you'll find plenty to love.

Anise is the dominant flavor, but you get a nice balance from the fennel, a slight edginess and from the wormwood, and an earthiness from the other herbs. Lucid is slightly sweet on its own but acquires an almost minty coolness when sugar is added. Its clean mouth feel and refreshing finish belie its high alcohol content; the louching process helps eliminate the burn that you'll get if you try the 124-proof libation straight.

Absinthe-based cocktails have been around since the 19th century (the most famous being the Sazerac), but modern bartenders are only beginning to explore its possibilities. As Breaux puts it, "What I like to say about vodka is that it goes with everything. It's like wearing black. Absinthe is like wearing purple. But the thing about wearing purple is that if you know your shit, you can do great things with it." One of my favorites is the St. Germainiac -- an ounce of St. Germain elderflower liqueur, about a quarter ounce of Lucid, ginger ale and a healthy dash of Angostura bitters, with an orange twist.

Contrary to public perception, Lucid won't make you hallucinate or turn homicidal. In fact, it imparts what Breaux describes as "a sensation of clarity. I drink red wine, I feel like my mind just drops down. Not with absinthe -- I feel somewhat stimulated mentally. One word that keeps coming up when people describe this is lucid, or lucidity. And hence the name of this product." He adds, "It's kind of like an herbal speedball. Some herbs are reputed to be excitatory, and some that are sedative, so you have this kind of push-pull thing going on." If that's not a selling point, I don't know what is.

Absinthe may still be a long way from mainstream acceptance and general understanding, which means that Breaux has a lot of work to do. And he's not shrinking from the task. "I'm on the road a lot. And I'm just one person, but fortunately I get enough press and media. I'm trying to educate the press and the media, mixologists, bartenders, the public, as to what they're buying." His mission, apart from getting more Americans to try real absinthe, is to keep them away from the bogus stuff. "There are profiteers that realize that they can put anything green in a bottle and call it absinthe and jack up the price, and take advantage of a largely ignorant consumer base, and sell it. Hence, the need for education.

"If it were easy, it wouldn't interest me. But the good thing is that I know I'm doing the right thing. I'm on the good side - I'm on the side of truth."

I'll drink to that.