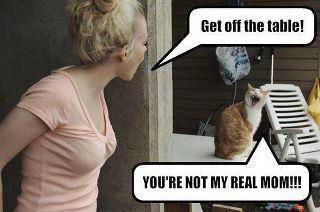 The Real Housewives of Orange County just finished up their tenth season. Meghan King Edmonds, a newcomer to the series, stood out for a couple of reasons. First, she's 30 years old as compared to the other housewives who are in their 40's and 50's. Second, she's the only stepmother in the bunch.

Simply stated, stepmothers aren't the most understood. The "evil" stepmother myth is alive and well. Other assumptions made: gold digger, home wrecker and interloper. If you're a childless stepmom, even more suspicion is cast. Yet, stepmothers are expected to be saints; expected to come into a ready-made family and start parenting children that aren't theirs. They can't lose their tempers, get sick of the kids or struggle like biological mothers can. They need to be saints or at least Buddhists who somehow learned to let go of their egos due to years of silent retreats.

Meghan, like many stepmothers, jumped into her role with great vigor and good intentions. She was, after all, a stepmother and didn't that imply that one is supposed to be parenting a kid that isn't theirs?

Meghan was quite open and vulnerable about her confusion revolving around her attempts to stepparent her 17-year-old stepdaughter, a girl closer in age to her than her husband, Jim Edmonds.

I admired her good efforts in trying to do her new role well. She had a commuter marriage and 50 percent of the time she was left to supervise her husband's teenager whose mother was dying of cancer.

In a move she found parental, Meghan made a list of rules for Haley, a typical teenager who wasn't excited about anyone telling her what to do and didn't seem too enthusiastic with any of Meghan's earnest efforts. When Meghan informed her of the new rules, Hayley flippantly asked, "Rules?"

Meghan responded, "Guidelines that need to be followed in order to respect the home." Hayley, who seemed distracted, mumbled, "Um, okay."

Meghan went on to tell Hayley that she thought Hayley would do better in school if she had more structure. Hayley's response, "Well, I think we should wait until Father comes home." Meghan reminded her that she and her father were a team. Hayley said, "I think you're nuts."

While Hayley's response may be typical of any teenager, especially a teenager who's being given orders from a woman she's known for only 1.5 years, Meghan hasn't yet caught on to the fact that the role of stepmother is vague and ambiguous or that most stepfamily experts, myself included, caution stepparents not to parent kids that aren't theirs, especially teenagers.

Meghan lamented to the camera, "To jump in with a 17 year-old and try to parent is nearly impossible. Since Jim is in St. Louis, I feel alone. I feel like a failure."

Meghan is no failure and she's right about it being near impossible. Her attempts to parent, although misguided, were good-hearted in nature, like so many other stepmothers who devote themselves to being the best stepmom they can be.

Meghan, in one episode, innocently shared with the other housewives (all mothers) that she saw herself as one of this girl's mother. She went so far as to say that she actually wished she were the girl's mother.

The mothers didn't take too kindly to this, as mothers tend to be protective of the children they've given birth to and raised from scratch.

One of the housewives, mother to two, asked Tamra, mother of four, "Can you imagine if your ex-husband's girlfriend started crying because she's not the mother of her children?" Tamra quipped back, "I'd feed her to the sharks."

Meghan was left to be a lone wolf in her attempts to do what she thought was right and continued to insist that "failure is not an option."

What Meghan also may not have known was that she was not alone. This scene is being played out in millions of stepfamily homes by similarly well-intentioned stepmothers. It had nothing to do with her being a success or a failure.

The research and clinical experience shows that children do not readily accept a non-biological member into their family and that it takes anywhere from 4-6 years for all members of the family to feel comfortable with one another.

If one stops to think about it, it's common sense. In most cases, blood is thicker than water and attempts to parent children that aren't yours are often met with resistance and disdain.

When Meghan complained to her husband about her futile efforts, he told her to back off. You can palpably sense the loneliness she felt when trying to figure out what the hell she was supposed to be doing.

Eventually she wisely realized that it was better to be an ally to her husband's daughter than try to be her mother. This resulted in a smoother and friendlier relationship with her stepdaughter.

Like Meghan, most stepmothers have to learn the hard way that their stepkids aren't doing cartwheels over their arrival. They often express, "I never knew it would be this hard" and their partners don't understand what the big deal is.

It is a big deal. Remarriage with children has a 62-74 percent divorce rate. I've worked with stepcouples for over 15 years and the truth is that the difficult and challenging nature of integrating non-biological members into a ready made family isn't easy.

The culture doesn't care too much about stepparents, stubbornly insisting, "they knew it was a package deal."

The culture needs to start caring. Stepfamilies are mainstream in our society despite the media's insistence on almost singularly focusing on nuclear families. According to a nationwide Pew Research Center survey, more than four-in-ten American adults have at least one step relative in their family -- either a stepparent, a step or half sibling or a stepchild.

Stepmoms need support from other stepmoms who know how hard the job is. They need their partners to understand the constant judgment and rejection that is inherent in the role.

While Hayley's mother was very supportive of Meghan before she sadly passed away, many mothers aren't so accepting of the women who come into their children's lives, seeing them rather as competition and threats. Kids pick up on this and it puts them in untenable positions.

I appreciated Meghan's willingness to show the difficult process any woman partnered with a man who has children goes through. She started off with a strong determination to parent and mellowed into being a wonderful ally for her stepdaughter.

That showed a lot of love, whether you're a parent or not.

More:
meghan king edmondsstepcoupledivorcestepparentingstepfamilies
Newsletter Sign Up
A weekly guide to improving all of the relationships in your life
Subscribe to HuffPost’s relationships email
Successfully Subscribed!
Realness delivered to your inbox