Meredith Ramirez still has the first hat her friend Jean Mundiguing knitted for her over two years ago. Meredith is the director of The Ricefield Collective, an organization dedicated to creating quality products, handcrafted by local Filipino knitters and Jean is the current general manager of the operations in the Philippines. I recently sat down with Meredith and learned more about the organization and mission to help local farming communities obtain income while keeping their farming and cultural traditions alive.

Ricefield began when Meredith first traveled to Uhaj, Banaue, Philippines as part of her research. Uhaj is nestled amongst the Rice Terraces of The Philippines, a UNESCO World Heritage site. Meredith was studying the local poetry traditions of the region and between work sessions chatted with Jean, a local laundress at the inn where Meredith was staying. Meredith and Jean spoke about Jean's life and the challenges Jean faced in the area. Meredith was often knitting while they were chatting, and she showed Jean some basic techniques. Jean quickly took to the skill and she suggested that Meredith teach other women how to knit when Meredith returned to Uhaj next summer. 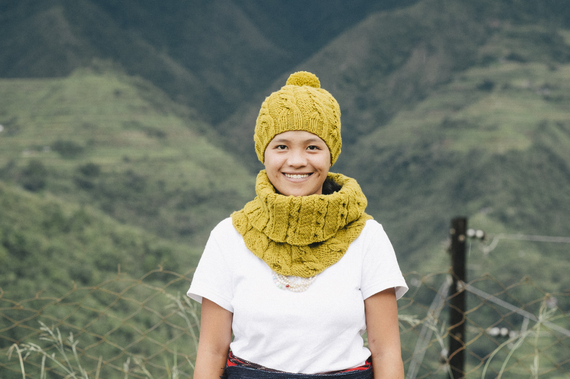 While Meredith was excited about the prospect of working with local women in Uhaj she had no idea the depth of their commitment until she returned next summer. Meredith recalls:

I sent [Jean] maybe one card in 10 months, and I had no idea how serious she was. I thought maybe I'll bring seven pairs of needles, and I'll bring some of my yarn stash -- knitters are like birds, we collect yarn all around our nests! So I brought all this not knowing what would happen. We arrived the next summer, in the middle of the night, and bright and early the next morning Jean was there, organized with 10 women who were ready and eager to learn how to knit. 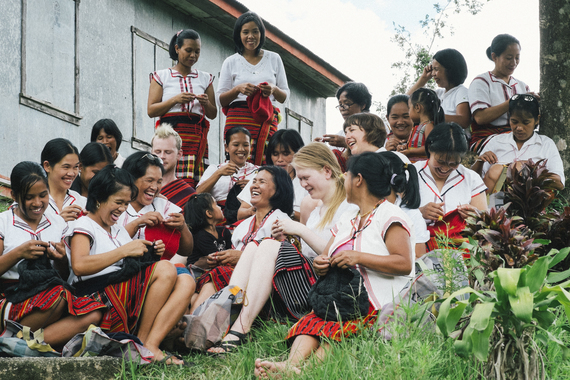 Ricefield designers and knitters in action

This local/cross global partnership is truly what is unique about Ricefield. The artisans who meticulously hand knit each hat and scarf are local Philippines women and the designers come from London and Amsterdam. They came to the terraces to learn about local culture and design items inspired by the region -- the Winnowers Cowl mimics baskets that winnowers use to separate rice grains from their chaff and the Dreamer Hat draws from traditional Philippine sleeping mats. Together these people have come across oceans to create beautifully designed quality products that would fit perfectly on the shelves of stores on 5th Ave. 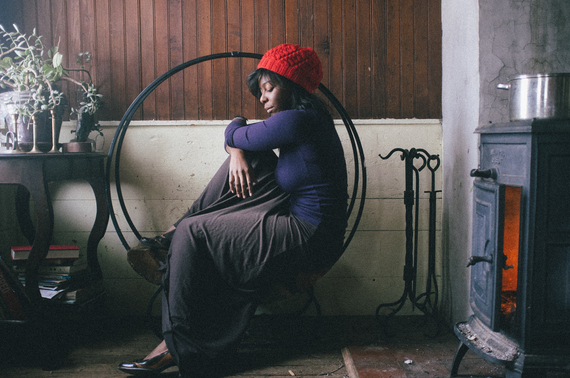 That commitment to design is a hallmark of the organization.. The Ricefield team believed in the ability of the local women to learn high trade skills -- the region is already known for loom work and other textile designs -- and create beautifully crafted products that are able to complete on a global stage.

We're designers, we're art school students. We wouldn't be happy just making cheap things that you could just create on a machine. There's care and design put into each product and we think that adds a real value to each piece.

The organization hopes that through design, they can break through stereotypes surrounding the non-western world.

Everybody knows about Africa. If you say 'Africa' it's like code for poor. But there are people everywhere trying to make ends meet. The Ifugao women may not technically be starving because they're farmers, but they have little income beyond what they grow, and that's no longer enough. We're trying to help these people before they reach the point of desperation and end up living in urban slums.

She was surprised by the amount of trust these women, many whom she'd never met before, placed in her and Jean. This trust was something that Meredith believes comes from her approach and exposure to the community. As a student the women of Uhaj saw her as an ally, and not a business executive looking to make a quick profit:

When they were training new knitters Jean found they made the mistake of thinking I some some business lady from the US. She was quick to point out that I was a student, and I had even abandoned my studies to help the community!

While not entirely true (she is currently on academic leave as she focuses on Ricefield, though she is quick to point out she only has her dissertation left to finish!), the idea that Meredith is there as a community member rather than as a strict entrepreneur has helped her gain some credibility with the local community: "They perceive me as a friend and anyone that comes into that context as a collaborator." This trust is something Meredith draws upon when facing the challenges as Ricefield moves forward.

Ricefield recently completed a successful Kickstarter campaign and launched a new webpage on October 22, 2013. With a homepage in place, the organization faces challenges as it grows and establishes itself in the apparel marketplace:

"Our products are priced similarly to major American brands and retailers, but they're unique in that they all have intricate designs and details that can't be replicated by machines. Though they are priced similarly, these hats and scarves from big retailers have a lot of advertising and marketing behind them. Our challenge is to get the story and quality of our products across and compete without the same large advertising department and budget."

Fighting consumer misconceptions is another challenge for Ricefield:

When people see our products and how well crafted they are they say 'Oh wow these come from the Philippines?' I don't want to be rude and say 'Of course they come from the Philippines and they're that good!" but that's what I always want to say! One of the major problems within apparel and fashion is the automatic cultural advantage -- countries are brands. If you go to a major retailer's website and their products were made in Italy, France, the United states, they will say 'Made in Italy' 'Made in France' 'Made in the United States'. But there are a lot of the products that will just say "Imported" and if it says imported it's code for those products are actually made in Bangladesh, India, and so on. People then assume it's imported from Italy, France, so on, because it's on this retailer's website.

Ricefield has begun to show the world the quality of Filipino products through a robust social media outreach campaign. This outreach strategy really taps at the mission of this organization to connect each consumer with the very person that created their product. Every purchase includes a hand signed card with a photo of the woman who knitted the product. The models of the products on their website are all knitters themselves, and the homepage proudly proclaims "Our Makers Are Our Models." Indeed this connection along all ends of the supply chain has begun to show in the community that has grown around Ricefield. Members of their Facebook and Pinterest pages come from all over the world, and they are connecting with knitters and non-knitters alike. The power of technology to connect the rice terraces of the Philippines to the whole world has indeed changed the way social entrepreneurs like Ricefield are able to engage the global marketplace. 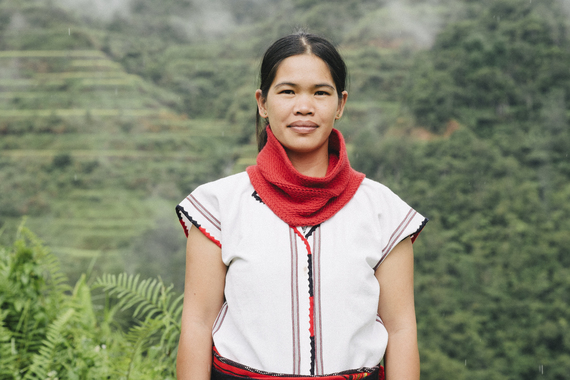 As I wrapped my conversation with Meredith, she mentioned a book she had recently read by Jacqueline Novogratz. Novogratz wrote The Blue Sweater, a book about her experiences starting philanthropic investments partially inspired by her experiences in the developing world. The story opens with an encounter Novogratz has while in Rwanda: she saw a boy wearing the very same blue sweater she had donated to a thrift store almost 11 years prior. The experience showed her the interconnectedness of the global landscape, and in many ways echoes the connections Ricefield is trying to create today.

Novogratz opens the final chapter in The Blue Sweater with this passage: "We have the tools to know one another and the resources to create a future in which every human being, right or poor, has a real chance to pursue a life of greater purpose." While Novogratz was mostly referring to the power of telecommunications technology, Ricefield has expanded that definition even further and gives women in the Philippines real chances to pursue lives of greater purpose, one stitch at a time.