The World Bank announced over the weekend a revised international poverty line. This is the benchmark used to determine the number of people living in extreme poverty in the 2030 Agenda for Sustainable Development. The first target under Sustainable Development Goal (SDG) 1 reads: "By 2030, eradicate extreme poverty for all people everywhere, currently measured as people living on less than $1.25 a day."

Make it $1.90 now, after the revision. An increase of more than 50 percent. Big news? It depends.

Revised poverty numbers have been expected for some time, since the International Comparison Program (ICP) (the global partnership that collects price data around the world to estimate purchasing power parities) issued its latest results last year. Purchasing power parities give the conversion rate from dollars into the local currency of each country that enables people to buy the same basket of goods and services. The newly issued purchasing power parities (referring to 2011; 2005 was the reference year for the earlier round) showed that one dollar, converted into local currency in each country, was buying less goods and services in 2011 than in 2005, and that there was more purchasing power in local currency. Therefore, initial estimates of poverty incidence based on the new ICP results suggested that we would see large or even very large drops in poverty incidence.

So why did aggregate indicator of poverty incidence change so little? Because the revision was made deliberately not to change the goal posts set by the $1.25 poverty line in 2005 prices. First, the poverty line of each of the 15 developing countries that was the base of that poverty line was adjusted, in local currency, to take inflation into account. Second, the inflation-adjusted national poverty lines of the 15 countries were converted into dollars using the 2011 purchasing power parities. After averaging them out, the resulting poverty line was $1.90. Thus, the increase of the poverty line reflects, essentially, the fact that in 2011 we faced a weaker dollar relative to the currencies of most developing countries than in 2005. The same might not be as true with the 2015 dollar value.

While the new international poverty line does not mean much change in poverty incidence either globally or at the regional level, it does imply major changes in poverty for some countries. The figure below compares poverty incidence (also called poverty headcount rate) using both the 2005 and 2011 poverty lines. Each dot represents a country, and the closer the point is to the 45 degree line, the closer the two poverty rates are similar to each other, and the less difference the revision makes. Most countries lie close to the line, but for some the difference is very large, for a few of 10 percentage points or more. 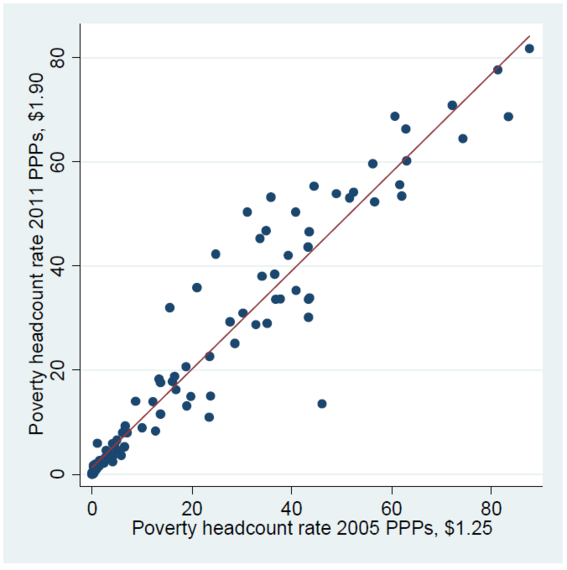 This is important, because even though the poverty line is constructed based on average for some developing countries, it then sets benchmarks not only for the SDGs, but feeds back into national policy processes for almost all developing countries. For instance, when used to determine the threshold of eligibility for social transfers, the poverty line will have great influence in determining the number of beneficiaries. In other words, Conditional Cash Transfers below the poverty line may see an increase that goes from nothing to 10 percent, depending on the country.

So here is the big news from the weekend's announcement. Even though there might be little impact globally, having a revised international poverty line may make a big difference -- positive or negative -- on poverty reduction performance, and can affect national policy making, budget allocations and social expenditure.