As far as the eye can see the mountains stretches gracefully strewn with ice and snow. The otherwordly scenery is going on forever. The sky is a lucid blue.

From up here, almost 7 miles above ground, the world seems wonderfully calm and forever peaceful. But nothing could be farther from the truth.

The flight attendant confirms that the landmass below is Turkey.

My thoughts wander to the fighting on the ground. How kurdish fighters are battling ISIS in the border regions between Turkey and Iraq. How Turkey's president Erdogan and Russian president Putin is waging a war, so far only with words, over the shoot down of the Russian fighter plane in November last year. How 2.2 million refugees are currently living in Turkish camps, while another 850,000 made the life-threatening journey across the ocean hoping to reach Greece and Northern Europe.

When I press the large interactive map embedded in the back of the headrest in front of me, the path on the screen speaks its own language. It's a sobering digital commentary to the state of the world below.

The flightpath makes a sudden detour. Instead of a beeline from our point of departure in the Arabian Gulf to our Northern Europe destination, the plane is taking a big curve avoiding specific airspace. I check the map. It's Iraq and Syria. 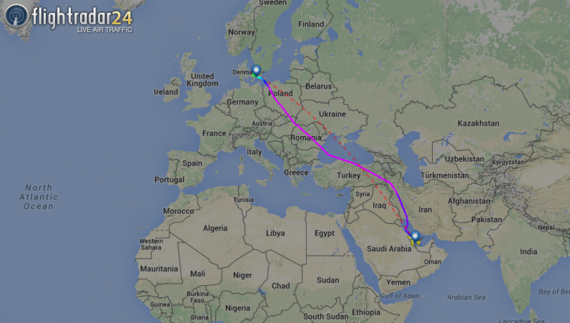 This is not for fun, burning more fuel, or meant to delay us but solely for keeping all of us safe here on this flight: The baby boy sitting happily clapping his hands in his mother's lap two seats away, the teenagers noisily fighting for the control over their armrest just behind me. We all want to arrive to our destination and reunite with our loved ones. But not all do.

The inflight entertainment offers 19 pages of movies to pick from: "New Releases", "Bollywood", "Hollywood", "Arabic" - and "All Time Greats". Curious, I tap the latter. I shuffle through North by Northwest, Gone With the Wind and The Giant and suddenly, there it is: All The Presidents Men. 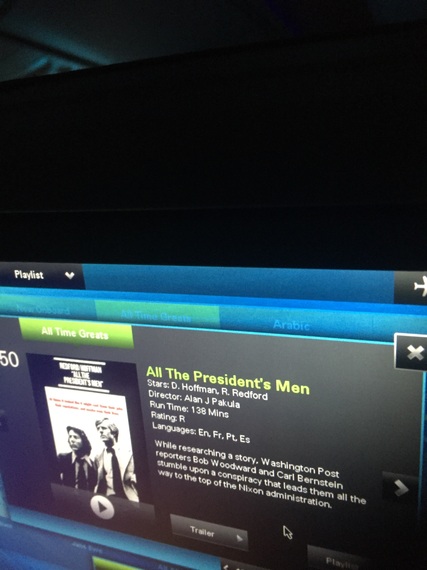 'All the Presidents Men' forever cemented the reporter as a folk hero. The warrior always fighting the battle between right and wrong. Personifying how the pen, (or typewriter), is mightier than the sword.

Bob Woodward and Carl Bernstein also became my heroes. In journalism school we all wanted to be like them. The movie poster was proudly showcased in the narrow hallways of our tiny student apartments, we held trivia games battling about who knew most about Katharine Graham and the legendary Ben Bradlee. We all wanted to uncover wrongdoings, keep power accountable, shed light on corruption and take some scalps on the way, when necessary.

It's safe to say that the movie went on to become a timeless classic, not just amongst journalists but also to the public. Why else would we find this 40-year-old film, complete with flares, polyester shirts and chain-smoking reporters among the inflight entertainment on newly minted passenger jet?

Today, like in the Watergate period, there seems to be so many wrongdoings for journalism to report and shed light on. There are many "crooks" on the ground below. Traffickers making money on refugees. ISIS and their radical supporters.

Politicians lighting bonfires of dissent with their polarizing rhetoric.

The list of "victims" is long too: The people of Syria, Iraq and other nations comes to mind: People who've lost loved ones, their jobs, their homes.

Out my window on the left hand side, many miles away lies France and Paris. A beautiful city marred by two violent terrorist attacks and decisionmakers scrambling to find answers to growing radicalisation.

Ahead, is Germany. With arson fires aimed at refugees and systematic sexual attacks on women celebrating New Year's Eve.

Soon we enter Scandinavian Airspace where my country Denmark and Sweden are fighting it out over borders. Here refugees walked on Danish highways stopping traffic -- but also stopping civil conversation in the public domain. They walked from the German border to Sweden, wanted to seek refuge there.

Sweden, a country the refugees trusted to be more welcoming than Denmark.

But, Sweden has now moved to close their borders implementing ID checks for everybody wanting to enter. Which then got Denmark to implement the same towards our borders to Germany.

Citizens of numerous European nations have divided in two camps. Pro or against refugees.
The middle ground has a hard time getting any press.

How will my country and so many others deal with the enormous stream of refugees fleeing from Syria? Or the many seeking a better life in western Europe from Africa nations where possibilities and opportunities are scarce? How will we manage to establish a conversation that bridge views instead of creating trenches? Will we choose to shed light on everything or only the parts that are faulty? Will we portray refugees as victims without hope or capable human beings with resilience and resources?

When the landing gear touches the tarmac, I am embarking on a significant journey myself with the potential to mend what is missing from news journalism.

I am taking on a position as Director of Constructive Journalism in the Netherlands, which will be a Worlds first. Windesheim University taking this bold step believe that journalism should stop victimizing victims and demonizing crooks. Should stop it's chronic focus on conflict. Should shy away from acting as polarizers.

Instead we will focus on
solutions,
facilitating a futureoriented debate,
expand interview techniques,
shed light on the middle ground,
work with journalists unrecognized hidden biases,
become skilled at what creates engagement,
view audiences as co-creators and share our learning curve.

I will stand on the shoulders of brilliant work already being done at Dutch media sensation De Correspondent and a range of media companies in Sweden, Denmark, Germany, The Netherlands, US and South Africa who already work systematically with adding constructive elements to their reporting.

In our current time and age, we need to see far. We need to look ahead.
Journalism do not mirror society, we move it.
But in which direction?