Any event involving multiple astronauts is a "must-attend" for a self-defined space geek like me. Last Thursday's Autodesk "Found in Space" Design Night mixed space-age design with actual space exploration. Workstations for creating original aluminum foil hats, loud techo-space sound (the DJ table at one point was manned by a father and son in matching spacesuits), the latest 3D printers (and a scale model Golden Gate Bridge made from one) mixed with old style arcade games and photo booths to create a properly eclectic flair -- or as host Jonathan Knowles oversimplified but did not overstate his summary for the assembled nerds: "space is cool."

Attendees met "Made in Space's" Mike Chen, who's putting 3D printers on the ISS by year's end (spare parts needed, no problem!) and Bob Richards, whose "Moon Express" will launch unmanned moon landers in 2016 to mine for resources to replace those we're rapidly depleting here on Earth. Original moon lander Buzz Aldrin even sent a video greeting by way of his son Andy, who was present.

Satisfying our hunger for female role models was Astronaut Dr. Yvonne Cagle, the person everyone wanted to talk to. It wasn't just the familiar royal blue jumpsuit with NASA insignia she wore, but her genuine interactions with the crowd, especially the youngsters, that made her so popular. 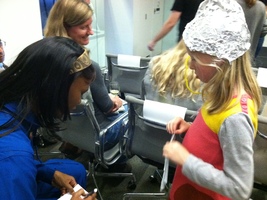 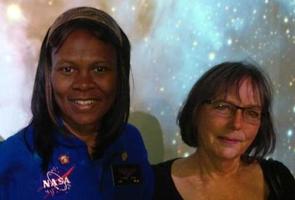 Canadian astronaut Chris Hadfield did not reprise the performance that made him virally famous -- his rendition of David Bowie's "Space Oddity" from onboard the ISS (now clocking in with 242,386 YouTube views), but instead provided me with my personal take-away moment, one that emerged from one of those quickie conversations people have after the presentations, when the presenters probably want to leave but audience members do everything possible to engage them and keep them from doing it.

When I told him I may be going to Mars, he asked, "How are you going to get there?" When I told him I'd ride on whatever Mars One came up with, he replied, "No, you're not just a passenger. You're a pilot." Then he asked me who was building my spaceship. "Lockheed Martin." But the latest news from Mars One was not good enough for him. "No," he repeated. "You have to build your own ship."

We were interrupted then, and that's probably why I've been mulling over his puzzling comments ever since. I'm nowhere near a rocket scientist and I know next to nothing about aerospace engineering. How am I going to build a spaceship to take me to Mars?

Then I recalled Hadfield was pretty much quoting lines from "The Right Stuff" scene in which the original Mercury 8 flyboys rejected the spacecraft built for them, and demanded instead on some degree of flight control, a hatch they could open from the inside with explosive bolts, and a window. They insisted they were more than passengers -- they were pilots.

I think the point Hadfield was trying to make is that anyone taking an extraordinary and potentially perilous trip into the unknown should be more involved in the entire process of preparing for the journey -- not necessarily in a nuts-and-bolts way, but, at the very least, in a design-and-function way. Where's my cup-holder? Are the seats comfy enough for a seven-month trip? Most importantly, how do I interact with the spacecraft, both in normal operational times and in case of an emergency? Where's my sense of control over my own space destiny -- and can I put my finger on it? Hadfield was right -- these features have to be built into the spaceship.

It was the perfect take-away from "Design Night," which was as much about dreaming the future as doing it -- starting with the windows.

The Right Stuff Space Impact Made In Space Design