On July 11th, Libyan dialogue participants initialed the Libyan Political Agreement at a ceremony in Skherat, Morocco. It has taken nine months of intensive negotiations and shuttle diplomacy by Bernardino Leon, the UN special envoy for Libya, to bring the factions involved in turmoil and civil war in Libya to this point. However, one of the main factions, the General National Congress (GNC), did not sign on, objecting to key elements of the agreement for not getting enough share of the power. Leon correctly stated: "The initial agreement is a first step in a long and challenging course to bring stability and order to this country."

The agreement calls for establishing a government of national accord for one year with the possibility of extending it for another. The legislative body is to be made up of the House of Representatives from Tobruk, while the ministerial cabinet is to be headed by the Prime Minister and two deputies with full executive powers. The plan also calls for a consultative Supreme Council of State, a Higher Council for Local Administration and a Council for Reconstruction.

One of the key players for the success of this accord is House of Representatives representative to the talks, Dr. Abu Bakr Buera. His leadership and negotiating skill were crucial to securing support for the accord from the fractious House of Representatives. If stability is to be brought back to Libya, the right leaders must emerge and play an important role in bringing seriously divided Libyans together and taking decisive actions. One such promising leader is Dr. Buera. He fell only one vote shy of being elected president of the House of Representatives that was formed in May of last year. He holds considerable influence and has strong support among various political groups within the House of Representatives. Dr. Buera founded the Federalist movement in 2011 during the uprising that toppled Gaddafi. The movement quickly gained a strong following in the eastern part of Libya, marginalized for decades under Gaddafi. The region, called Barqa, was once one of three states when Libya gained independence in 1951. The federal system continued until it was abandoned in 1963 under a new constitution. Despite the eastern region's contributing over 70 percent of oil revenue, its share in the development budget was kept very low by Gaddafi as punishment for its opposition to his rule. Gaddafi's oppressive tactics were applied more harshly to this region, leading to radicalization of many of its youth, support for Al Qaeda and the rise of terrorist groups such as Ansar Al Sharia.

Buera: Will of Libyans Should Decide; Centralized, Decentralized, Federal, or Districts - All Options are Acceptable

Dr. Buera advocated federalism as a system somewhat similar to the United States, Germany, Italy and other countries with decentralized systems. Other regions in Libya were suspicious of the system, fearing that the objective of the Federalists was to monopolize oil revenue, 70 percent of which came from the Barqa region. To allay their fears, Dr. Buera declared that the issue of federalism should be resolved within the new Constitution now under drafting. A national Constitutional Commission was elected late 2013 and started the task of drafting a new constitution in February 2014. The Commission has come under strong popular criticism for its slow progress. Dr. Buera sees that whatever the people vote on in the draft constitution will be respected as the will of the people, whether they vote for a strong central system or a decentralized with three federal states along the lines of the 1951 constitution or more districts. Federalists did not boycott the elections of the Constitutional Commission and won 10 seats out of the 60-member Commission (seats were reduced to 53, due to boycott by Amazigh, Tabu and Twareg minorities that collectively held six seats in the quota system, along with one seat for the city of Derna that could not hold elections under the complete control of Al Qaeda). Derna was the first city in Libya to be controlled by Al Qaeda and earlier this year declared its allegiance to the Islamic State (ISIS). A few weeks ago Al Qaeda followers rose up and forced ISIS followers out of the city but only as far as nearby mountains and caves. 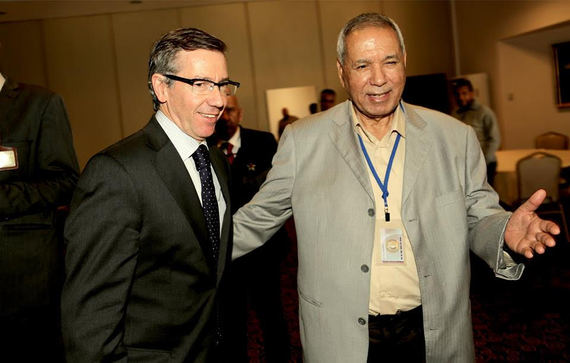 Back in May 2014, the GNC, whose term had expired earlier in February, came under strong popular pressure and conducted national parliamentary elections. The main political groups controlling the GNC, the Muslim Brotherhood and another bloc controlled by former Al Qaeda members and radicals, fared poorly in the elections. Rather than concede the results, their associated militias took control of Tripoli and the western area after bloody and destructive assaults - collectively called Operation Libya Dawn - that lasted for weeks, damaging and shutting down Tripoli International airport and nearby fuel depots. The war forced evacuation of the U.S. Embassy as well as most other missions. After taking control of Tripoli, Libya Dawn forces moved systematically and ruthlessly to bring other cities in the region under their control. Their acts of revenge and against cities that resisted their control extended to killing of leaders, imprisonment and torture, burning and destruction of property, forcing tens of thousands to flee their homes and escape to nearby Tunisia or became internally displaced. The fighting forced the elected and internationally recognized House of Representatives to flee to the far eastern city of Tobruk, under the protection of the forces of General Khalifa Hafter, who himself had in May 2014 launched Operation Dignity targeting Benghazi's Islamist militias of Ansar Al Sharia. The House of Representatives formed a new government located in the city of Albeida. To give itself legitimacy, Operation Libya Dawn hastily reconvened the GNC with less than half of its original members and appointed a so-called National Rescue Government in Tripoli but failed to get any international recognition. By August 2014, Libya became de facto split into two main regions with two Congresses and two governments. The UN embarked on an intensive effort to bring the two factions together to share power and form a unity government.

Battle for Benghazi, Emergence of ISIS in Libya and Disarmament of Militias

Absent from the UN-sponsored talks were the militias who hold the key to power in Libya. The picture in Libya was complicated even further by the battle for Libya's second largest city, Benghazi, where fighting raged since May 2014 between hastily reassembled remnants of the Libyan Army, led by General Khalifa Hafter, and Ansar Al Sharia, the powerful radical religious group responsible for the assassination of former U.S. Ambassador Chris Stevens and four other Americans on September 11, 2012. After a year-long bloody and destructive campaign, the radicals were largely evicted from the city, but over the past weeks they received reinforcements of weapons and men both from within and outside Libya. They continue to terrorize residents of the city, randomly firing rockets and missiles and causing civilian casualties. Even more ominous was the rise and declaration of ISIS, which now controls the central city of Sirte, home of Gaddafi, along with about 150 miles of coastal area on the Mediterranean, threatening the oil export region as well as Europe. Last February, the group staged a chilling beheading of 28 Egyptian workers.

The fighting in Libya has caused a growing refugee crisis within the country and into other countries in the region. The number of displaced people increased this year to more than 434,000, according to the UN's refugee agency. This is a humanitarian crisis for a country of six million. In Benghazi alone there were 19 casualties and over 80 injuries, some very serious, over the past week alone. Besides physical casualties, there is no telling how much psychological damage that may have lasting effect for generations which has been caused by shelling and displacement, especially to the very young and vulnerable.

Lacking a strong central government and army, Libya has become a safe haven to thousands of terrorists, a center for illegal weapons trade and drug mafias. Government of National Accord in Libya -- A Goal in the Interest of All Libyans

The agreement reached on July 11 by no means guarantees an end to fighting in Libya. The GNC is yet to endorse it, but the door was left open for them to return to the table after the Eid break with veiled threats of sanctions and punishment to their leaders. Detailed appendices to the 69-article agreement are yet to finalized. But it is a big first step in the right direction. The alternative to dialogue is more bloodshed and disintegration of the country. Three factors add important impetus to the political agreement: the deteriorating economic situation, the strength of the militias and the rise of ISIS. The economic outlook for Libya is very grim. Oil exports are the main source of revenue, accounting for about 95 percent of government income. The government is by far the biggest employer in the country with over 1.5 million people on its payroll, a quarter of the population. Oil production has dropped from over one million barrels per day to fewer than 400,000, and the drop of oil prices to half of their value a year ago makes the situation even worse. The central bank has to dip into its dwindling foreign reserves to meet payroll.

The militias number over 200,000, with vast arrays of weapons and ammunitions. An effective political settlement would weaken or end their power and sources of funds. It may also hold them accountable for financial gains and crimes they committed against civilians, including imprisonment, torture, killing and destruction of peoperty. No political solution can succeed in Libya without stripping militia leaders of their power and integrating their members into security forces or gainful employment created by a developing economy.

Libya has been under arms embargo since 2011. The EU and U.S. have all but ruled out military action against ISIS and rejected lifting the embargo to arm the Libyan army to fight ISIS. There has been hints of lifting the arms embargo after a unity government is formed. ISIS has taken advantage of the power vacuum in Libya, its open borders and lack of any action from the West to strengthen its presence in the country and expand its control.

The success of the proposed government of national accord for Libya will to a great degree depend not only on active foreign support from governments and institutions of the UN, U.S. and EU, but on Libyans choosing the right leaders for their government. New leaders with vision and organizational skills must be chosen if this unity government is to succeed and offer hope to put Libya back on the road to stability and development. Dr. Buera can pick up the torch, for others to join.