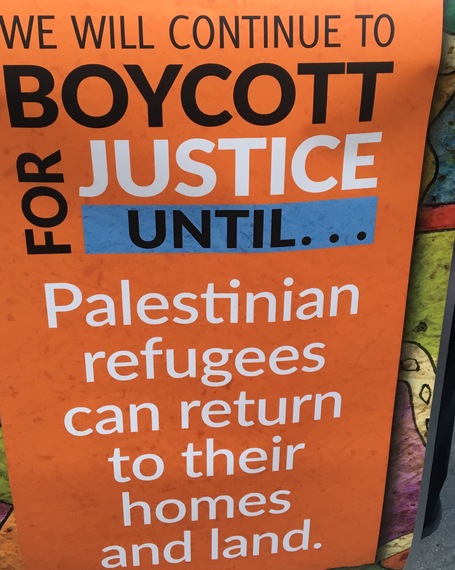 This past week, hundreds of New Yorkers from different communities and organizations stood strong for justice and protested Governor Cuomo's unconstitutional executive order requiring NY State to create a blacklist and divest from institutions and corporations supporting the Palestinian-led boycott, divestment, and sanctions (BDS) movement. The three-part call for BDS, as put forth by the Boycott National Committee representing well over 150 civil society organizations, includes "ending Israel's occupation and colonization of all Arab lands and dismantling the Wall; recognizing the fundamental rights of the Arab-Palestinian citizens of Israel to full equality; and respecting, protecting and promoting the rights of Palestinian refugees to return to their homes and properties as stipulated in UN resolution 194."

One of the many signs, "We will continue to boycott for justice until Palestinian refugees can return to their homes and land," speaks to the heart of the issue. The call for the right of return for Palestinian refugees grows out of the reality of the Nakba (catastrophe in Arabic), the expulsion and forced displacement of approximately 750,000 Palestinians from their homes and land that began with Israel's creation (between 1947-49) and continues to this day. The right of return for Palestinian refugees is therefore critical to the call for BDS, and for justice. (There are countless sources, but one project I have been part of, Facing the Nakba, has created curricula and resources to learn more about the history of the Nakba and how it is ongoing today-- https://jewishvoiceforpeace.org/facing-the-nakba/)

These principles of the BDS call, reflected in many of the signs at the protest, are rooted in a commitment to freedom, justice, and equality. An attempt to punish those who support BDS is an attempt to punish seekers of justice. Shameful is not nearly a strong enough word to describe the Governor's behavior.

As we know so well from history, communities come together in the most powerful of ways to fight for justice and for dignity. That's what is happening now. Despite attempts by those promoting occupation and repression, the movement for justice in Palestine will not be deterred.