The right to vote is an important part of being an American citizen. Despite this fact, in 2011 several state legislatures have introduced bills that would make it harder for you to exercise your right to vote. This effort is unprecedented in scope, well-coordinated, and carefully targeted. African Americans, Latinos, Asian Americans, Native Americans, students, working women, seniors, and immigrants of all colors will be disproportionately affected. What we're facing is the most aggressive attempt to roll back voting rights in over a century.

Today, voter suppression takes many forms, including attacks on early and Sunday voting to make voting harder for working people; photo ID requirements for voting and registration that introduce the first financial barrier to voting since the poll tax; and the same racially motivated ex-felon bans. I personally was affected by this.

When I was released from prison after serving 12 years under the Rockefeller Drug Laws, I had no clue about my eligibility to cast a vote. When I went to register to vote I was shocked when they informed me that I had to wait until I was released from parole. I felt the pain of felony disenfranchisement since it seemed I was being further punished for my crime. I saw my Queens neighborhood deteriorating around me but was powerless to do anything about it by casting my vote. I was elated when, after waiting for five years, I got off parole and was able to cast my first vote since being released from prison. I felt then like I was fully welcomed back by society as a citizen.

Millions of people convicted of felonies will be barred from voting in the upcoming presidential election. This is a mind-boggling number of people who will be disenfranchised. The most alarming aspect is that many of them are eligible to vote but don't know it.

In New York State, if you are convicted of a felony, you automatically lose your right to vote. According to the Legal Action Center, your right to vote is restored once you have completed either parole or your maximum sentence. If you are on probation, your right to vote is never taken away. But most ex-felons do not know this and do not vote. This amounts to hundreds of thousands of individuals who incorrectly assume they are banned from voting for life.

You may wonder why prisoners are not notified of this right. I think the problem lies in the voting system itself. In New York it was discovered that one-third of election officials did not know that individuals on probation could vote. To fix this problem, states must better train election officials and eliminate complicated registration procedures and paperwork to make sure criminal defendants are fully informed about their voting rights.

Exercising the right to vote should be an important part of a prisoner's rehabilitation. It's an act that makes one feel whole again following years of losing those rights. If, through voting, individuals can become involved in the political process, they have a much better chance of fully integrating back into society.

Benjamin Todd Jealous, the current president and chief executive officer of the National Association for the Advancement of Colored People (NAACP), says in a letter targeted to voters:

Our nation is in the midst of the most aggressive attempt to roll back voting rights in over a century. This effort is unprecedented, it is coordinated, and it is targeted. As you are aware, this year alone, two-thirds of state legislatures introduced and/or passed laws aimed at suppressing our vote. These attacks on our voting rights undermine the very heart of what the NAACP and our partners have fought for since our founding. For those of us who have worked to restore the voting rights for the formerly incarcerated, this is an all too familiar tactic to further marginalize not only people with criminal records, but entire communities of color, the poor, the disabled and other disadvantaged people across this country. Throughout history, the target has been the voting rights of formerly incarcerated individuals. A century ago, the target was the voting rights of Black voters and other voters of color. Today, the target is the voting rights of Black voters, Latino voters, Asian American voters, Native American voters, as well as students and young people, women, senior citizens, people with disabilities and immigrants of ALL colors. This year the NAACP will launch a multi-year initiative aimed at raising national awareness of these attacks.

On December 10th, U.N. Human Rights Day, NAACP will lead a coalition of more than 100 ethnic, community and faith organizations in a rally in New York City for voting rights. In solidarity with the New York rally, NAACP units nationwide will encourage communities to mobilize around voting rights, and will organize events across the country in support of voter rights. A march is planned from the office of the Koch brothers -- who are funding many of these anti-voting rights measures -- to a rally at the United Nations headquarters.

Please join me along with the NAACP on Saturday to stand for freedom and protect our right to vote.

PHOTO GALLERY
The Vote (This piece was painted when I was in prison)
Download
Calling all HuffPost superfans!
Sign up for membership to become a founding member and help shape HuffPost's next chapter
Join HuffPost 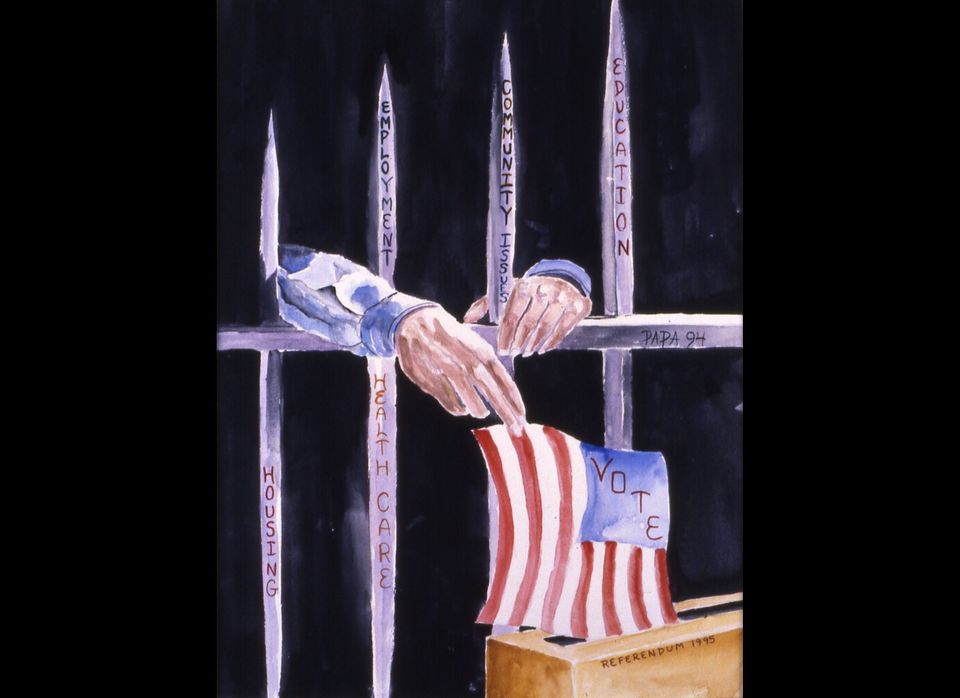