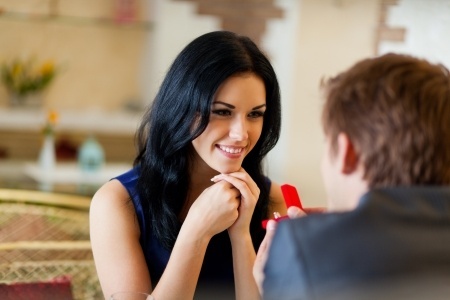 I'm sitting in a new Starbucks (new to me) and I get to that happy place -- coffee perfectly doctored, laptop fired up, posture adjusted and fingers ready to fly -- when I notice a rather attractive older man entering the doors. He glances over at me and smiles, then goes about his ordering. He rounds the counter to that little spot where the drinks get dispersed to their rightful owners, pops a lid on his brew, swivels around and walks right up to my table.

"Hello," he says, with a nice dose of eye contact, "I've never seen you around here..."

"I thought I'd try a new coffee shop to write in, " I say. "Keeps it interesting."

"Well I hope you come back," he says with undeniable genuineness. "This place is much brighter with you in it. I'd drink coffee here every day if I knew a woman as beautiful as you would be in the room."

Wow. I'm blushing. Introductions follow and a few pleasantries, and then his enthusiastic farewell of "Have a wonderful day!" We didn't exchange numbers as he was at least a decade older and I think he sensed we were mismatched, but I was touched by the interaction. Of course I was flattered, but more than that, I felt admired, honored almost. I left the coffee shop a few hours later thinking, "Now that's how you approach a woman."

During another encounter I had a few years ago at a quaint little bookstore/coffee shop in Boulder, Colorado, I was relaxing enjoying my coffee when I noticed an exotic-looking, bearded man in line purchasing a book. After he finished, he turned around, walked up to my table, and promptly set the book he had just bought down on my table. He smiled and said, "This is a good one, I think you'll really like it," and then proceeded to take a seat at the far end of the shop. After that brief moment of shock that happens when a stranger breaks into your personal bubble, I opened the book and noticed a small note sticking out of the inside cover that read: "There is an ancient Japanese saying that a man can stare at a cherry blossom tree for a thousand years and never know true beauty. I think if he were to gaze into your eyes for just a moment, he would finally understand what beauty is."

The book was Way of the Peaceful Warrior and I was officially impressed. His creativity got him an introduction, a few hours of intriguing conversation and a dinner date. He was flattering without being forceful. Forward yet kind.

It seems that our culture has become overly obsessed with convenience and instant gratification, so much so that the crucial first steps of intelligent flirting get bulldozed over. It's all too easy to go from initial attraction to "hooking up" thanks to dating apps and the abandonment of the concept of courting. The truth is, we want you to charm us, captivate us and let us know that our presence has changed the temperature in the room. I'm not saying that I wouldn't give someone a chance who approached me in a simpler, less creative manner, but flattery combined with a little vulnerability goes a long way.

Also, I think originality is key when engaging the fairer sex. We want you to speak to us with a high degree of respect, to look us in the eyes and say something unique, to concoct a string of words constructed just for us. It doesn't have to be elaborate or especially deep, but it's got to be polite, positive and genuine. I've been equally intrigued by straightforward, uncomplicated lines, for instance: "It was really nice talking to you, would you mind if I called you sometime?"

Here are a few tips that might help you go from noticing a beautiful woman to spending some quality time with her:

•Don't approach us with a purely sexual line. While we do want to be noticed for our unique physical beauty, complimenting only our body is the opposite of classy. I once had a man tell me he "appreciated a woman who takes care of herself" -- borderline condescending.

•Don't walk up to us if you are too nervous. Sweating buckets, shaky hands, etc. will only make us uncomfortable. Cool confidence is appealing and inviting.

•Don't go for it when you're drunk, biggest turnoff possible.

•Location makes a big difference. It's almost expected to be approached at a bar, but it can feel like you're just trying to hook up and any attractive female will do. On the other hand, bookstores, coffee shops, grocery stores, the bank, the gym -- all places where we'll be pleasantly surprised to get noticed.

•Do not go for the ask right away. We are naturally suspicious at first, so make a point to carry on a conversation with substance for a bit before taking that leap. It says a lot that you can be articulate and are interested in getting to know us, plus we are more likely to say "yes" if you establish some degree of comfort first. We'll run at the first sign of pushiness.

•When you are ready to go for the next step, don't ask us out to dinner; it's too much of a commitment right off the bat. Suggest that we meet up for a drink, grab a cup of coffee, something short where we can get to know each other without pressure.

•Approach us within a reasonable amount of time. An interesting man can turn into a stalker quickly if a few bouts of eye contact morph into a staring session with no attempt to engage.

•Eye contact and a smile will up your chances significantly.

I'll leave you with a third and final interaction that still makes me smile. I was at the gym one afternoon, doing my thing on the leg press when this man walks right up to me and says, "Hi." My initial reaction was discomfort as I relish my workout time and don't expect to chit-chat. However, what he said after that really made my day:

"I don't normally do this, but I had to come over and meet you. You seem like a really driven and attractive person, and I was wondering if you might let me take you out some time. I really love your short hair, you don't see many girls wearing it like that and I think it is very striking on you."

Boom, floored. He was not the most attractive man, a little shorter than I typically like, and I probably wouldn't have picked him out of a crowd, but his boldness was incredibly alluring. His words seemed so honest and spontaneous that I didn't even mind him asking me out right away. He just laid it all out on the table without being rude or overeager, and it got him my phone number.

The point is, women appreciate a man who is self-assured enough to approach us yet humble enough to extend gracious compliments. You don't have to be ruggedly handsome and have six-pack abs, and you certainly don't need a book of pick-up lines (we can spot those a mile away). Act natural but put a little thought into it. Be assertive, not aggressive. Make us feel special somehow, and be sure to extend some sort of kindness our way. I have this recurring vision of being approached by a tall, dark, handsome man carrying a tall, dark, organic cup of coffee and a croissant over to my table. If I keep on writing in coffee shops, you just never know...