As I stare out at the 9/11 Memorial in New York City, I think back to interviews conducted with American D-Day survivors. In some of them, veterans have been accompanied to the specific beaches on which they landed in 1944 and asked to recall those fateful days. The cameras often focus in tight on the eyes, which stare fixedly at clean sweeps of sand, but see something bloodier, foul and murderous. Through these faraway gazes, aided by gritty archival footage, we get a sense of the enormity of what happened. We grapple with emotions we believe we have felt -- fear, terror, ferocity, anger, despair -- but can't really comprehend in that indescribable context. 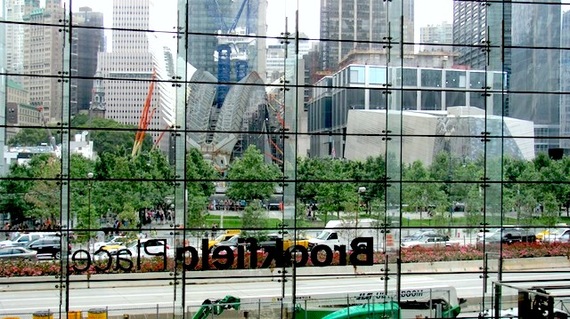 I am not a hero of either World War II or 9/11, but today I imagine a camera closeup of my eyes, looking out at a downtown Manhattan plaza buzzing pleasantly with halter-topped and shutter-happy activity. That's what's there today, but what I see isn't as sunny. Although a native-born New Yorker resident in the city in 2001, I was out of the country that portentous September day when jet-fueled hatred left behind smoldering devastation and tempers.

Less than a week later, though, after the first flight open to me, I was back at home, staring at The Pile -- the heap of rubble and debris reaching five stories above ground and many more below -- the backlit silhouette of the unmistakable ruined exterior support columns from the south tower etched into memory, the dust of things I dared not dissect a visible manifestation of the stink that plastered everything. 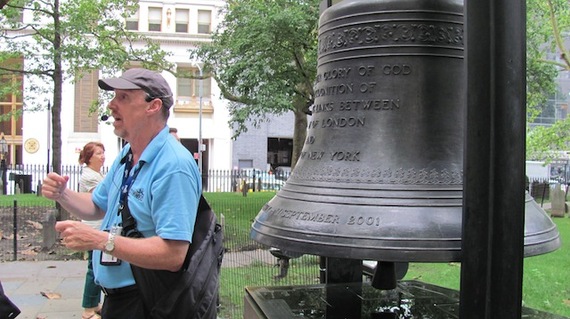 Our guide, Michael Dillinger, talks about the Bell of Hope at St Paul's Chapel in New York City. Photo courtesy of Ethan Gelber

Although I have stood at the edges of Ground Zero many times since then -- moving to and from other places, dropping visiting friends at its fringe -- today, not quite 13 years later, is the first time I have stepped into the shadow of obliteration. Have I been avoiding it? Not consciously. Even before 2001, I had little reason to be in the area. But perhaps I have always found excuses for not peering in on the construction or sought out ways of not remembering dark days.

So at long last, compelled by curiosity about how the site is presented to people who might not be as awkwardly familiar with it as I am, I elected to join a 2.5-hour Ground Zero walking tour. Set to circumnavigate the new and emerging World Trade Center before plunging into the memorial mix, the tour is designed to put the site in its Financial Center context via its history, its buildings (past and present) and reminders of some of the people and events from 9/11. I got all that and more.

Too Easy to Forget

The most compelling of the intertwined themes juggled by our able guide, Michael Dillinger, was the importance of not forgetting. Hackneyed though the concept might be, it was given great gravitas by Dillinger, who often spoke personally and poignantly about his connections to the Ground Zero site and those terrible days in 2001. 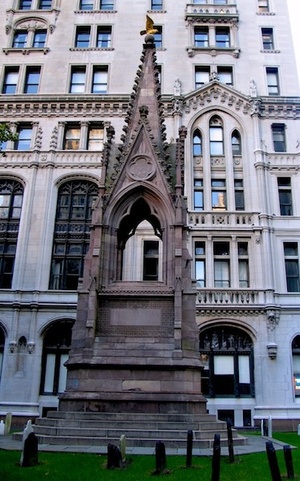 It wasn't superficial banter about memorialization, though, but a cogent appeal for actively remembering to remember. No, that's not redundant; it cuts to the quick about how far many of us are from understanding the very near past, let alone more distant times.

For example, one of my Ground Zero tour's earliest stops was an elegant and largely unnoticed, weathered, pink-stone monument at the northeast corner of the grounds around Trinity Church, that world-famous place of worship marking one end of Wall Street. Most passersby, especially those who frequent the area, have never focused on the pedestal-mounted pointed structure -- like a disembodied steeple -- topped by a gilded bird.

This is, believe it or not, a memorial to the unknown heroes of the American Revolution, especially the thousands who suffered and died in ghastly conditions on British prison ships moored off Manhattan.

As an avid student of history, I was struck not to have read or heard anything about the nearly 8,000 nameless martyrs (almost one-third of the estimated 25,000 American lives lost in that war) who wasted away aboard the HMS Jersey and other hellholes, and never received proper burial. (Read more about the gory details and another Prison Ship Martyrs Monument in Fort Greene Park, Brooklyn.) What was once a national tragedy is now barely a recollection.

We also paused by the New York City Police Memorial in Battery Park City, dedicated in 1997 to the memory of fallen NYC police officers. Water, a central feature of the monument, was neither flowing nor pooled at this disregarded place of remembrance. Attracting far larger crowds these days in its location directly across from Ground Zero was the FDNY Memorial Wall, dedicated to the 343 members of the NYC Fire Department and one volunteer firefighter who died on 9/11. 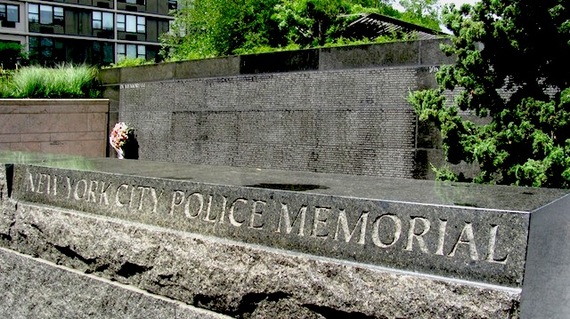 Then there is the once-busy but now-overshadowed Eleven Tears Memorial reflecting pool, a serene tribute to the 11 employees of American Express who were killed on 9/11. It appears to draw far fewer admirers than the unbefitting Jeff Koons sculpture squatly plopped two blocks away in Silverstein Family Park.

There are of course other places of note, very prominent among them being St. Paul's Chapel, the only original Colonial-era church in Manhattan and location of the private pew where George Washington prayed. The chapel, miraculously unharmed on 9/11, served as a refuge and comfort station during the months of rescue and cleanup following the attacks. It now hosts a moving "Unwavering Spirit" exhibit of 9/11 artifacts. 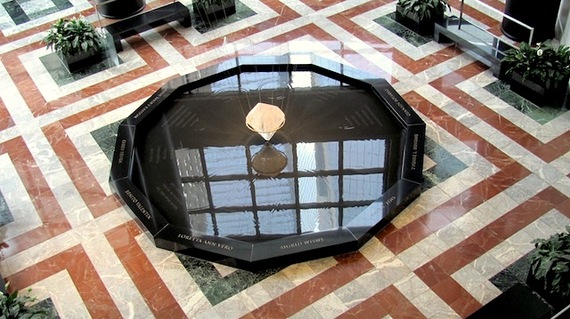 And not to be omitted is "Double Check," the life-size bronze statue by John Seward Johnson II of a businessman checking his briefcase while seated on a bench in Zuccotti Park. "Double Check" is a lucky 9/11 survivor and a de facto shrine representing the everyday people who perished on an otherwise normal day in September as they were just trying to make ends meet.

Skirting the 9/11 Memorial, Michael Dillinger, our guide, eased us through all of this. We learned about the area's lost past, rocky present and hopeful future, our thoughts regularly ushered by Dillinger to contemplate the meaning of remembrance. 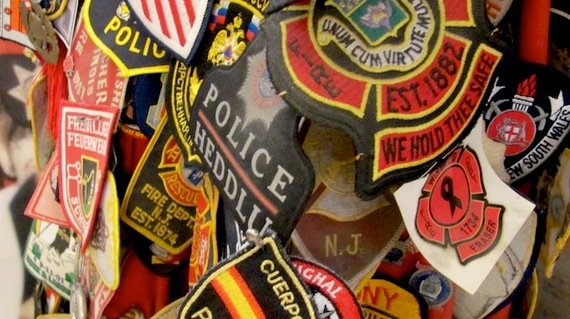 As recalled in the "Unwavering Spirit" exhibit at St Paul's Chapel in New York City, police and firemen from all over the world helped clean away the debris. Photo courtesy of Ethan Gelber

He recalled the tireless energy devoted to search and rescue, like that of the crew of the John J. Harvey, which pumped water from the Hudson River and provided the only means of fire fighting at Ground Zero until hydrants were restored three days later. And that was just one boat in a ragtag fleet that undertook the largest water evacuation in history -- more than half a million people lifted from the sea walls of lower Manhattan.

Dillinger resurrected the lives of individual heroes of 9/11, like Father Mychal Judge and Rick Rescorla, notable for their composure, acts of bravery -- two recorded among thousands we'll never know -- and their ultimate sacrifice.

We reflected on the stories of Father Mychal and Rescorla from a broad window in Brookfield Place overlooking the southwest corner of the 9/11 Memorial. It is there that I thought of the World War II veterans and what their minds saw when they studied the Normandy beaches of today, betrayed by their haunting faraway gazes. Similarly, what I was seeing was not what Dillinger saw, nor was it anything like what the other sobered out-of-state tour participants saw. 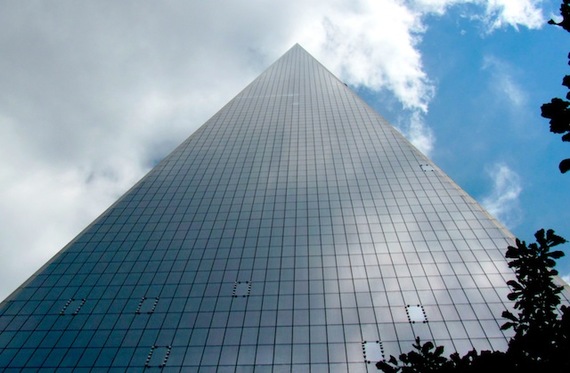 Seen from some angles, Freedom Tower (One World Trade Center) looks like it tapers to a point. Photo courtesy of Ethan Gelber

But does it matter? Does my gritty horror matter any more than the clean sweep of the 9/11 Memorial, the crisp reflective glass of One World Trade Center (Freedom Tower), the skewed bulk of the 9/11 Memorial Museum and the saurian menace of the incomplete Transportation Hub?

Isn't what matters most that we all remember? That we remember not just the drama and the tallies of lives lost, but the individual moments and people. And the efforts by those who love them to create lasting temples to their memory.

These are the thoughts I took with me to the Memorial itself, where Dillinger politely and appropriately left us a few moments alone. I don't wish to share my impressions of that particular moment in time, a visit long overdue. The 9/11 Memorial is simply a place to which you must go, to which you should take your private thoughts or closest confidants.

But I will say this: I couldn't help wondering how many years will pass before the memories and purposes of our newest homages will be lost. How long will it be before these sites, so fresh and affecting to us today, become like the forgotten Martyrs Memorial Monument near Trinity Church -- little more than purposeless and overlooked architecture, a national tragedy turned barely a recollection?

Dillinger, who is also Vice President of the Guides Association of New York City, commented to me after the tour that "I lead tours in NYC because I want people to fall in love with NYC." Sometimes the quickest way to inspire love is to show vulnerability. And even in a city like New York, a place hardly known for its humility, Dillinger taught us all, even a native like me on a tour in his home town, that time taken to remember and understand a moment of fragility is a big step in the right direction.