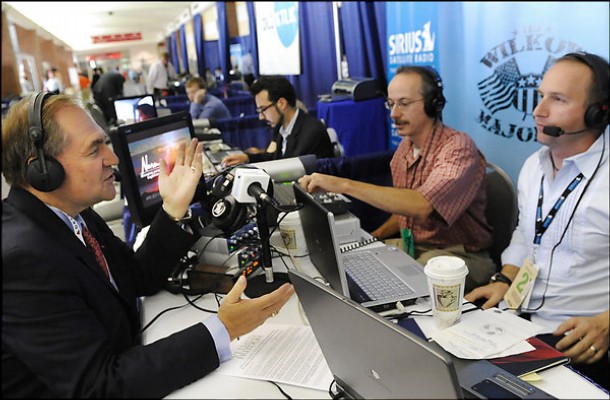 In the election of 2008, Senate and House Democrats virtually swept their Republican opponents and appreciably increased their majorities, while Barack Obama won the presidency on his message of hope and change. The takeaway? Voters were fed up with the status quo; tired of partisan politics and all the nastiness and inertia that crippled Washington. But did Republicans get the message? If listening to conservative radio is any indication, the right has completely missed the wake-up call.

The crop of right-wing talking heads is quite a shameful bunch. Remarkably, after their precious party got its ass kicked on November 4th, they're engaging more than ever in the same rude, divisive smear tactics that brought them down just three months ago. They act like a bunch of sore-losing spoiled brats who only seem able to express themselves through derisive name-calling and ad hominem attacks. They cloak themselves in God and country yet are so sexist, racist, homophobic, xenophobic, intolerant and polarizing that it would make Jesus' and the Founding Fathers' heads spin.

These hate-mongers are also delusional, as if they've been living in a bubble for the past eight years. They still cling to the standard GOP rhetoric about how giving tax breaks to the wealthy--"those who create the jobs," as Sirius's Andrew Wilkow insists--will save the economy despite the fact that this strategy has so clearly not worked. They claim, as does Fox's John Gibson, that "Bush won the war," and call anyone who disagrees with them "morons." They ridicule the climate change movement because we've recently had sub-zero temperatures, as if global warming is supposed to mean an end to Winter. They claim that America has shifted further to the right, despite every election and polling statistic proving otherwise. They suffer from classic projection, claiming, as does WABC's Mark Levin, that "libs are hate-mongers and propagandists...who reject evidence and reason." Sounds more like Republicans he's describing, doesn't it?

What it all boils down to is that their message of cynicism and hate has been soundly rejected by voters. They're like the angry, resentful high-school nerds who didn't get invited to the cool party. So they bash and trash. Makes them feel better. But it only serves to keep them further on the outside looking in. And it's killing them.

So who are these evil-doers of the airwaves? There's Mike Church, the self-proclaimed "King Dude," whatever the heck that means. A more appropriate moniker would be "King Whiner." This guy is one of the nastiest, mean-spirited, bigoted and ignorant spinheads there is. He calls Democrats "commie lib bastards" and regularly spews a littany of derogatory pet names for those he so clearly despises: "Nazi" Pelosi, "Wrong" Emmanual, Diane "FrankenFeinstein," Katie "Whoric," Claire MamaCaskill" and "Franklin DelanObama." Of our new president, Church "wishes that Obama becomes an absolute undeterred miserable failure." Nice. Church is a pathetic Rush Limbaugh-wannabe who sounds as if he spends half his days obsessively studying his obnoxious blowhard hero's speaking style and mannerisms.

Then there's Wilkow, the Sean Hannity-wannabe who, like Church, has thankfully had his partisan blathering limited to Sirius Satellite, radio's equivalent of Siberia. Wilkow is such an angry, resentful guy that he has no idea how embarrassing he comes off when he bashes talk show hosts with national fame and major network programs. He claims to be above the fray and repeatedly promises not to engage in "snark and sarcasm" but then seconds later trashes people like Jon Stewart and Rachel "Meaty-Fingers" Maddow. Pretty safe to assume he disparages them so often because he is incredibly jealous of their mainstream accomplishments. I cringe for him when he rants about all the "network opportunities" he's been offered but has turned down. Yeah, why host the Oscars or have a nightly program on MSNBC when you can do the morning show on Sirius?

Wilkow also shamelessly crucifies the Obamas, declaring that Michelle looks like transvestite entertainer RuPaul and that "it's just a matter of time before Barack Obama cheats on his wife with one of those P.O.A. (piece of ass) interns" running around the White House. He has a general disdain for "intellectuals," and defines them as "someone who sips fancy wine with his pinky out." That's a pretty narrow view of people who have depth of knowledge and intellectual curiosity. I recently emailed Wilkow to ponder how awful his childhood must've been for him to harbor such hostile, narrow-minded, racist views of anything or anyone with a brain.

Next on the list is Mark Levin, who screams and yells like a shrill schoolmarm. If ever there's a radio host who seriously needs a sedative it's Levin. Obama's officially been in office four days and Levin's already deemed him "a failure." Nothing like giving our new president a chance.

On Friday's program a listener challenged Levin to explain how the country's still tilted to the right despite the electoral college and popular vote results and increased House and Senate majorities for Democrats. Like a cornered rat with his back to the wall, Levin unleashed a vicious diatribe against liberals about how they hate their country, love taxes, are faithless and support terrorism. Hey Mark, we're sorry we let our facts get in the way of your outrageously small opinions. Levin also has a thing for Maddow, referring to her as Rachel "Madcow." He calls our new Secretary of State "Hillary Rotten Clinton, AKA Her Royal Thighness." What are we, in the eight grade here? And in an act of supreme hypocrisy, he ends each program--after vilifying everyone on the left--by playing ten minutes of "America the Beautiful" and other patriotic songs. Sorry Mark, the music doesn't make the man. You're a horribly mean-spirited myopic little bully who's about as truly patriotic as Timothy McVeigh. The bombs you drop are just not as lethal, but you have the same hatred for the establishment and for anyone who disagrees with your ignorant, bigoted views.

Stepping up a bit in recognition are Rush Limbaugh and Sean Hannity. Is there really anything left to say about the oxy-contin-addicted Limbaugh that hasn't already been said? Wait, I got it: he played the parody song "Barack the Magic Negro" on his show last year. The old bloviator even topped himself with that one.

Hannity's drive-time syndicated radio show and nightly television program make him and Limbaugh the grand-poobahs of conservative hate-speak. He and his listeners nauseatingly greet each other with "You're a great American" but together they'd strip liberals of their rights and freedoms and send them all off to Gitmo if they could...all while Hannity's theme song, "Let Freedom Ring," played in the background. Nothing like denigrating your fellow Americans while cozily draped in the flag.

Hannity also bizarrely still drinks the Bush kool-aid: "George Bush was principled and history will prove him to be a great president...at least he didn't sell his soul." No, but he sold ours.

Despite his outsider approach, it's the in-crowd that Hannity clearly craves. He was genuinely upset recently when he learned, on-air, that Obama held a luncheon for America's leading conservatives at the home of George F. Will. In attendance were the pillars of the right-wing's Fourth Estate, including David Brooks, Charles Krauthammer, Lawrence Kudlow, Rich Lowry, Bill Kristol and Peggy Noonan. Hannity was extremely offended over not having been invited. But what does he expect with his penchant for partisan hectoring and incendiary rhetoric. Hannity belonged at that table as much as Perez Hilton. With his ego terribly bruised, he accused Obama of "targeting wishy-washy conservatives." But oh how he wishes he were one of them.

What Hannity doesn't get is that it's a new day in Washington. In American politics. Obama's lunch mates, whatever their viewpoints, comprise the Republican intelligentsia; they're creative, curious thinkers who make Hannity look like the debate team's waterboy. They're the kind of people Obama's wisely enlisting in his quest to bridge the partisan gap, help spread his message, and help him ultimately get things done. Hannity, like Limbaugh, Levin, Wilkow, Gibson, Church etc, offer nothing constructive. Nothing productive. They're yesterday, and as their hardline conservative bases get smaller and smaller, so too shall their voices become more and more obsolete.

And that's the whole point. The gathering at Will's house was another "cool kid" party that Hannity and his angry, polarizing cohorts weren't invited to. They should get used to it because, in this new Obama spirit of bi-partisanship, where hope and change rule the day, there's gonna be plenty more parties like this where their polarizing little cold, wet noses will be pressed up against the window.

There is at least one redeeming value to all these right-wing rebel-rousers: they've given me a newfound appreciation for Fox's Bill O'Reilly, who by comparison actually does sound--and I can't believe I'm saying this--fair and balanced. Wow, there is hope for us all yet....