The picture in question was of a matted, decayed albatross corpse. Its belly had rotted open, revealing a recycling bin of plastic lighters, bottle caps and tangled furls of nylon. I was trawling through Captain Charles Moore's blog, entirely by accident, which relayed his findings on his ship the Algalita which in turn was trawling through a plastic soup of waste, in an area of the globe called the North Pacific Gyre.

This gyre is one of five in the world, a confluence of oceanic streams and weather systems, which merge as a slow moving maelstrom. Much like sediment is deposited on the bank of a meandering river, the cargo of these oceanic streams is unloaded in these areas, to form a vast column of sediment from the floor, to the ocean's surface. And for the last 150 years, since the invention of plastics, this cargo has comprised mainly of plastic waste, anything from tractor tires, to bottle caps, fishing nets to yellow bath time ducks. My dismay increased as I read on. This particular gyre is estimated to be around twice the size of Texas, stretching nine kilometers, to its deepest trench. And the real atrocity was not in the miles and miles of bobbing plastic, nor the knotted nets of crap bristling just below the surface, but the tiny bits of plastic, invisible to the naked eye, that choke the water. Called mermaids' tears by those that know them, or slightly less poetically, nurdles, they are the result of plastics inability to decompose. Plastic stands out as a material because it exists outside of the carbon cycle - when chemicals are fixed into plastic, it is extremely difficult to coax them into other forms. As such, plastics don't rot naturally, but degrade, cracking under the sun and salt to smaller and smaller pieces. They do enter a cycle of sorts, being ingested by fish which are in turn eaten by humans. The past few decades are the first in human history for mothers to be feeding plastics to their babies, via their breast milk.

Now all this is abhorrent enough, but the thought hadn't struck me to develop it into a story, until I found this picture of an albatross. Brought to its end not by a cross bow, as in Coleridge's tale, but by a repeatedly mistaking bottle caps for shrimp, and taxiderming itself from the inside out. It is very hard, in England, to grow up without ingesting the imagery of the Ancient Mariner- it has entered our lexicon, as sayings (he's got an albatross around his neck, or water water everywhere...) it is taught in schools, it's mentioned in Mary Shelley's Frankenstein and Iron Maiden even wrote a 13 minute rock epic which shares the poem's title. It's everywhere. So the image of the albatross caused not so much a thought, but a knee-jerk reaction, and I set to writing my version.

When I came to drawing the poem, I wanted to submerge myself, and headed back to my parents home in the dales of west Berkshire. This is original Tolkien land, about five miles from bucklebury ford, referenced in The Hobbit, and the setting for other famous British works about the country - Watership Down (about ten miles from my home) and Wind in the Willows, whose river flows through my village. And it was there I had my epiphany.

I had already been dipping my toe in the waters of British nature writing, falling in love at first glance with Robert MacFarlane's book, The Wild Places. This book opened up a seam in my head, and into it I poured Richard Mabey, Roger Deakin, Jay Griffiths and a load of American authors, such as Barry Lopez and David Abrams. Over the course of drawing The Modern Mariner, I really started to explore the woods of my childhood. Previously, growing up, the woods were places for secret things, fires upon which we placed deodorant cans and tinned goods, hiding behind trees as they exploded. We smoked our first cigarettes in the wood, kissed our first girlfriends. In short, being in the countryside was never really about being in the countryside. But suddenly, with new eyes, I started exploring the old haunts, armed with a new arsenal of wild flower books, sketchbooks, poetry and anything that spoke of the countryside. When I learnt for myself the names of trees, the wood became not just one entity, a green slush at the end of the fields, but a myriad network of individual stories and characters, whose fractal complexity was beguiling. I felt instantly that I had been missing out.

Rob's book was the catalyst to normalize rough sleeping - a misnomer if ever there was one. Opening your eyes by the dawn light on a hillside is by far the most comfortable way to wake. The book's climax and catharsis occurs in a bower of forty ash trees. This is a real bower, slap bang in the centre of Wales, planted and tended by the artist David Nash. I had come across his work whilst researching The Modern Mariner, and thought it might be a nice treat, when I got to that bit in the book, to go and draw it from life. So I took the train to north Wales, and spent a couple of days biking south to the little village where he lives. It was burning hot sunshine all the way, and by the afternoon on the second day, I was within 20 miles of my destination, and received a text. From his assistant. Saying he was too busy. So, in the middle of nowhere, I decided to make something else of the day, and turned to see a mountain in the distance. I climbed that mountain, and on its summit, it seemed inevitable that I should spend the night there. Even at that point, though, my stomach was grumbling, and so I turned on my heels, went down the mountain, bought some fish and chips, and raced back up the mountain to eat them cold. The night I spent on that mountain was unforgettable. The stillness and the silence penetrated me so gently that it lodged deep inside and hasn't left. It's where I go in my head during root canal surgery, or whilst invoicing clients. Watching the sun sink over Wales' largest mountain, watching the dark arm of the night sweep over the land below, touching the cottages and turning on their lights, and hours later, watching those lights blink off, as their residents went to bed. Listening to the sounds, the hoots, the bleats, the wind. Waking up in the morning, early, for a piss and returning to a warm hollow in the earth to sleep a couple of hours more. Through the course of the night, the mountain had turned from a cold, haunting place outside of human comfort, to a warm home. That transformation was, for me, the greatest blessing from the book, the gift I most value.

I'm back in London town now, working as an illustrator and storyboard artist, doing the occasional political cartoon for the newspapers. I'm writing my second book, using the early life story of woody Guthrie to tell a story of deforestation of the prairie grasses, which eventually led to the dustbowl crisis. London is full of parks and green spaces, but it also has some truly great forests and wild areas. I live at a point in east London, where oxford circus is equidistant from Epping Forest, where the highwayman Dick Turpin once hid out. It's a cathedral of beech trees and at the time of writing, parasol mushrooms, and it's where I go to have fires and sleep out. For this reason, I haven't missed the countryside, because the balance between lifestyles is what I enjoy the most. A lot of nature writing places man as the enemy, the intruder, the outsider, and this approach is understandable enough. But the writing that really gets me is that which places us not just within the landscape, but as an entity of the landscape, as simply another expression of the natural world. And there is a comfort in this connectivity that breeds a hope for the future.

PHOTO GALLERY
Rime of the Modern Mariner
Download
Calling all HuffPost superfans!
Sign up for membership to become a founding member and help shape HuffPost's next chapter
Join HuffPost 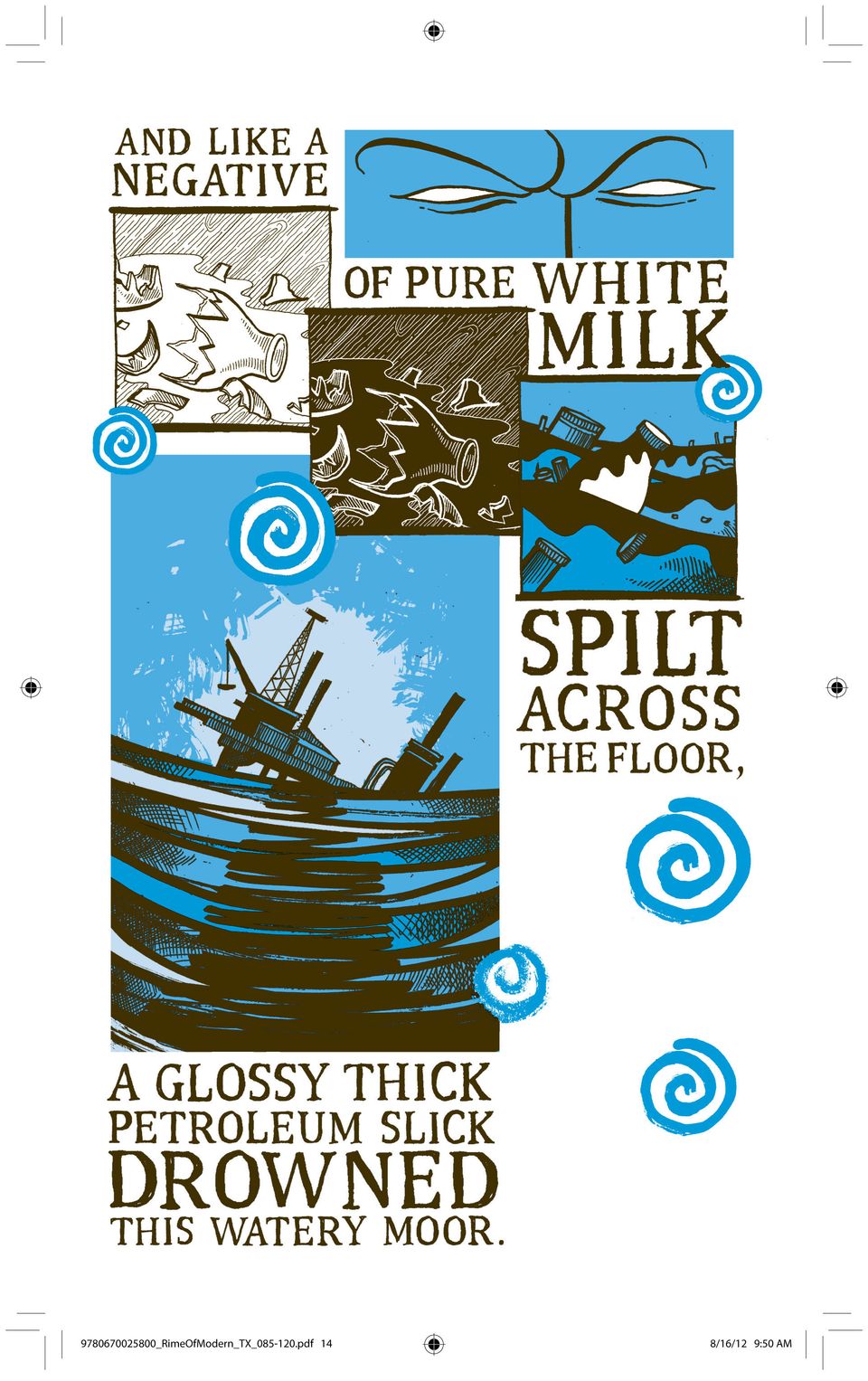