"Hey Lady, are you going to take that spot?" a voice yelled to me from a pickup truck in the parking lot of the post office this morning. I had paused for a minute, stopped by the sound of a little boy's laughter. Distracted to paralysis thinking about my boys. Where were they at this exact moment? Were they safe? I hadn't worried about them on a cellular level like this since they were babies.

I was at the post office buying stamps for our New Year's cards. I am forced to call them that now, since they didn't get out for the holidays. Normally, I'm a very prompt person. But my children's last day of school before winter break was Friday December 14th. The day of the Connecticut massacre. They had not been out of my line of sight since, seventeen days. So I was a little off my game this year.

As anyone who's ever eaten next to a table with boys under age 10 can attest, that's a lot of energy to wrangle for two-plus weeks. So for these final few days, I decided to put them in a sports camp.

"Sports PLUS camp," my older boy who hates "team" anything said, mocking me this morning.

I wonder about my reaction to the Newtown shooting. After all, it's three thousand miles and many lifestyles away from my life in Southern California. There's no Mayberry-vibe in East LA. Sure, we lucked out and got the boys into the Magnet program, a more hands-on division of LAUSD, but there's zero down-home-country-small-town feeling for my children. The idea that my kids are safe here when they load a bus and pass hyper-sexualized billboards on Sunset Boulevard, (their bus route to elementary school), driven by a bus driver we assume has been vetted by his or her union, that there won't be some tragedy every day here in "the big orange" from a car crash, to an earthquake, to a shooting, is something I absolutely turn a blind eye, ear, nose, throat and brain to. I assumed my denial reflex would kick back in at the start of this New Year. So why, today, am I such a wreck?

A week after it happened, in addition to my concern for my children's safety, I also started worrying that I was being a drama queen, overreacting, or worst of all, making someone else's tragedy about me. So rather than watch CNN 24/7 with my children tied to the furniture and doubling my Wellbutrin dosage, I decided to go to a Women Against Gun Violence meeting in the San Fernando Valley. There, mothers of young children, eyes red and swollen, revealed that they had not stopped crying since the shooting. And these women were not former actresses like me, these were normal people. Several spoke of wanting to home school, and not for religious reasons. They now felt this was the only way they might be able to regain some peace of mind. I listened, nervously plowing through all the free snacks I could get my hands on and wondered if I could even do that. When it comes to math, I am not smarter than a fifth grader and my older boy is already in the fourth grade. Licking salt off my fingers, I felt, if not comforted, at least grateful to know that the ripple effect of this tragedy hadn't just struck me. For once, I wasn't nuts. Not surprisingly, no one suggested giving teachers guns.

The pickup truck pulled past me and took the space. No problem, I wasn't in a rush, I'd park at a nearby meter. I took my bag, got out of the car, threw some coins in the slot. I was about to walk away from my car when I saw my phone on the seat. My thoughts spun out: Shit, I hope no one called. I hope no counselor from "Sports Plus" is looking for me. I hope no one wandered on to the campus of Milliken Middle School where the camp is being held and where I'm not sure I saw a security guard and walked on to the campus with an assault weapon and opened fire while I was putting quarters in the meter. I am not being glib, I really did have this thought. And I may, in fact, need to up my meds.

I hope I won't feel this way every time I leave my children in someone else's care now. I hope this overwhelming anxiety is not the new normal. Or if it is, I guess what I truly hope is that every single person in America feels this way now. I hope we are all so gut-wrenchingly anxious about the current gun laws and finally get how vulnerable we really are, whether we are 6 or 60, in a movie theater or at a mall, at a Chipotle eating an organic burrito or Coldstone licking an ice cream cone, or simply walking on the streets, parking our cars or lying on a crowded beach, and in reality at every single thing we do in a public space. That all of us, instead of popping our anti-anxiety pills, or knocking back more shots of whatever, or burying ourselves in religious dogma or divisive politics or Apple products, that what we actually do is find ways to "meet up" and "hook up" and social media ourselves into some kind of human fireball of action that cannot be stopped by benign rhetoric. That we insist on laws to protect ourselves from ourselves. That we use our justifiable feelings of powerless over the money and influence of 4 million people who cling to an antiquated interpretation of the Second Amendment and that all of us crazed, ferocious and heartbroken people do something collectively, without guns, to change the fabric of our culture in as permanent and powerful a way as these rampant shootings do to our families. 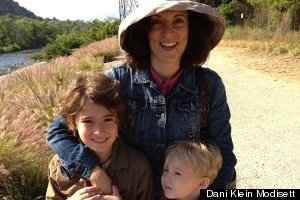 author of upcoming, "Take My Spouse Please: how the rules of comedy will keep your marriage happy, healthy and thriving"