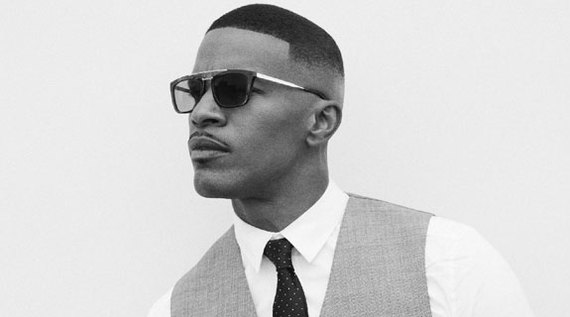 The Jamie Foxx Show premiered on August 28, 1996, a new sitcom that starred a familiar face for those who watched Jamie during his four years on In Living Color or caught one of his few appearances on the fairly popular early '90s sitcom Roc. He played himself, Jamie Foxx, an aspiring musician who leaves his Texas home for Los Angeles in hopes of his career reaching new heights in the big city. For five seasons viewers watched the high jinx that unfolded as he worked in his aunt and uncle's hotel, fell in love with the foxy Fancy, traded insults with bad-breath Braxton all while going through the highs and lows of being an artist. It's unlikely to be mentioned with the classics like The Fresh Prince Of Bel-Air or Martin, but it was a solid series.

Jamie’s acting career was beginning to flourish but much like the character he was playing, music was a difficult mistress to please. Both in fiction and reality he just couldn’t catch a break. Before the series started, in 1994 he released the independent album, Peep This. Commercially his debut flopped, no big singles, no big features, it fell completely on deaf ears. It wouldn’t be until after The Jamie Foxx Show that the actual Jamie Foxx made a breakthrough in the music industry.

While on Ellen, Jamie detailed his early days trying to break into the industry, how he would host house parties and invite all these famous rappers and musicians. There was a studio in the house so they could record if they were feeling the vibe. Think The Great Gatsby, but instead of throwing parties to lure in Daisy, he was trying to lure a big fish that could help him cause a splash into the music business. One night during one of these house parties he met a rapper with a backpack and a swollen jaw that would change his life.

In his story, Jamie says Kanye had a song for him. That song is of course 2003's “Slow Jamz” from The College Dropout. Complex did a “The Making Of Kanye West’s “The College Dropout” a few years ago, Dame reminisced on the day Kanye came to Bel-Air and told him he just recorded a song with Jamie Foxx. He was perplexed, wondering why Kanye would do a song with Jamie, he hated when actors made an attempt at singing. It wasn’t just Dame, no one was looking at Jamie Foxx to sing on their hooks, but Kanye had a vision and Jamie delivered. The song would go on to be the number 1 song in the country - breaking an already-veteran Twista, Jamie, and Kanye to the masses. Jamie and Kanye would once again return to the top of charts two years later in 2005, with the release of “Gold Digger.” Jamie did the movie Ray a year prior, highly successful and critically-acclaimed, but even before the movie’s release he had laid the hook down for Kanye. It was the perfect one-two combo to take over both mediums. The big screen was his and now he had radio once again. From singing about classic soul singers to imitating a legend, just like acting, he broke in playing a role so he could later be himself.

After the success of “Slow Jamz” and “Gold Digger” there was no denying that Jamie had commercial appeal. Ludacris didn’t hesitate to acquire the magic by grabbing Jamie to do his best Ray Charles on the DTP compilation single, “Georgia.” While the song only charted as high as 39, it felt huge in Atlanta. It was a home-town anthem. Luda would later repay Jamie by guesting on the title track on his “Unpredictable” album. The song soared to number 8 on Billboard, proving that Jamie was more than a hook man. His next two singles would also feature his old friends, Twista on “DJ Play a Love Song” and “Extravaganza” featured Kanye. When Unpredictable was released in December of 2005, 11 years after Peep This, he chartered number 2 in the first week and made it to number 1 in its second week.

There was boom of Jamie Foxx features that came after. In 2006 he sung on The Game’s “Around the World,” Diddy’s “Partners for Life” and Snoop Dogg’s “Psst” - all three landed on pretty big albums. None were bigger than T.I.’s 2006 King album. Jamie brought the heartfelt soul that assisted in making his “Live In The Sky” single a fan favorite. The biggest moment of his career wouldn’t come until 2008, when Jamie teamed up with T-Pain for “Blame It,” the second single from his third studio album. The song needs no introduction or explanation, no matter where you were in the world the song reached your eardrums. Jamie and Pain were radio darlings at the height of their reign, together the record was destined to be a smash hit. The song would go platinum and reached number 2 on Billboard Top 100, but would stay number 1 on the Hip-Hop and Hot R&B charts for 14 consecutive weeks. People have been blaming the alcohol for decades but Jamie was the first to turn the sentiment into an Auto-Tune pop smash.

Jamie went from playing an aspiring musician to being a voice heard all across the globe. From 2003 through 2008 he was on a prolific run, commercially at his peak, and while the critics never favored his albums, the hits that he gave us are undeniable. But after his 2008 album, Intuition, things slowed down for Jamie. Even though his 2010 Best Night Of My Life gave us “Fall For Your Type” and “Winner,” neither record reached the heights of his previous hits. And then 2015 Hollywood: A Story of a Dozen Roses didn’t make much noise at all. Even though movies like Law Abiding Citizen, Django Unchained, and White House Down were huge at the box office, Jamie was no longer in the spotlight and his celebrity was no longer moving big units in music. He struck while the iron was hot but it had cooled down.

A new era of R&B has taken over since the height of Jamie's moment. The fun, sensual R&B music that once took over the airwaves now feels like it's from an ancient time. The singers that are hot today are a different breed, their affinity for drugs and sex is more Rock & Roll than R&B, but it's the times that we live in. It's been a little over a decade since he broke onto the scene but just that quickly Jamie is no longer the man to call when you want a hit. It's more likely that his phone rings for movie roles than music features. It's not a bad thing, he had his time, he had an admirable run that gave music to the clubs and the bars and also the couples in love and couples in lust. When the hits stop, when the moment ends, we're able to look back and realize how big that moment was.

This article originally appeared on DJBooth.

By Yoh, aka Steamin" Yoh Beamen, aka @Yoh31. Image via RCA Records.