In August of 2013, the Bureau of Labor Statistics reported that there were 7.6 million people working in part-time jobs due to economic reasons.* Of those 7.6 million workers, 17 percent, or 1.3 million, were between the ages of 20 and 24. The economic downturn and slow recovery from the recession have hit this demographic particularly hard, as I've explored in other posts that look at full-time employment and unemployment. However, another important part of the economic picture is the increase in the number of part-time workers in this age group.

A report from earlier this year showed that 62.9 percent of millennials were working, and of that group, 31.2 percent had part-time jobs. The report was conducted by Harvard University's Institute on Politics, Mobilize.org, The Center for Information and Research on Civic Learning and the National Conference on Citizenship. Additionally, data from the Bureau of Labor Statistics show that after 2008, there was a jump in the number of adults ages 20 to 24 working part-time due to economic reasons. In August of this year, there were 1.3 million young adults working part-time. However, in looking at other demographics, the trend is similar: Numbers for individuals 25 years old and above in part-time employment have also gone up since 2008. Speaking at an economic forecast panel at The Commonwealth Club, John Silvia, chief economist at Wells Fargo noted, "...it's interesting that part-time workers compose a greater percentage of the U.S. labor force than we've seen in the past, in terms of economic recoveries." (Text continues below graphs.) 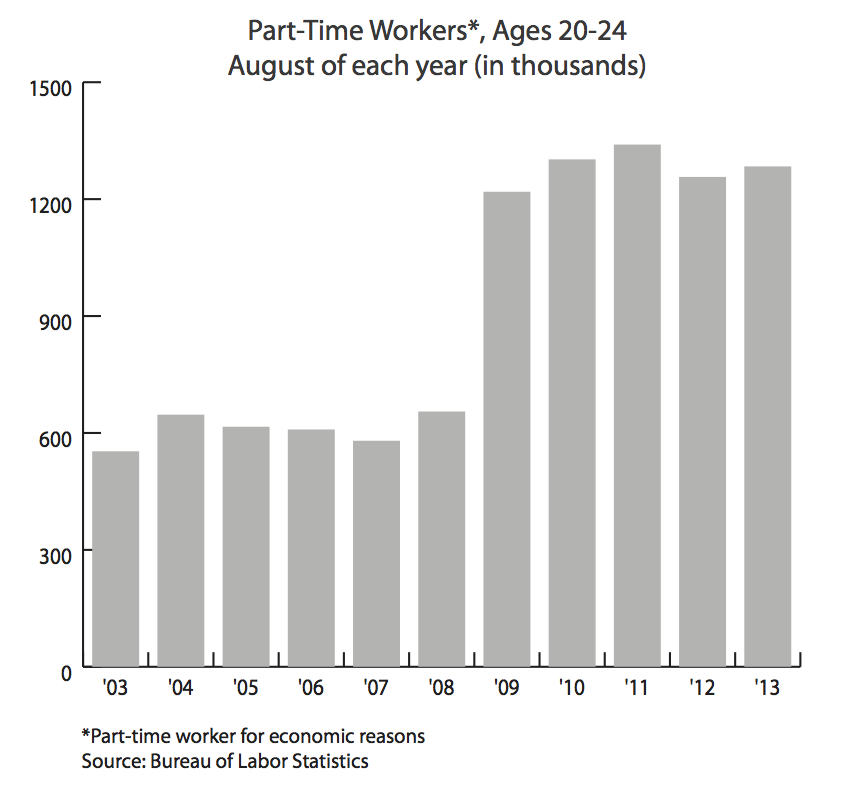 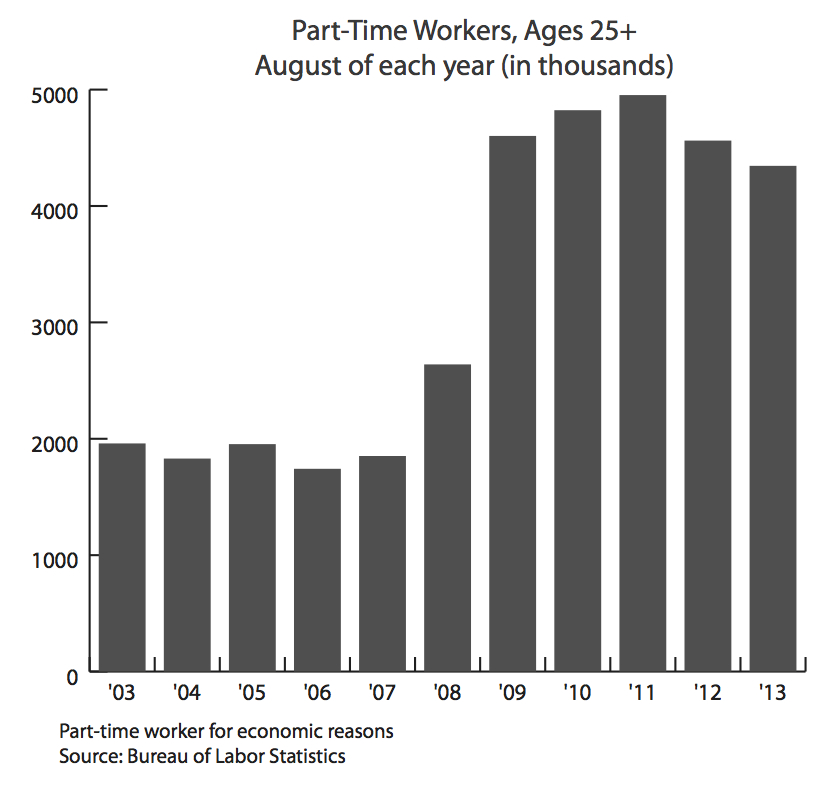 So what makes the younger demographic different? It's not simply the increase in part-time work, according to Heidi Shierholz, an economist at the Economic Policy Institute, a think tank based in Washington, D.C. Shierholz points out that part-time employment has increased across the board, and that's a result of weakness in the labor market. She added that the increase in part-time work is a cyclical phenomenon as opposed to a structural change within the economy. "Lower quality jobs are the ones growing disproportionately right now and that's what happens when the labor market is weak," Shierholz said. "In better times, workers don't have to accept those jobs. In a time like this, they have no choice."

For younger workers, the lack of options in today's labor market has long-term consequences. Shierholz said that in any economic time, within a certain demographic, there are shares of people who do well, shares who perform on average, and shares who do poorly. "At a time like this, a much larger share of the cohorts who enter the labor market during a time of weakness are going to do poorly," she said. "It's only their back luck to be born at a time that dumped them into this labor market as new entrants. That means that on average, these cohorts will have worse outcomes."

As in most economic times, this particular downturn is no different in effecting demographics within the cohort differently. The groups of part-time workers by race and gender show stark differences: For ages 20 to 24, white males are the highest in raw numbers working part-time for economic reasons. The lowest numbers are of Asian males. Gender gaps have also been persistent for all racial and ethnic groups, with women faring better than men. However, it does seem that in recent years, the gaps are narrowing. 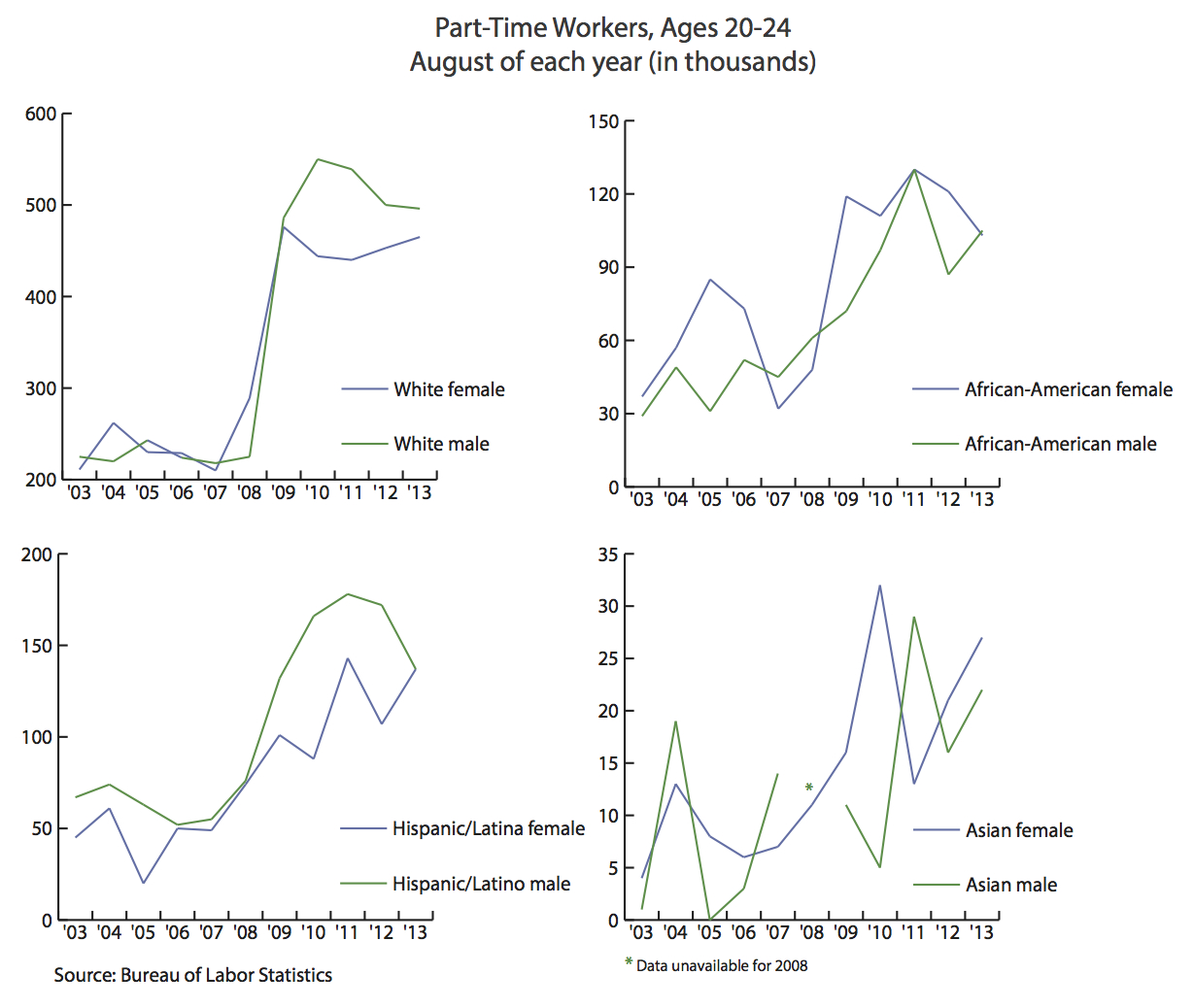 Similarly, there are differences along gender and racial/ethnic lines in the numbers of unemployed individuals, ages 20 to 24, who are looking for full-time work. In this case, the gender gap isn't narrowing in all instances: For whites and Hispanics/Latinos, the gap in 2013 was wider than in earlier years. 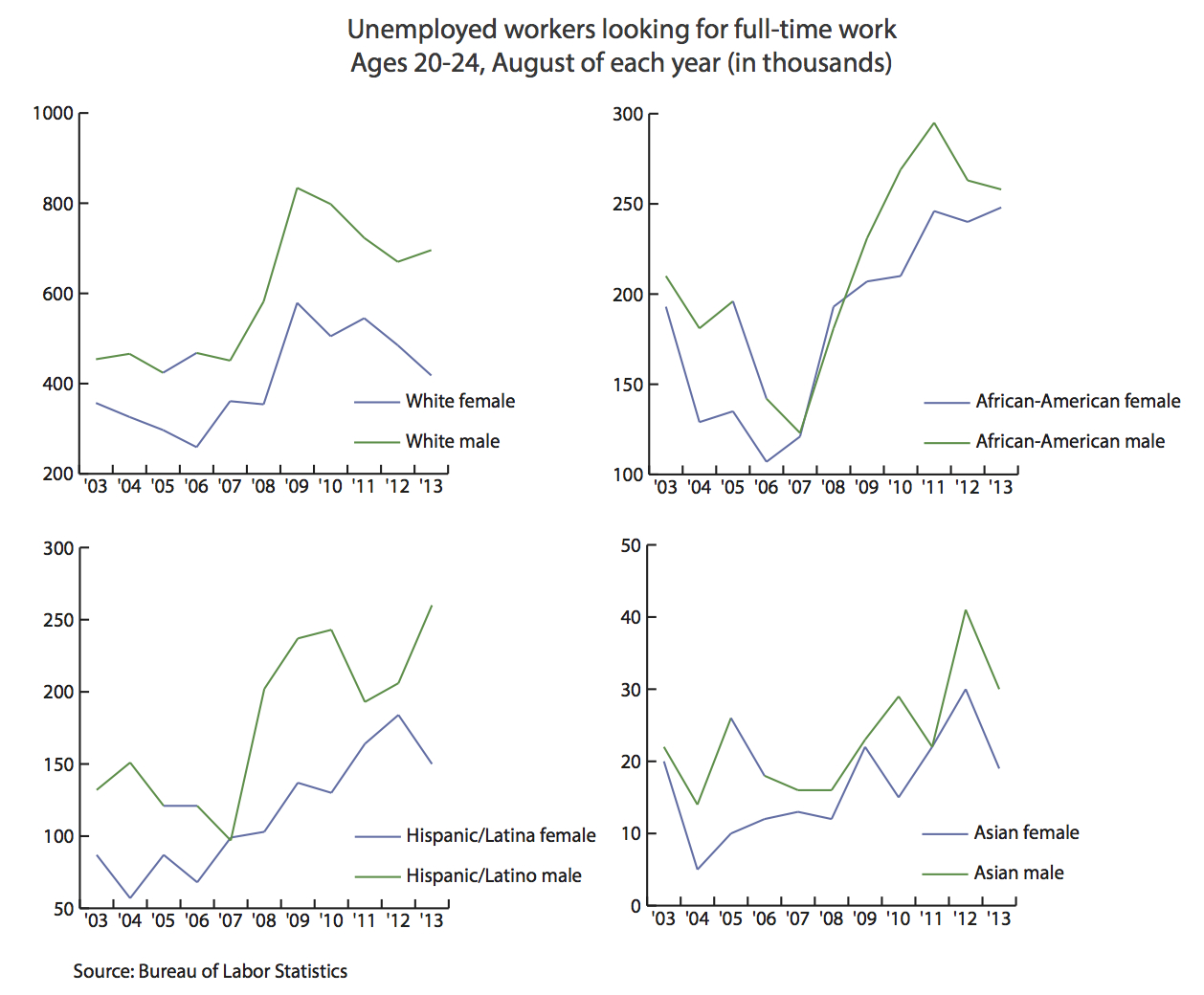 Let's hope we get there. In the meantime, however, the effects of the economy will have very real long-term consequences. For young adults, the biggest impact will be lower lifetime earnings on average. "If you have one or two decades of low earnings, you're never going to get that back," Shierholz said. That means taking longer to pay off student loans, not being able to invest in assets like homes or cars, and not saving as much for retirement, if at all. On a personal level, the prevalence of part-time employment can also mean not getting the type of professional growth or training that people would expect in their 20s. As such, the ability to move up the career ladder later in life becomes less possible.

So are millennials doomed? The numbers would suggest so, but that's not necessarily the case. Tough times and lack of options open up creative opportunities for entrepreneurship and innovation, and there are individuals who are able to take advantage of that. The obvious reality is that not everyone will be to do so. But this particular economic situation tells us at least two things: one, that the labor framework that worked for our parents will most likely not work for us, and two, that as a generation, we need to support one another. We've all been dealt this hand, and each of us is trying to figure out how to play it -- maybe we can prove the numbers wrong by working together.

*That's the most recent data available. The Bureau of Labor Statistics would have released numbers for September 2013 in early October. However, the government shutdown prevented them from releasing that information.