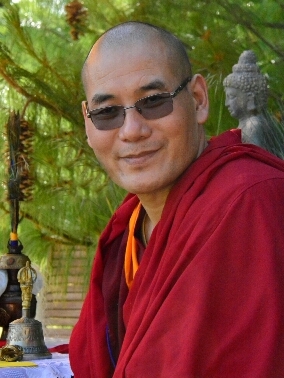 Phakyab Rinpoche, a high-ranking Tibetan lama living in Jackson Heights, Queens, tucks his feet under him on the carpet of his living room-turned-temple and recounts how it all began. He was 13 and living in post-Cultural Revolution Tibet in the late 1970s, when the Future Buddha, Jampa, also known as Maitreya, came to him in a dream.

"Would you like to come to my place?" the tall deity, believed to be the fifth in a line of Buddhas, and who Buddhists believe will come in the future, asked the young man. "There are mountains there and on top of the mountains there is a real monastery with lots of floors."

Rinpoche was intrigued. The things they called monasteries in his town were all in disuse or used instead as granaries by the townspeople. There were no lamas and people couldn't even carry prayer beads. Still, not having grown up with the tradition, he was pulled toward it, he recalls.

The young man says he went with the deity on a walk until the most beautiful mountains he had ever seen appeared to him. They were covered in wildflowers of every variety and color. They walked up the incline of one mountain and came to a level place, then ascended again. The whole mountain was shaped this way - walkable inclines broken up by plateaus. Along the way, they were joined by Tsongkhapa, the founder of the Gelugpa or Yellow Hat Sect of Tibetan Buddhism in the 14th Century. The order is now led by His Holiness The Dalai Lama. Many believe Tsongkhapa to have been a Buddha himself.

When he arrived at the monastery, he found it amazing. There was life and activity, unlike the shells of monasteries that remained in his town. It was filled with the sights and sounds of a place of learning and service.

The future Buddha and Tsongkhapa told the young teenager he could stay if he liked. "You are welcome here," they told him, he recalls. Though he loved his family deeply, he knew this was home, he says.

And then he woke up.

"I thought, 'How could this happen? ' he says now. "I had so many emotions. My heart was empty," he says, trying to express the sadness he felt that it was just a dream and it was over.

He approached his father and told him he wanted to be a monk. "Are you crazy?" his father responded, he recalls, laughing at the memory. "Look around you. There are no monasteries." Not only was there no place to study, but no one in his family had ever chosen that path. Yet the boy who would become the Rinpoche was determined.

He visited a family friend who was a tailor and eyed his scissors. "Cut my hair!" he demanded of the man. The tailor refused, noting how angry Rinpoche's father would be. So with that, the teen grabbed a pair himself and began chopping away at his shoulder length locks. As he left the tailor called after him to be sure to tell his parents it was he himself who took the shears to his mane. It must have been quite a sight, he remembers, because when he returned home, all his mother could do was laugh at him. But his determination apparently moved his parents.

A year later, China temporarily eased the restrictions they'd placed on the culture. The monastery in Rinpoche's town reopened. A festival was held there and his family took part in the celebration. Not long after that, he was ordained.

But it wouldn't be easy. When the lama, Geshe Aki, tried to teach him tsa lung meditation, which would be so important to saving Rinpoche's life one day, the teacher handed him a book. "I don't understand this, I can't read," Rinpoche told the venerated teacher, who had taught at the monastery prior to the Cultural Revolution and continued a solo practice during the restrictive times, hiding in the mountains outside the town and meditating on his own. He'd returned even more adept than before, explains Rinpoche.

"Oh you keep it," Geshe Aki told him, he says. "It is good for you and some day it will help you. And you will teach many people," he said, telling him to secret it away for now. The lama died a year later.

It is the knowledge he eventually mastered in that book which allowed him to practice the same kind of meditation it described for many hours a day for 10 months, saving him from a grave illness 20 years later, he says now. "I think he knew what would happen to me," Rinpoche says.

By 2003, Rinpoche had emigrated to the United States. Thirty-seven years old now, he had been badly injured from beatings in a Chinese prison -- just for practicing his philosophy and teaching others. His wounds were so bad that he had developed gangrene on his right foot and leg. He managed to escape to India, and ultimately made his way West.

Here in New York City, he sought the advice of three different orthopedic surgeons who all gave the same advice: amputate or risk death. While the Holy man did not fear death, he told me later it didn't make sense to him to lose a leg -- even in one lifetime of the many he believed he would have. Tibetans practice longevity yoga in each lifetime and are not cavalier about each chance they have upon the Earth.

Rinpoche had been named the Eighth Incarnation of the Phakyab Rinpoche by the Dalai Lama himself when he was working toward the highest level of Tibetan Buddhist study, the Geshe degree, in 1993. Rinpoche is an honorific title given to those lamas His Holiness believes achieved their reward in the last lifetime, ending the cycle of reincarnation. However, these souls choose to return to Earth to help more people out of samsara, or suffering. For this reason they are known as The Jewels or The Precious Ones. Rinpoche thought it would be wise to reach out to his mentor, Tenzin Gyatso, or Ocean of Wisdom, the 14th Dalai Lama, about such an important decision.

The Nobel Prize winner's response was not to amputate. In a letter, he reminded Rinpoche that he was a virtuoso of the tsa lung form of meditation and could heal himself. He wanted him to try, then teach others the value of the ancient practice. He gave him additional mantras to say and wished him his protection.

Tsa Lung involves the practitioner imagining a purifying wind clearing out all of the channels of the body. And so Rinpoche began.

For twelve hours each day, continuous except for meals, he would diligently focus on clearing his own body with the metaphysical wind. In the beginning, his leg oozed black. A few months into the practice, the liquid turned cloudy and he began to bruise. His leg and foot began to swell thereafter and became more painful. There was a foul odor.

Nine months into the discipline, the unthinkable happened. The wound had a clear liquid running from it and the swelling subsided. Before long he was tenderly putting some weight on the leg. At 10 months, he got a pair of crutches and began to walk. He dropped the crutches one at a time and at the year mark he could walk again.

Not only had Rinpoche reversed his own gangrene -- something never recorded in the history of medicine -- his diabetes and tuberculosis were now gone as well.

Dr. William C. Bushell, an MIT-affiliated researcher and director of acquisitions for the new ISHAR (Integrative Studies Historical Archive & Repository) enormous online library founded by Dr. Deepak Chopra, explained the medicine behind the miraculous recovery previously for me in The Daily Beast. "This is a cognitive-behavioral practice that present East-West science suggests may be more effective that any existing strictly Western medical intervention," he said. Gangrene cannot be cured by current medical intervention at the stage of that suffered by Rinpoche.

The lama has been undergoing tests at New York University and science hopes to learn all it can from his recovery. A book about his life will be published this October in France titled Teach the World How to Heal. It will be followed by an English translation and additional languages in the future.

His monastery in France is called Menla Thodol Ling and the website is: www.phakyabrinpoche.org. This website is only in French.

I thank Rinpoche's senior student, MaryAnn Zitka, for arranging this interview and helping with interpretation.

More:
GPS For The SoulMeditationChinatibetan buddhism
Newsletter Sign Up