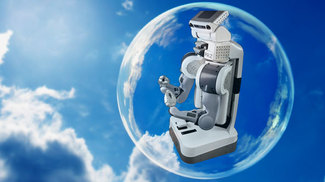 I've written a few times recently about trends in manufacturing, whether it's a rise in mobile analytics or the rise in cloud based systems.

The most intriguing however has to be the changing nature of robot usage in our factories. Now, of course you will say, we have had robots in our factories for ages, and whilst the number is increasing dramatically, this is undoubtedly true.

What makes it interesting however is the capabilities of those robots. I've written previously about the latest developments in robotic learning, whereby robots are now capable of learning new skills very rapidly simply from observing humans performing the task.

A good example of this in action is given by the Japanese company Fanuc. Their industrial robots are capable of figuring out the best way to perform a particular task in a matter of hours.

The machine marks a significant improvement on current robots that need extensive programming in order to perform the precise tasks required of them. The Fanuc approach can potentially save huge amounts of time in this 'teaching' phase.

The robots use deep reinforcement learning to rapidly pick up new tricks by brute force of continual trial and error. After just eight hours of training it's capable of around 90% accuracy.

This becomes really useful because the robots are capable of instantly sharing their knowledge with their 'peers'. It's an approach I wrote about last year when Rethink Robotics used an array of cameras and sensors to look at objects from a range of angles, and then shared that learning and experience with others.

There are currently around 300 of these kind of robots in operation in various labs around the world. The Rethink team hypothesise that if this relatively small cohort can examine objects using both arms, it could be possible for 1 million objects to be 'learned' in just 11 days.

It's an approach that goes by the name of cloud robotics and is a major trend in robotics today. As Fanuc is such a heavy user of robots it is particularly well placed to capitalize on this trend.

Suffice to say, despite the enormous promise in this area, it is still early days. The modern factory is an incredibly complex domain, so robots will need to master tasks that are much more advanced than merely identifying objects.

Ramping up that skillset will be a significant undertaking, but as the knowledge can be shared incredibly quickly it is surely worth the initial effort. Whilst the fruits have not yet appeared, it is surely only a matter of time.