I love comedies. I am always happy to go to the theater and see good lighthearted fare. I like dramas too, but I see more of them. Very few major nonprofits or commercial producers present original comedies that do not sing (literally).

And by "comedy," I am not referring to a "dark comedy" where the laughs come after the show when you really think about it. I mean the kind of piece where you laugh throughout because what you're seeing is funny. Of course, there are the shows that are both dark and actually funny. The Lyons comes to mind. But more often than not we're stuck somewhere in between drama and, well, something else. The light comedies that do get produced are often foreign farces, not shows that originated in the States.

This is a reason I've been so happy with the success of Vanya and Sonia and Masha and Spike -- it shows the supremacy of silliness. Another show that does the same is Nell Benjamin's The Explorers Club, recently extended at Manhattan Theatre Club's Stage I. Set in a luxurious room created by one of my favorite set designers, 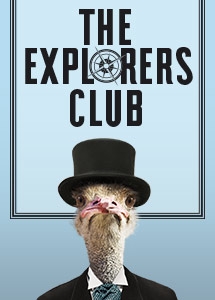 Donyale Werle, and buoyed by a fantastic cast (including Jennifer Westfeldt, John McMartin and Lorenzo Pisoni), the show makes the audience laugh. I was a little disheartened to see Charles Isherwood did not appreciate the humor, but happy the show has been well-received by others.

Over the years, I've seen all of Benjamin's works as a lyricist, from The Mice to Legally Blonde. I've found her lyrics to be clever (see Sarah, Plain and Tall), but I genuinely did not know what to expect going into The Explorers Club. What I saw was a madcap diversion -- a hilarious way to take your mind of your troubles (for a couple of hours at least). Do you really need anything more?

There is a place for all sorts of shows. I love discussing heavier shows after the lights go up. I enjoy finding the perverse humor in an awkward moment. But there is room for all out comedies. I think part of the reason we don't see more is that people don't want to pay such a high price for something so frothy. They can turn to TV for hilarity; they want their non-musical theater to be more substantial. I disagree with this way of thinking for one simple reason -- I believe that potential enjoyment should be a reason to attend the theater.

I therefore encourage you to see Vanya and Sonia and Masha and Spike, The Explorers Club and other comedic entries that I'm not mentioning here. I hope to see more American-bred high class foolery in years to come.