Three years ago, I was lying in bed with a terrible flu, flipping through the channels on TV to pass the time. I came across an episode of Piers Morgan Tonight featuring an independent filmmaker, Edward Burns, talking about how he made his new film, Newlyweds, on a low budget. At that point in my life, I was a senior in college and just getting my toes wet in the entertainment industry. I didn't know much about TV/Film production; I just knew that I wanted to make films and I didn't have the money to do it.

When I heard how Ed Burns made these story-driven independent films with a micro-budget, I knew I had to learn from him. From that day on, I watched his movies, listened to his podcasts, and read his screenwriting book. I did everything I could to educate myself on independent filmmaking. At the time, I was interning for Leftfield Pictures, a production company based in New York City. When I walked from Penn Station to the office everyday, I carried that book in my hand, hoping that I would run into him on the street and have the opportunity to give him my 30-second elevator pitch about why he should take me under his wing. That day never came, but it made me work harder.

During my time at Leftfield Pictures, I spent most of my time transcribing interviews, making cold calls, and going on coffee runs. Don't get me wrong, I know that's the kind of grunt work an intern does, but I knew I was capable of shooting and producing my own content. When I finished my office work, I spent my free time researching independent filmmaking and tweeting at Ed Burns, telling him that I was going to work with him one day. That internship taught me what I did not want to do in the entertainment industry. Sometimes you have to learn what you hate to find what you love. 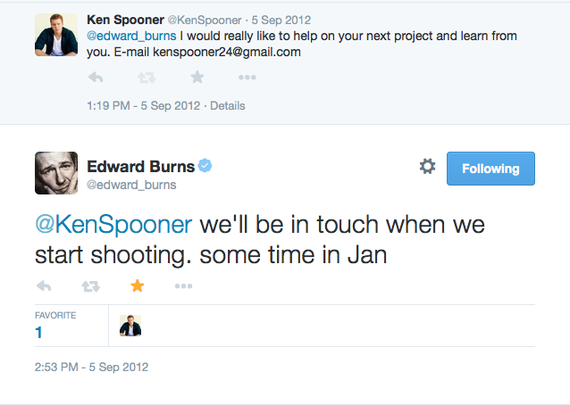 Fast forward to 2015. I had spent three unsuccessful years reaching out to Ed Burns, but I was lucky enough to have the opportunity to make my first short documentary called "To Be Strong," about a young man's fight with cancer while training to be a boxer. My friend and I shot this film with a Canon 5D on a micro-budget of $3,500. We didn't have a studio so we edited it on a laptop in my basement and recorded voice-overs into my camera. We were just a couple of small-town guys trying to tell a story with what we had, and what we had was the bare minimum.

"To Be Strong" brought home "Best Documentary" in the Jersey City International Television and Film Festival, got accepted into the Garden State Film Festival, and won the first two rounds of the Katra Film Series in NYC. When we got to the final round of the Katra Film Series, we were competing against the top 16 films of the year. Every film entered was shot on the RED with a decent budget. We had the lowest budgeted film, but we competed with the best that night.

During the intermission at Katra, I met a man named Glenn. He told me how much he loved "To Be Strong" and he asked me who my inspiration was. Without hesitation I said Ed Burns. Glenn looked at me with surprise and told me that, a couple days prior, he was an extra on the set of a show called "Public Morals," a 1960s crime drama written and directed by Burns. I asked Glenn if he had any information about when and where they were shooting. He didn't know off- hand, but he gave me a casting number to call to find out the call-times and shooting locations. I called the next day and got all of the information I needed.

I stayed up late on Sunday night writing a letter to Ed Burns, telling him how much his work has inspired me as an independent filmmaker. I was hoping that I would be able to make my way on set to hand the letter to him. One thing I learned in life is that if you act like you belong, no one will question you. I had that in mind while heading to set on the lower West Side the following morning.

Due to car troubles, I missed the first two trains into Penn Station and my day wasn't off to a great start. I finally made it to the shooting location around 10am. As I approached set, I saw a PA locking down the street, not letting anyone through. I told him I was a PA for the day. He shook my hand, introduced himself and let me through. The street was full of actors, extras, cameras, and a bunch of people I didn't know.

I was just trying to stay out of the way, taking in everything that was going on around me. A staff PA named George approached me and asked who I was and I told him that I was helping out on set. He started to ask me more questions and I started to run out of answers. Finally, I told him the truth: that I wanted to get more experience and that I wanted to learn. He looked at me for a second and I thought for sure he was going to tell me to leave, but instead, he hired me on the spot.

Before I knew it, I had a walkie-talkie in my hand and was being introduced to all of the other PAs on set. George gave me a chance to prove myself and I will be forever grateful for that opportunity. It's not everyday that a stranger puts faith in a person he or she has never met. I was now on set with Ed Burns as a paid production assistant, watching him direct scenes and acting in them at the same time. When the last afternoon scene was over, everyone went to lunch and George put me on "Firewatch." I was responsible for looking over all of the equipment, making sure that nothing got stolen or caught on fire. Big responsibility for a brand new PA hired ten minutes prior.

Before Burns went to lunch with everyone else, he had an on-set interview with Entertainment Tonight and I was off camera, listening attentively to everything he said. I guess you can say my Firewatch took second priority at the time. My heart was beating fast because I knew that when the interview wrapped up, I was going to have my opportunity to introduce myself and hand him my letter.

When the interview ended, I waited a few moments trying to think of exactly what I was going to say. After all, I had waited 3 years for this opportunity and it was finally here. I went right up to him, extended my hand and said, "Mr. Burns, I just wanted to let you know that I am a student of your work and I think you are a tremendous storyteller. I'm an aspiring filmmaker and, believe it or not, twenty years ago you were in my shoes. Thank you for being an inspiration." Before he could respond, I took out the letter from my inside coat pocket and said, "You want to know a secret? I came from North Jersey to hand you this. One of the Staff PAs hired me on the spot about twenty minutes ago."

Mr. Burns told me that he was very impressed. He shook my hand and went off to lunch. Later that day, Aaron Lubin, one of the Executive Producers on the show, came up to me and asked me if I was the aspiring filmmaker. I said yes and he asked me if I wanted to stay on set for the remainder of the production.

I worked really hard the next few days, learned a lot, and met a bunch of great people who will be my friends for life. One thing I have learned is that you must capitalize on opportunity. Amazing things can happen.