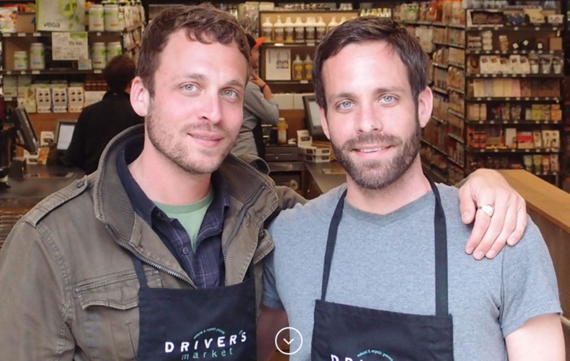 It's not every day that two grocery store employees will go back to school and transform themselves with the help of their entire family into the future owners of that same grocery store.

Formed by a vision for a better and healthier experience for customers, these two young men transformed the previous grocery store on Caledonia Street in Sausalito into one founded on the principles of health, well-being, and direct information about the food customers consume.

Yes, the aesthetic is appealing and the product offering thoughtful, creative and most certainly healthy, but this is not what spiked my interest. It was the impressive set of core business values that sets this business apart from your everyday grocery store and compelled me to share their story.

The previous owners of the market had decided not to renew their lease without warning, causing all the current employees including Adam and Graham Driver, to re-think their career and income strategy. While this could have been a blow to their careers, instead it was the match that lit the fire that is now powering their careers forward. Adam realized that this was his chance to move towards creating something for himself, not just following another's lead. Or, as he put's it, "shifting from being part of something to creating something." He began to formulate a vision of a market free of all the issues he saw as an employee; an idea for how to transform the now defunct business that had operated there since the mid-1970s, and was apparently loved and needed by the residents in Sausalito.

Adam approached the landlord and said that he was interested in taking over the space. Learning he was competing with other major players in the retail space, he realized it would be hard to move quickly enough to close the deal and resigned to the fact that he may not be able to do it right then. What seemed like a strike against him, would prove to buy him the time he needed to gain the skills he needed. While he had been taking entrepreneurial classes at The College of Marin, and City College in San Francisco, his background was in Theatre, not Business. He felt he needed to change his knowledge of business if he were to succeed in such an undertaking.

Somewhat letting go of the thought that he would open up the market, he continued to push forward in his path towards running a business. He enrolled in the Green MBA program at The Presidio Graduate School, one of top five Green MBA programs in the US. This chance for him to continue his education and work towards his goal of having an impact on society while utilizing his business knowledge was exciting and inspiring. The prospect of the market on Caledonia remained in the forefront of his mind, but it was unclear if it would still be available when he finished his degree. Regardless he pushed forward with the MBA program and soaked up every bit of knowledge and entrepreneurial challenge he could.

One year later, the market landlords were still eager to find the right tenants. The longtime Sausalito family who owns the large building was still without a tenant. They called Adam and explained how the retailer who was planning to take the space had backed out. If he was still serious, they felt he could be the right fit to take over the building and transform in into something that would benefit the community. With a year to go in the program at Presidio Graduate School, this posed yet another interesting dilemma. Stay in school, or jump on the opportunity to get the market? After counseling with friends and family for some trusted advice, the consensus was that he should stay in school. He let it go, again, and jumped on a plane back his hometown Ann Arbor, MI.

Sitting 35,000 feet up in the sky, he had an epiphany. "This opportunity was why I went back to school in the first place. Now it's presenting itself to me as a real option, and I'm going to say no?". "No!" he said, as he woke up his friend sitting next to him, and said: "let's do it." He hadn't graduated but had gained a year of knowledge and connections.

He took a leave of absence from The Presidio Graduate School and called up his mentor and to be future business partner Paul Geffner. They discussed the prospect of actually making his dream for the market happen. The considered several things. Was it realistic to open a grocery store where a grocery store had just closed its doors? Was there enough demand to support a grocery store that was determined to follow the triple bottom line business model, of People, Planet, and Profit? Several Whole Foods Markets are close by, along with Trader Joe's, and other local markets; maybe the last market closed because people were shopping there instead. But, as a past employee, it closed for reasons he knew he could change. He knew that it was in high demand, and closed due to low technology and customer service, not because people didn't want to shop there.

Adam and Paul approached his father, Clint. Paul's advice for Clint was that if this were his son, he would put everything he had into the idea; it was golden. Clint agreed. They called the landlord and said they wanted the space.

Adams brothers, Graham, and Eric decided to drop everything and build out the market. The Drivers stripped the building to its bones, updating electrical and mechanical systems and installing modern kitchen and storage facilities. New windows opened the space up to the street frontage and natural light. Plans for a parklet were drawn up. 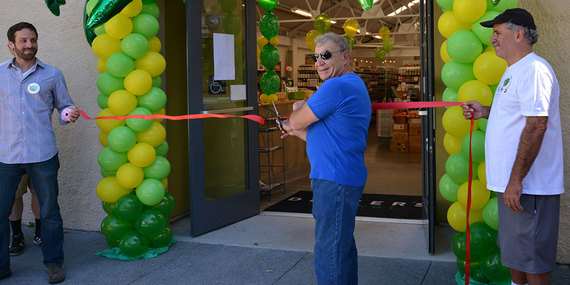 In May of 2012, Drivers Market opened its doors and began working to achieve their mission to connect people with one another and to the foods they eat. Three years later, Drivers Market is full of customers.

Products are meticulously evaluated to ensure they meet a high level of certifications and social awareness. Everything is high quality, and while that can affect the price at times, those who shop here can trust they are getting the best. However, not just the best quality food to eat, food best for the planet as well. Extra steps are taken to ensure not to source products from any multi-national corporations. In particular, any products affiliated with Monsanto products. Smaller brands owned by larger companies producing GMO products will also not be on the shelves. Their products are GMO-free, inequality free, and pesticide free. They have a regular blog listing their favorite vendors who share their passion.

In addition to raising awareness through the products for sale, regular events are held by those in the community promoting sustainable practices.

The market is thriving, and they created it. Adam and Graham can be found most days, on the floor managing the store they used to be beholden to as employees. The computer systems are fast and modern, and the customer service is friendly and knowledgeable. Most importantly, they are open for business to the people of Sausalito, who love having a local market, again.

If you are in Sausalito, pay Drivers Market a visit at 200 Caledonia Street, or online at www.driversmarket.com.

I have made a point to try and write about businesses with impact on their communities, and the world as a whole. I feel that this is an excellent example of just that, but with the added addition of an inspiring entrepreneurial story. If you know of a similar business or story, please contact me. I would be happy to hear from you, please send me a note.