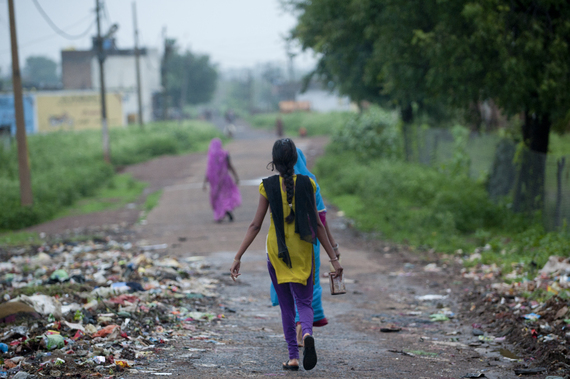 An article in Thursday's New York Times on the rise of so-called "superbugs" -- antibiotic -resistant infections -- in India points again to the horrific side effects that poor water, hygiene and sanitation can have on a country.

India has the highest level and number in the world of people who do not use toilets. Some 597 million people, or roughly 50 percent of the population, according to UNICEF and WHO's latest estimates, defecate in the open.

Which leads us to the "superbugs." People living in India are more prone to bacterial infections because -- due to open defecation -- the places where they walk, the water they drink, the food that they eat, is more likely to be contaminated with fecal matter. To address the infections, and other fecal-oral illnesses, doctors give them antibiotics. And then the infections become antibiotic-resistant. This is very dangerous to all, and particularly to children.

Apart from deaths from superbugs, India's children suffer serious consequences due to the environmental contamination. Levels of stunting and of child mortality from various causes are extremely high.

In many countries, open defecation is a hidden problem. Hidden among the poor, in rural areas, or remote villages. But it should not be hidden away from public discourse; should not be delicately alluded to in hushed conversations; cannot be left to stink any longer. People have to stop hiding about what is done in the bushes, ponds, rivers, and fields around them.

Fortunately, India is taking action. People are now talking more openly about open defecation. The Government of India is making open defecation central to its agenda for the next five years, planning to work to wipe out the practice by 2019, in time for the celebration of Mahatma Ghandi's 150th birthday. On the same day as the New York Times article, Time Magazine named one of UNICEF's creations, "Mr Poo", who talks about the 's' word in an online-game, as one of the 15 most influential fictional characters in 2014.

But India is not alone -- it only has a bigger feces problem, because of having a bigger population than most.

The open defecation problem has got better in the world, but in 26 sub-Saharan countries in Africa, the numbers of people who defecate in the open are increasing. India and nine other countries make up 82% of the 1 billion people in the world who practice open defecation. The others are, in millions: Indonesia (54), Pakistan (41), Nigeria (39), Ethiopia (34), Sudan (17), Niger (13), Nepal (11), China (10), and Mozambique (10).

It is a massive problem, but it is not an insuperable problem - if resources are made available and appropriately targeted. China managed to bring access to improved sanitation to 623 million people between 1990 and 2012. Ethiopia brought open defecation down by 55% between 1990 and 2012 -- from 92% to 37% of the population. Nepal, Viet Nam, Cambodia, Angola -- all have made great strides, proving that it can be done.

But it will be done only by confronting the problem head-on, and acknowledging what it is doing to our people, to our countries, to our world.

It is not a joke; it is a matter of life and death, and too often tragically, it is the deaths of our youngest and our weakest.